September 24, 2019
by Katie Morris
Enter your password to view comments.

So this weeks workshop was a little different to sitting in the MacLab or a lecture theatre, but its purpose was to build on the ‘effective communicator’ aspect but in other environments. Your role as a primary school teacher isn’t only about engaging with children but also having a good rapport with adults too.

Using the natural resources around us and minimal resources we had the task of creating a den in 45 minutes.

This is our creation River Shack… 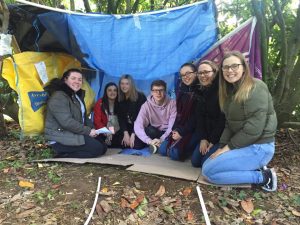 Although we did not appoint a group leader i felt that a couple of our team members took that role upon themselves.

They directed everyone different tasks to get on with, and seemed to take control of how we were building this den, however they did also listen to everyone’s ideas.

I feel like they were more involved than others, however nobody was excluded and everyone’s ideas were listened to.

It was hard to keep 100% focus on the task as i was trying to get to know the people I was working with.

I think that all was explained well and clearly and we all knew what had to be done to create our den.

At the start we collected all of our resources we wanted to use and stood looking at everything deciding what was the best idea as we had to consider the size we had to make it and the best structure to hold everyone inside.

I feel that all stages of the 5p’s were met, however I felt the presentation part could have been communicated better.

I felt that everyone in our group shared and listened to everyone’s ideas, so nobody was excluded, we also all had to help physically build the den. Apart from the odd screams when a wasp or spider appeared by our den we communicated well as a team.

As everyone was not all together due to some members of our team dealing with negotiating side of the task it was harder to get everyone together to share ideas and things had to be repeated more than once.

As everyone was off doing their own thing it was difficult to gather everyone together and get people to listen as things had to be repeated more than once on some occasions. It was not very difficult as the area we decided to build the den was quite excluded, far away from the other dens.

I think yes as there was dog walkers close by and wasps flying around so made it hard to not get distracted and keep focused. I think that a way to overcome this is to keep eye contact with the speaker as you are solely focused on them and not your surroundings.

Our negotiation was to swap one of our team members for another groups, and we were unfortunately unsuccessful. I believe this was due to everyone being so focused on building the dens and getting to know their own team members and the fact that no-one from our team really wanted to leave.

Welcome to my first post as a BA Education student, this is the place i can share and reflect on my experiences throughout the next 4 years and i couldn’t be more excited! Coming straight from high school, I didn’t really know what to expect, but luckily everyone has been so welcoming.

I feel that my 2 week placement at the end of October will give me a real insight to how a primary class room operates, what children learn and the challenges facing teachers. It will allow me to observe and experience the everyday running of a primary classroom, but also give me the opportunity to speak to teachers who can give me advice.

I am currently feeling quite anxious for my placement as I don’t know what school i’ll be attending until closer to the time, but i always like going into things with an open mind and i cannot wait for the experience again after furtherly enjoying 2 years of work experience in primary schools prior to this.

I’ve had 3 sessions of situated communication so far and I’ve got an insight into different ways you can communicate which has helped deepen my understanding of how to be approachable to a child. So far I definitely feel i have gained confidence within myself, making me more comfortable talking in front of groups of people and sharing ideas. Overtime i know my confidence will grow and i will become an effective communicator.

Blogging my experiences throughout this course is not only good for reflecting, but also will be interesting to look at in the future when i am nearing achieving this degree.