Today it was explained that music notation can be taught by any teacher without expert knowledge. We looked at how visualising notation in the form of shapes or even pictures can be a beginning place for learning how to read formal musical score. One way is to use shapes and pictures which are spoken in their syllables which represent how many sounds are being heard. For example, square is one syllable so one sound, cir cle is two so two sounds. A square and a circle are each one shape so the two sounds in circle equal the one sound of square. Learners can use this to make their own rhythms. For younger children pictures of familiar things could be used for example animals or mini beasts which we used to have a go at making our own rhythm on a rhythm grid. 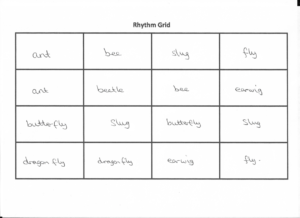 I was really interested to learn about Figure Notes. It was introduced in Scotland by Drake Music. Originally it was designed and used by two Finnish musicians as a way of helping children with learning disabilities to learn and enjoy music making, although it can be used with all learners. The idea is that you play what you see, and gradually new elements of music are added in reaching the point where they can use conventional notation. Matching stickers of notes on instruments can be used and the student can even see how long the notes they are to play by the length of the tail on the shape, the bars are always the same length. The coloured shapes are placed on a two-tier grid which later becomes the five stave lines. Progression takes place in three steps and I especially liked the idea that not only the teacher could see progression but so can the learners which would boost their determination and confidence. Another important point to make is that it is a differentiated resource some pupils can be using conventional notation where others are using Figure Notes which is important in any classroom where there are always different levels of ability. The important realisation for me is that all children can achieve and will want to continue learning.

Another way of teaching notation is using graphic score. There are many ways to communicate how you want the sounds played. You can use: 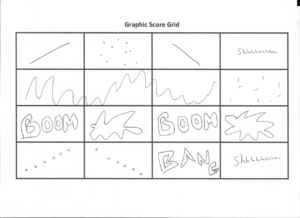 This week we had been asked to make a puppet for our workshop and I have to say this has been my favourite workshop so far. Using the puppets and studying how they can help children and young people explore different areas of learning was fascinating. I have very little drama experience and I have to say before studying the integrated art module It would have been my least favourite art form to go to. We were shown a video of how drama, in this case puppets, can be used to help children understand their lessons and help to make it more enjoyable to learn. The video took us to the Thomas Tallis school which is a very important school with regards to integrating art in learning. In this video we were shown how puppets were used to help a group of pupils learn a chemistry lesson they were struggling with. Many other methods had been used but the information still had not stuck and their understanding was minimal. The teacher took the subject area of reactions between metals and provided a concept of a common teenage dilemma of boyfriends and girlfriends, who is better looking, who is best with who and so on. The pupils made puppets and even a puppet theatre. Through doing this they were fully engaged in the creative process of putting it all together with making, scripts, and voices and at the same time learning about the metals and non-metals and how the reacted with each other or worked as girlfriend or boyfriend. The pupils were interacting well and giving each other confidence therefor, were happy and engaged. (Peck and Virkler 2006: 789) explain “Lauded as a classroom tool puppetry is a way for students to become engaged in a holistic creative process” By doing the lesson this way there was no abstract theory to break down and they could see the physical and visual representation of the information which made it much clearer and easier to retain. Another video we looked at was set in primary school and used the well-known story of “Where the Wild Things Go”. We then had a go at making our own puppet show with the puppets we had prepared. We were able to see between these two activities the creativity which was happening. I noted:

Using the puppets was a stimulus in the creative process bringing about the enhancement of learning skills such as:

Through taking part and watching these activities with the puppets I was also able to see the connections with the other arts. I have listed some examples I observed:

Using puppets as a drama strategy can be a very effective way of achieving drama level 2 experiences and outcomes an example might be:

EXA 2-14a I have created and presented scripted or improvised drama, beginning to take account of audience and atmosphere.

My integrated art inputs continue to inspire and give me confidence to use them in teaching. The availability of resources available which will include all learners and the possibilities in the support for our learners is far greater than I anticipated. As I said before, drama was a part of the arts I would not have ventured for fear of embarrassing myself with lack of knowledge. But what I have learned is that however little or vast my experience in any art form I can teach creatively through them in more ways than I realised.