Multimodel texts are a lot more engaging and interactive for the children, it can also increase the attention span the children have when receiving  certain information (Prandstatter, 2014). A piece of text done digitally is considered multimodel when it includes at least two of the five of the following semiotic systems-

‘The multimodality of technology is another reason to use it, as it allows teachers to present an idea in a variety of different ways to help pupils understand it’ (Beauchamp, 2012, pg.8).

Multimodality improves the understanding the children have for the certain text. Using technology within the piece of writing can help to increase the interest in what is being said but only if done properly which means that the teacher has to have skills necessary for it (Beauchamp, 2012). There has been a large increase of the use of multimodal texts and certain technology by children within the community, therefore, it is crucial that the skills used can continue to be develop to prepare for adulthood.

Reflecting on my own use of multimodal text, I think it’s a very beneficial feature to use especially with young children. When I was on placement I had to make a powerpoint for primary two’s for a lesson I had with them. They were learning about their senses and were on the topic of hearing. I was able to use text, pictures and sounds within my powerpoint and the children reacted really well to it, also they remained engaged throughout and were very keen on participation. It also let me connect the visual picture of the item to what sound they make and what it’s called and spelled, so,  it has the possibility to develop the children’s understanding of their surroundings.

Beauchamp, G. (2012) Ice in the Primary School: From Pedagogy to Practice. Pearson.

Today I explored more of the benefits of programmable toys within the classroom environment. They can have a really positive impact on the children. They have the possibility of improving sense of direction as the children have to distinguish from right, left, straight and back.  They can develop concentration and problem solving as well as improving their skill in writing down instructions. It can boost creativity as there are a lot of possibilities of art lesson plans with programmable toys (Janka, 2008).

“In the field of mathematical development, children should develop the ability to describe simple journey and instruct the programmable toy in order to develop positional language and estimation.” (Janka, 2008, p.2)

A programmable toy called ‘Bee-Bot’ is a widely used toy in the classroom. It involves setting down  specific directions for the toy bee to move in. Lydon (2008) states that in her classroom 12 out of 28 children were capable of using the Bee-Bot right after hearing instructions for it which she did not expect. It shows that the Bee-Bot increases independence and is straight forward to use for the children.

“[Floor robots in the classroom] help with the development of skills such as a logical sequencing, measuring, comparing lengths, space orientation, and expressing concepts in words.”  (National centre for Technology in Education, 2012, p.1)

It is shown that a simple toy can have a huge advantage for the children and is a widely used technology within the classrooms for children at all different stages.

We had the opportunity (in small groups) to create our own maps for the bee-bots to move on which could be used in the classroom. Our team took an approach to focus on shapes. We were able to connect what the shape looks like visually and their connection within the shapes we find in our day to day life to the properties and names of the shapes. We done this by separating the paper into 12 different section and in each one a different shape was drawn but as an object so for example a circle was drawn as a clock. We then made questions cards with different properties of shapes with they then had to identify and move the bee-bot to that specific area. From my own reflections of the task I think this is a much more fun and interesting way to teach children maths-it also really helps to develop problem solving skills as even as adults we had to think about the answers. 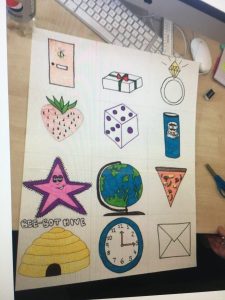 During this class I have further explored the meaning of digital technology. At the beginning of the period we looked into the module handbook and assignments so that we are aware of what it will involve. I was able to explore the meaning and definition of digital technology, throughout the session and I know its key objectives as stated by The Scottish Government (2016) are to improve the skills the teachers have, develop the possibility of a wider connection with the world, boost curriculum and assessment distribution and empower the leaders of change. The use of digital technology such as computers, tablets, games or programable toys are an interesting way to make education a lot more interactive and ‘makes learning more fun’ for the children but one of the possible problems that may appear, which personally I found quite unexpected, is that a lot of teachers don’t have the skills and knowledge about the items to be able to use in their classroom (The Scottish Government, 2016).

The Scottish Government (2016) Enhancing learning and teaching through the use of digital technology [online] Available from- : http://moodle.uws.ac.uk/pluginfile.php/391375/mod_resource/content/2/Digital%20Learning%20and%20Teaching%20Strategy%20.pdf [Accessed 9th January 2017]