In today’s class I learned about the use of mobile devices to enhance learning. After having a tutorial around mobile devices through digital literacy within my first trimester I found the use of Easi-Speak microphones beneficial and easy to use, therefore I was excited to spend time using them to create a poem and recording it.  At first I did some further reading from teaching times and found that “39 per cent of teachers stated that children should not have access out of school to mobile phones, while another 29 per cent of teachers said the ideal situation would be if all pupils had access to a mobile.Schools also believe that children’s preference for technology both at home and at school is evolving quickly, just as technology is continuing to change at a rapid pace” (Scottish Government 2016).

Majority of schools that were surveyed schools identify that home computers are used as a personal revision tool with 64% of schools providing directed homework by teachers that required access to computers at home. Only a quarter of schools believe that the majority of pupils use computers for entertainment and social networking exclusively and not for educational activities. (Scottish Government 2016).

I also read an article on the telegraph about how technology is reshaping teaching it stated that ” Over four in 10 households now have a tablet, meaning that children are becoming computer-literate before they’ve even started primary school – and we’ve all heard about the techno-babies who can handle an iPad before they have learnt how to tie their own shoelaces”.  I think this is relevant because my two year old niece is in nursery and she is able to use educational games on my IPad where there are a range of shapes with different size and colour and they have to be moved to the specific space where they would fit and she was able to move the shapes around the screen to the space they fit in. She also used the IPad to listen to the songs/nursery rhymes that she learns in nursery and is able to choose the song from the list allocated under the video she is watching. This shows that she is already using an IPad before she has learnt to get her self dressed and tie her lace.

We were to answer a question “Should mobile devices be used in the classroom?” To this I answered yes I think that mobile devices are effective because children can create their own short story or poem and be able to act as the main characters through use of devices such as IPad’s, laptops, Easi-speak Microphones and talking tins. These are both tools used to record speech. They have memory on them that can easily be transferred to computers. It also allows the children to record their CVC words such at CAT, MAT, DOG and FROG and then spell them. This may help the children learn because they are saying it out loud and then spelling it so that they can play it back to themselves. This will help children who do not take information in when writing it with pen and paper. It could also benefit children who have additional support needs and struggle with spelling of their words if they work in partners their partner could spell it out and the child is able to play it back.

Today we explored Talking Tin and Easi Speak microphones. We were to create and “I am…” poem using the Easi-Speak Microphone. We were given sentence starters and were asked to finish the sentence. To do this we were to work in pairs and created our poem. At first we wrote down the ending of the sentences so that we could then record it. Once it was recorded we were to use Microsoft Powerpoint to put each line of our poem on to a slide and then add a picture using an online resource called Pixabay.  We linked our ‘I am’ poem to a literacy and technology outcome within the Curriculum for Excellence. The technology one I thought that linked was “I can explore and experiment with digital technologies and can use what I learn to support and enhance my learning in different contexts. TCH 1-01a” (Education Scotland 2014). I thought this linked because the use of Easi speak microphones is a different technology from recording through a laptop or Ipad. It also includes progression of other subjects for children’s learning through the use of technology. The literacy one I thought that linked was “I enjoy exploring and playing with the patterns and sounds of language, and can use what I learn. LIT 0-01a / LIT 0-11a /LIT 0-20a” (Education Scotland 2004).  I thought that this was useful because the poem uses sounds of language to become a rhyme and being able to play around with words to make it rhyme with the next. 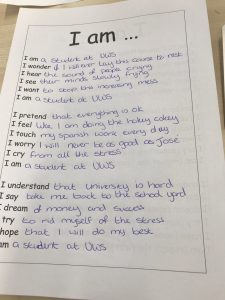 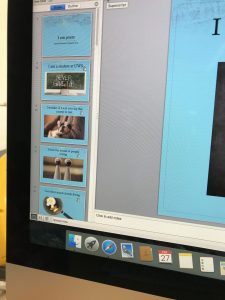 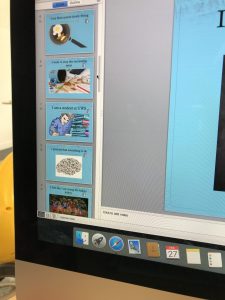 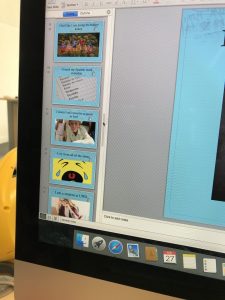 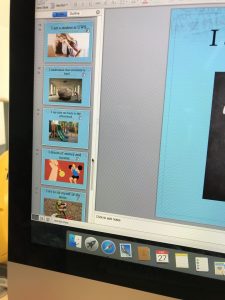 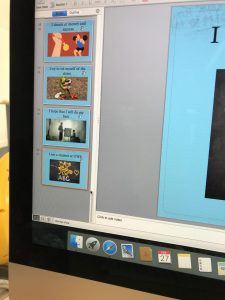 I found this as a learner easy to get my head around and straight forward. I enjoyed taking part in the task. As a teacher I think because the use of mobile devices such as Easi-speak microphones are straightforward and easy to use children would be able to understand it and learn a lot from it. I think that children would be keen to get involved and enjoy the use of it as a tool for learning. It is also beneficial for teachers because it is easy to transfer onto a computer/memory stick so that they have evidence of child’s progression and it isn’t all pen to paper work.

We then explored Talking Tins, talking tins are the similar to easi-speak microphones it is another tool used for recording items. With this we recorded a short paragraph of our poem. I didn’t find this as useful as the easi-speak microphones when we recorded a line it seemed to cut out although there could have been a short memory fault within the talking tin. Although it can be a beneficial tool for children to record CVC words within a literacy lesson or the times tables within a maths lesson to help the children learn effectively.

I think that the use of mobile devices is effective within the classroom as it influences children to learn in a range of ways. It allows teaching to become flexible and interactive. It allows children with additional support needs to progress in ways that they may not always achieve through pen and paper. It encourages children to be comfortable within themselves when hearing their own voice so that they do not feel uncomfortable when hearing it.

As adults my partner and I both hated our own voices and through use of a range of technology I have become more confident with putting my own voice into lesson plans/projects that I have created throughout my digital technology sessions.