More than 160 children took part in a STEM workshop, shared displays of their own class learning and spoke to local employers about local STEM careers.

The event for Primary 5 pupils was organised by the RAiSE (Raising Aspirations in Science Education) programme which is funded and delivered by The Wood Foundation, Education Scotland, Scottish Government and participating local authorities. RAiSE increases the confidence, skills and networks of teachers in STEM education to motive and inspire learners.

RAiSE was supported in the development and delivery of the event by Lochaber Geopark and DYW West Highland.

“The Lochaber STEM Fair provides a wonderful opportunity for young people, teachers and the local community to come together and inspire, excite and learn from one another about how STEM impacts the region.”

“The highlight of the day was hearing the young people talk so enthusiastically about their displays during the showcase. Motivating learners at a young age and providing the platforms to engage them meaningfully 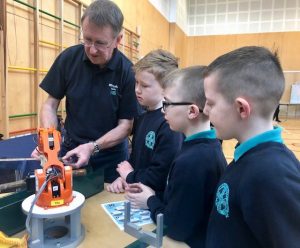 in STEM is vitally important for creating the workforce the region needs for the future.”

Caol Primary School’s project showcasing computer games using digital technology platform MakeyMakey was named the winner of the showcase and the children were presented with a trophy. The judges were impressed by the children’s problem-solving and creativity skills.

Highland Wood Energy paid for transport for the pupils to attend and catering costs were met by DYW West Highland.