11th February marks the first International Day of Women and Girls in Science and will be commemorated at UN Headquarters in New York.

In December 2015, the United Nations Member States adopted a resolution to establish an annual International Day to recognize the critical role women and girls play in science and technology. The achievements of women in all areas of science have been consistently overlooked compared to the achievements of their male counterparts. This situation is a serious obstacle to achieving gender equality and female empowerment. 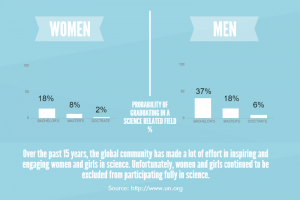 The International Day of Women and Girls in Science, held under the theme – ‘Transforming the World: Parity for All’ – will help institutions to promote the work of women in science and encourage girls to enter the sciences as a lifetime profession. Girls need female role models to emulate and who will give them the belief that they too can become scientists.

Parity means equality, and it is one of the purposes of this International Day to ensure that parity becomes reality.  This means institutions must ensure that women and men are paid equally for the same work. Gender equality has always been a core issue for the United Nations and the empowerment of women and girls will make a crucial contribution to the 2030 Agenda for Sustainable Development.

Follow the event on social media using the hashtag #dayofwomeninscience