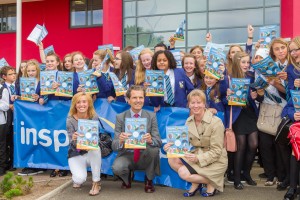 On Monday 19th August, pupils at Grove Academy in Dundee were involved in a launch event with a difference. Not only were they joined Shona Robison MSP and local hero Liz McColgan to launch Character Scotland’s exciting new ‘Inspire>Aspire: Global Citizens in the Making’ programme – they also launched their own inspirations and aspirations in the form of over 220 helium balloons which took to the skies above Broughty Ferry.

Character Scotland is an emerging and rapidly expanding charity that aims to support the development of children and young people’s character and values. The charity’s vision is for all children and young people to develop as responsible, caring, ethical and engaged global citizens: people who aim to HELP OTHERS, GET INVOLVED, DO THE RIGHT THING and DO THEIR BEST.

Liz McColgan, former Commonwealth and Olympic athlete, said “the project allows pupils to believe in themselves. It doesn’t matter what people think or say about you, if you really believe in something you want to achieve you have to be dedicated to putting the time and effort into doing it. This project allows children to search at what they are good at”.

To find out more or get involved with the progamme please go to the Global Citizens in the Making section within Game On Scotland.