We are back after to Easter holidays, starting the “summer” term; although right now we have  “Sneachd na h-uain bheaga” which is typical for us here. The April showers in Lewis seem to be more often or not, “the snow of the wee lambs”!

Firstly, as it is term 4, we have started swimming again on Thursday afternoons.  This means travelling to Stornoway by mini bus and then back again, just in time to go home on the school buses.  Because of this, we have both an early break time in the morning and an early lunch to enable us to leave the school at 1 o’ clock.  Despite these minor disruptions to the school day, the children seem to be enjoying their lessons, and there are one or two sleepy children on the way home!

Secondly, even though we are just back to school, we have the May holiday weekend coming up, so we will be off on Friday 29th April AND Monday 2nd May.  We hope you enjoy the long weekend, and that the weather warms up for May, which has been until recently, always thought of as one of the loveliest months in the Western Isles, but remember the old Scotttish saying “ne’er cast a clout, ’til May is oot”.  In other words, don’t take your coat off until after May!  Incidentally, as a bit of long forgotten folklore, it is thought the “May” in the said saying isn’t the actual month, but refers to  the shrub hawthorn, which is also known as “May Thorn” and when it flowers!

Here we are in February and carrying on with daily school life!  In the past few months we have had some school closures due to the dreadful weather but otherwise school goes on as ever, bustling and busy.  Christmas was as usual, hectic, but we managed to put on yet another show with dancing elves and even the odd rock ‘n roll polar bear.

Various sports activities for the older ones have taken place, including Sportshall athletics and more recently Tchoukeball festival and visits from Jenna Stewart to us are always welcomed by the pupils!

A daily event is the “Daily Mile” where all the children walk, jog or run a mile every day. One the occasion of extremely bad weather, the Wii is used and instead of 15 minutes of fame, we have 15 minutes of Just Dance, which I can personally vouch make the “older” element of the school have “jelly” legs and arms by the end of it!  We continue to have healthy snacks, fruit and toast, and every lunchtime the children are exceptional in their consumption of the salad provided.

After lunch, the toothbrushing regime continues with visits from the Childsmile people who are very impressed at how diligent the children are.

All in all, I think that we must be a very healthy school.

Next up is the forthcoming Mod, this year in March, but more on that next time. 😉 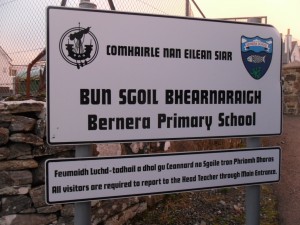 Lately, there has been a sighting of pirates in Bernera School! 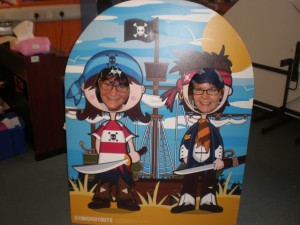 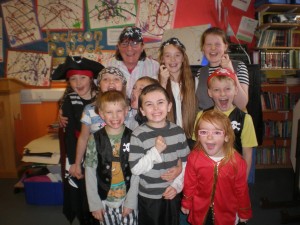 It was Pirates Day in Bernera School recently, all the children (as well as Vicky and Meg!) dressed as pirates and had a special “Pirates Lunch” and wrote poems or drew pictures.

Well, Bernera School has started its new year, and indeed are heading towards the end of the first term of 2015 – 16!

As always, it has been very busy, with a new Sgoil Araich pupil, new P1’s, classes moving up to the next levels, staff changes and all the different activities such as a storytelling session and a Sgoil Araich trip to the Iron Age house at Bosta as well as the school projects and lessons!

We are rapidly approaching the October holidays and thereafter, the inevitable lead up to ….Christmas preparations!

Time to get all this terms work finished off in the next week and a bit, and then we can look forward to our autumn break!

Bernera Primary 6 and 7 pupils joined forces with Uig P6s and 7s to make up team Bernuig, playing together in a Tchoukball Festival at the Sports Centre on Tuesady 24th February.

Tchoukball?  For anyone who hasn’t heard of it, Tchoukball is a fast, indoor, non-contact team game using a soft ball and a mixture of handball and volleyball skills.  Our P6s and 7s have really enjoyed the Tchoukball ‘taster’ sessions they’ve had with Active Schools Co-ordinator Jenna Stewart and Uig and Breasclete pupils in recent months and this was their first opportunity to take part in an organised event with teams from other schools.

Around 24 teams from various Lewis schools took part, and so great was the interest that the organisers  had to schedule a second morning of play on Tuesday 3rd March.  Our pupils all agreed that it was really good fun and they would love to do it again with MORE games!  As ever, their behaviour both on and off the floor, was impeccable and they were complimented by the organisers as displaying the best teamwork skills out of all the teams taking part.  Well done Bernuig!

The children have been visiting to local polytunnels this session, learning about growing vetetables and planting various things of their own.  There was a slight hiatus in proceedings, however, when the first polytunnel was destroyed in the January gale.  Undeterred, they have been back for a visit to the greenhouse and will be planting up some seeds in the school.

As a project it is valuable on many levels. Scientifically, the biological aspects of growth, chemical compositions and so forth; and of course from the health and wellbeing aspect it ties in to see food being produced.  As a part of learning in the community, working with members of the community and getting out and about fits in perfectly with the concepts of oudoor learning that is seen to be so valuable.  All in all, this is a very good example of true cross curricular learning.

On the 22nd January Bernera School went to Tesco’s!  A important part of Curriculum for Excellence is Health & Wellbeing, and the “Farm to Fork” project investigates where our food comes from, how it is proccessed, displayed and sold in the  supermarket and from there to our forks!  The children and staff travelled to Stornoway in Dodo’s minibus and arrived at Tesco to meet another “Big” Sarah, who showed us to the changing area and staffroom in order to hand out clipboards, talk about what we would see and most importantly, hand out very official looking tabards and paper hats to show we meant business!

First on the agenda was a look at the fruit and vegetable department, identifying various items, checking them on our boards; then on to the fish counter, identifying different fish and handling a herring (with gloves, thankfully).  Next, the bakery department, where after a thorough  handwashing and hat checking, we got to sugar doughnuts and ice some Danish pastries! We got some to take home too. After a visit to the warehouse, the freezers and the delivery van, we returned to the canteen for a super snack of all sorts of different fruits, including mango and pomegranate, french bread, Scotch eggs and juice.  Time to head home.  Thanks Tesco for an interesting, informative not to mention tasty, morning out! 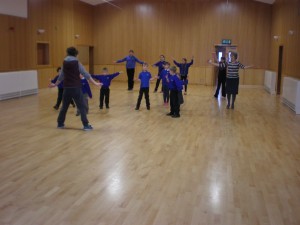 After a busy winter term with a multitude of activities, staffing changes ands some very adverse weather; we are here in January 2015!  We have had a couple of closed days due to the weather, but all in all, we are now back “into the swing” of the new term and the new year.  The children have started the Dance Project mentioned in the School newsletter ” FIOS NA SGOILE” and seem to be enjoying it!  Julia Mcghee from An Lanntair, who is running the dance project, is taking the children in the Community Centre and working with them on movement on the theme of the sea.  They will be taking part in this for 5 weeks.

After spending a month of the Summer holidays in Burkina Faso with her family on a short term missionary project, the children were delighted to hear our Nursery Key Worker Anneline share some of her stories and show us some of the things she had brought back from Africa at Assembly.

Anneline was given a very special African outfit as a gift on her return to Lewis, which she wore to Assembly today. We thought she looked very cool in it.

Today (Thursday 26th September) PC John Alex Murray is visiting the school with Jenna Stewart our Active Schools Co-ordinator to test the P6/7 children for their Bikeability 2 Awards. It’s a lovely day for it and we are wondering how they will get on?