Leswalt Primary pupils have taken some time this week to learn about, reflect on and pay their respects for Remembrance Day.

P1-4 learnt about why people wear poppy to remember – and indeed what they are remembering. They also created beautiful poppy pictures which they took along to the War Memorial.

P5-7 recapped on what they knew about Remembrance Day and took their learning further by finding out about the history of the poppy; who initiated this, when was Remembrance Day first held and what money raised by Poppy Scotland is used to support. They had designed and produced ‘In Flanders Fields’ pictures with Mrs Copeland and added to these with some of the information learnt.

Along with Kirkcolm Primary pupils, the school headed up to Kirkcolm’s War Memorial for 11am to observe the silence and take a moment to think. Oliver (P7 Kirkcolm) and Breagh (P7 Leswalt) read a poem to us all and we took a look at the many names inscribed and thought about the bravery of those involved and sadness felt by their friends and families.

So COP26 is taking place just 2hours up the road from us and Glasgow is on the centre-stage for this high profile Climate Change conference. Leswalt Primary pupils have been keeping up-to-date with the latest from COP 26 in school this week. They talked about how their recent Learning for Sustainability work, and the plans of the Eco-Committee, links to the subjects being discussed by world leaders and eco campaigners this week  at COP 26. But, as one P5 rightly pointed out, it is actually an area in which we can , and should, all be involved in trying to do our bit!

Mrs McKnight signed us all up to be part of the Old Vic staging of The Lorax – a Dr Seuss story which highlights the need to look after our planet. We were super lucky to be one of the schools who were able to access this live! It was a fabulous and thought-provoking production which the pupils really enjoyed.

Pupils then put their technology and eco knowledge into action by working in groups to plan and produce short iMovies with the title ‘A Minute of Us’. The remit of this task was to work as a team to offer an insight into what eco work we are doing as a school, what our beautiful area means to us and what action we can all take to help in this worldwide campaign. The children loved putting their videos together! I hope you enjoy the children’s work – they certainly made us smile! Can you spot any budding TV presenters in there….?!

Ms Surtees and Mr Campbell are keen to encourage schools throughout the region to become Eco Schools just like ours.  They have heard of the North Rhins Partnership’s good work in this area and wanted the opportunity to talk to our children as to how we have made being Eco schools so successful.  They hope to use our example as a model to promote others to participate in this very important award scheme.  It couldn’t be  more timely with COP26 very much on everyone’s agenda.

The children had a wealth of ideas and suggestions to share.  The councillors praised everyone for their passion and enthusiasm, saying what an inspiration and credit they are to us all. Olivia presented a PowerPoint message that she had created in her own time.  This was filled with strategies and tips we can all take onboard at home to help protect the planet. Aiden gave the message of the day when asked what he would say to schools that think they are too busy for Eco Schools, he replied, “You are never too busy for the world!”

Here are our responsible citizens engaged in purposeful discussion. 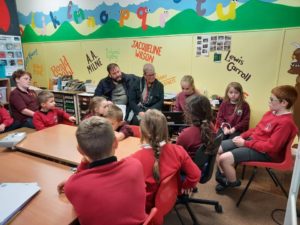 Have a look at Olivia’s presentation for yourselves here:

They really are our own ENVIRONMENT CHAMPIONS! 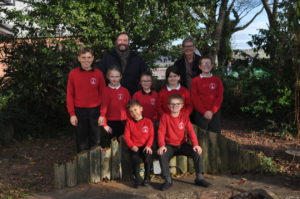 Scary faces all round at Leswalt Primary today! Where had our pupils gone? They had been replaced by all manners of witches, monsters and creatures that go BOO in the night!

The House Captains of Leswalt and Kirkcolm Primary (Breagh, Malcolm and Miley) had organised a super afternoon of Halloween fun for their classmates! From a Halloween parade to apple dooking, wrap the mummy game to musical statues – the children all had a fangtastic time!

Thanks Breagh, Malcolm and Miley for all of your hard work (and Ms Whorlow for ‘behind the scenes’ preparation!)

Do you recognise any faces from the photos below…?!

We are delighted to announce that the North Rhins Partnership of Leswalt, Kirkcolm and Portpatrick Primary schools have been awarded national recognition in Education Scotland’s annual Learning for Sustainability awards.

Having been shortlisted, we achieved a Highly Commended accolade within the Sustainability Learning Community Award category. This is an outstanding achievement, having competed against early learning, childcare, and school settings across the whole of Scotland.

The awards recognise the commitment, professionalism and leadership that underpins Scotland’s success in innovating for Learning for Sustainability within educational settings.  Within Scotland’s curriculum, Learning for Sustainability (LfS) is recognised as an entitlement for all learners and a recent international study showed that our learners are world-leading global citizens.  The award is timely with the upcoming COP26 summit taking place in Glasgow in November.

The aim is to help us all recognise the amazing achievements of Scotland’s people and the settings, schools and communities that have demonstrated passion and commitment to building a socially-just, sustainable and equitable world.

The North Rhins Partnership was required to demonstrate our whole school/partnership approach that encourages individual and collective action to promote Learning for Sustainability.  This incorporated many factors such as supporting Global Goals, the UNCRC Rights of the Child, Rights Respecting Schools, Eco Schools and our strong pupil voice,; both within our school settings and as part of contributing to our wider community.  We are doing our bit to develop independent learners, effective contributors, confident individual and responsible citizens for the future!

The official results will be announced in the Daily Record within the next week.

Today the boys and girls of Leswalt primary gathered to wish a very special man and janitor a very happy retirement.

Dougie and his wife Denise were invited in for some memories, gifts and songs.

The boys and girls had all written their special memories of Mr Brawls in a scrapbook.  We all watched a video montage to remind Mr Brawls of the fun times he had with us at school.  Aidan and Faye brought in some “special juice” for him to enjoy.  Mark and Rachael brought a big cake for all to enjoy, from Simpsons the bakers. A well known Proclaimers and Abba song was re-written specially for our guest of honour.

Everyone had generously donated money – the Parent Council, parents and staff. This money was combined to get specially commissioned garden chair and table made for him – built out of whisky barrels.  This was made by “Wee dram barrel creations” and was engraved with his name and a message from us all at school.

The afternoon finished with all enjoying a wee pice of cake and having some banter with Mr Brawls.

We all would like to wish him a long, happy and healthy retirement.

He has been a star!

Click on the links below to see our tributes

For Maths Week Scotland 2021, P1 – 4 got busy applying their numeracy and maths skills. As well as participating in our Fun Maths Roadshow, the children created portraits using only number shapes.  We are sure you will agree their portraits would grace any art gallery. 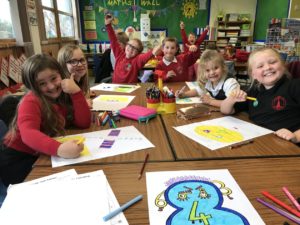 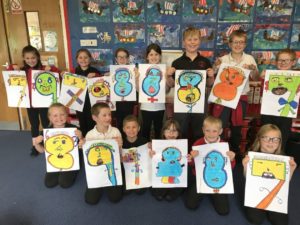 Day 4 of Maths Week Scotland and today we had fun completing LOADS of maths challenges at the visiting Maths Roadshow!

We worked in pairs and moved round lots of activities – completing them and marking them off on our record sheet as we worked our way around the room. There was a huge variety of tasks on offer: angles to multiplication, tangrams to magic squares, data handling to number bonds. All set to make us really think! We LOVED the challenges set.

Many thanks to the D&G STEM Team for visiting us and delivering a maths-tastic morning!

Today’s maths was active, fun and tasty! What more could you ask for?

In small groups, we used a recipe for flapjacks to produce a delicious filling snack whilst using our ratio, weighing, time and fraction skills.

Anne-Marie in the kitchen kindly popped our baking in the school oven and, in the afternoon, we cracked on with creating our box to package up our yummy treats.

Mrs F had prepared a 2D net of a cuboid – large enough to hold two pieces of flapjack. Squared paper was available to anyone who was up for drawing their own 2D net – Alexander was up for this challenge! We then cut these out, scored along the folds and assembled our cuboid boxes.

As an extra challenge, Mrs F told us about the costs of the ingredients used. We calculated how many individual pieces of flapjack we had baked, the basic cost of ingredients and what we could perhaps charge if we were looking to make these to sell. We needed to think about the profit margin as well as cost of supplies needed – businesses must make sure they aren’t pricing items too cheaply or too expensive! The ingredients cost £7.98 and we made 52 slices which works out 15p a flapjack to make. We think we could sell these for a bit more than that though! This is how a business makes a profit; by considering how much a customer will pay for a product whilst ensuring your costs are being met.

Loads of maths skills being exercised today – plus we had a bite to eat!

P5-7 used their maths learning in context today when they popped outside of their portacabin to put their angles and measuring knowledge into action!

First up, the class watched and chatted about a STEM Ambassador’s video clip which talked about ways in which maths is used in the workplace – today’s clip concerned the Renewable Energy job market.

Mrs F had organised some photographs of examples of angles in the environment for pupils, in their Talk Partners, to locate and measure using their protractors. So we all headed out to complete the Angles Hunt. Using the protractor correctly can be a challenge but we’re doing lots of practising!

Following this, the class got together to recap some angles vocabulary (acute, obtuse, straight, reflex, degrees, perpendicular lines) and then individually each had angles to identify and measure as appropriate to their age and stage. Some were investigating angles in a triangle, some angles within a right angle, straight angle or round a point and some working out the supplement or complement of an angle.

As an aside, we also used rather retro looking trundle wheel and checked its measurements against a metre stick. It was pretty accurate!

All good fun and a different way of taking our learning forward.

Next up – Wednesday’s fun  will involve weight calculations, ratio, time, fractions and the net of a cuboid to do a spot of  baking and then to package up the finished product!