Leswalt Primary recently had their whole school sports day.  It was very well attended by family and friends of all the pupils.  Following all the events, the adults enjoyed some teas,coffees and homebaking while the pupils cooled down with an ice cream.  The winning house and sports champions will be announced at the end of term service on Tuesday 2nd July.

The Primary 1 pupils at Leswalt Primary have recently been learning all about money as part of their Maths learning and teaching.  To consolidate and reinforce the real life applications of money the pupils have been out and about spending their pennies.

The boys and girls first went to Leswalt stores and spent money in the shop, using a shopping list provided by staff.  Mrs Gillian Murdoch, owner of Leswalt Stores, let the pupils scan the items into the till themselves.  They then later used their knowledge of how Leswalt store operates to set up their own tuck shop for older pupils, with the assistance of Mrs Smith.  This shop was open for business every playtime at school and sold a variety of crisps, sweeties and fruit.

Primary 1 and Mrs Smith went on the bus into Stranraer.  They had to count up the money to pay for their own ticket.  Once in Stranraer the children went to “Sweet treats” sweet shop to spend some money before walking down to Agnew Park.  While at the Park they enjoyed a play in the sunshine and also paid for an ice cream to help cool them down.  After an enjoyable morning, the children then bought a return ticket on the bus and travelled back to school.

It was a fantastic learning experience for the young pupils and allowed them to learn more about money and use it themselves in a variety of real –life situations. 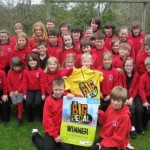 In the P5 girls race Merryn Walker was first, Rhona Baillie was second and Freya Bathgate was third.

In the p5  boys race Finlay Keenan was 2nd.

And in P7, Cameron Walker won the boys race.

Leswalt was also 3rd in the inter-school relay race. Well done to all of our runners!

On Monday the 18th of March 2013, the pupils of Leswalt Primary School jumped on a James King bus and the first question was; “I wonder what it will be like at the museum?”

They were going to the Burns Birthplace Museum because their topic was Scotland and they had learned wonderful Scottish poems in January.

As all 37 pupils arrived at the museum, they split into two groups.  They were primary 5-7 and primary 1-4.  The 5 to 7 group headed off down Poets’ Lane, which was a long path which took you to the museum.

At the museum they went to the Whispering Gallery, that was where they saw Robert Burns’s actual writing desk (where he wrote most of his poems).  They moved into the next room where there were interactive games and sounds to do with Robert Burns.

From there they moved onto the gift shop with lots of different items to buy.  After the gift shop we walked to the Burns Monument and it was huge.  They went up it in groups of 6.  It was very steep, from the top they could see the Brig ‘O’ Doon

They headed off to the ‘Auld Kirk’ (that was where Tam ‘O’ Shanter shouted “weel done cutty sark!”).  It was all in ruins.

They walked to the Education Pavilion to eat their lunch.  After a while they went into a room where they tried on costumes and headed out to Robert Burns’s cottage.  There were four different rooms, they were; the kitchen /living-room / dining room / bedroom, the Spence, the byre and the barn.  The kitchen was one of their favourite rooms because they could not believe that seven people had to sleep in one tiny bed.

While in the education pavilion the Primary 1-4 class were learning about how times have changed since Robert Burns was alive.  The younger pupils even made some butter, using different utensils.  Mrs Baillie had to taste all of the different butters blindfolded, to see which one she thought was the best!

All of the children enjoyed the trip, especially the cottage.  They learned more about the tale of Tam ‘O’ Shanter.

The boys and girls at Leswalt Primary had a fun day on Friday 15th March when they all arrived at school in their pyjamas to help raise money for Comic Relief.

As well as paying for the privilege of wearing their nightwear to school the pupils also had the “Great Leswalt Bake off” and sold off delicious home baking.  And, all week the school had been selling the official red noses to pupils.

Primary1-4 had been working very hard on their enterprise business this term.  “Smarty Pants” was the company formed by Mrs Wither and the younger class.  They created and sold fridge magnets, book marks and ornaments, with a Scottish theme.   After calculating their costs the pupils are donating all profits to Comic Relief.

Primary 5-7 designed and sold their Scottish quiz sheets – with the eventual winners being the Anderson family.

In the afternoon of 15th March the whole school came together with parents and family to watch “Leswalt’s got talent”.  Pupils signed up to audition for Mrs Baillie and the finalists performed in front of the judging panel which consisted of Harold Mc Cracken, Nina Agnew, Claire Agnew and Mrs Mc Knight.   There was a wide variety of talent on display from saxophone and piano playing to singing, dancing and cheerleading. After all 12 acts had performed the judges had the difficult job of selecting the winners. Millie and Ethan Smith did a wonderfully choreographed dance routine together, and were rewarded for their efforts with chocolate Easter eggs.

After all the fun the boys and girls of Leswalt raised £250 for Comic relief.

Laura Mc Clymont (Active Schools co-ordinator) recently organised a tri-golf festival for all Primary schools in the local area.  Each school had to send 2 pupils to take part in a variety of golf related challenges.
This festival was supported and led by James Erskine PGA professional golfer.  The eventual winners were named as Abbie Mc Quillan and Craig Anderson from Leswalt Primary.  They worked well through all of the activities and ended up with the most points on the day.
The whole of Leswalt Primary school will now receive one full day of golf tuition with James Erskine, as their prize for their classmates doing so well. 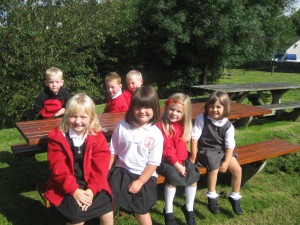 pupils into our school this session.  They are a wonderful group of children and have all quickly settled into life at school

Leswalt Primary School has entered the Rhins Primary School netball league and played their first games on Monday 9th May 2011.
The team comprised of pupils from p4-p7 .  In their first evening playing competitively the young team gelled well and demonstrated a great sporting attitude.
The final scores resulted in Leswalt Primary winning against Belmont A and Sandhead, they drew against Rephad and lost against Belmont B, 2:1

The whole school recently enjoyed the sunshine at Logan Gardens, in conclusion to their “James and the Giant peach”/Minibeasts topic.  Pupils were actively involved in creating little “Bug Hotels”, using resources in and around the grounds.