P4-7 headed outside this morning to put our angles, shape, measure and area skills to good use.

Remembering what we had learnt in the classroom, we got busy spotting 2D shapes in the environment, measuring the perimeter and area of squares and rectangles (everything from bricks in the wall to the gate!) and identifying and drawing angles. We had a chat about why these skills really are important and when we might need to use them. Even better, the sun was trying hard to shine. What a nice way to start a busy week…

P4-7 enjoyed a cultural afternoon at the Ryan Centre courtesy of a group of musicians called Trio Ecossaise. The three ladies entertained the packed theatre with various pieces of music on the piano, cello and clarinet. They told the children about their instruments and invited them to talk about how the different pieces of music made them feel using emojis. They rounded the afternoon off with one we all knew – the theme tune to Star Wars!

Thanks to Joshua and Luke’s mum for accompanying us. 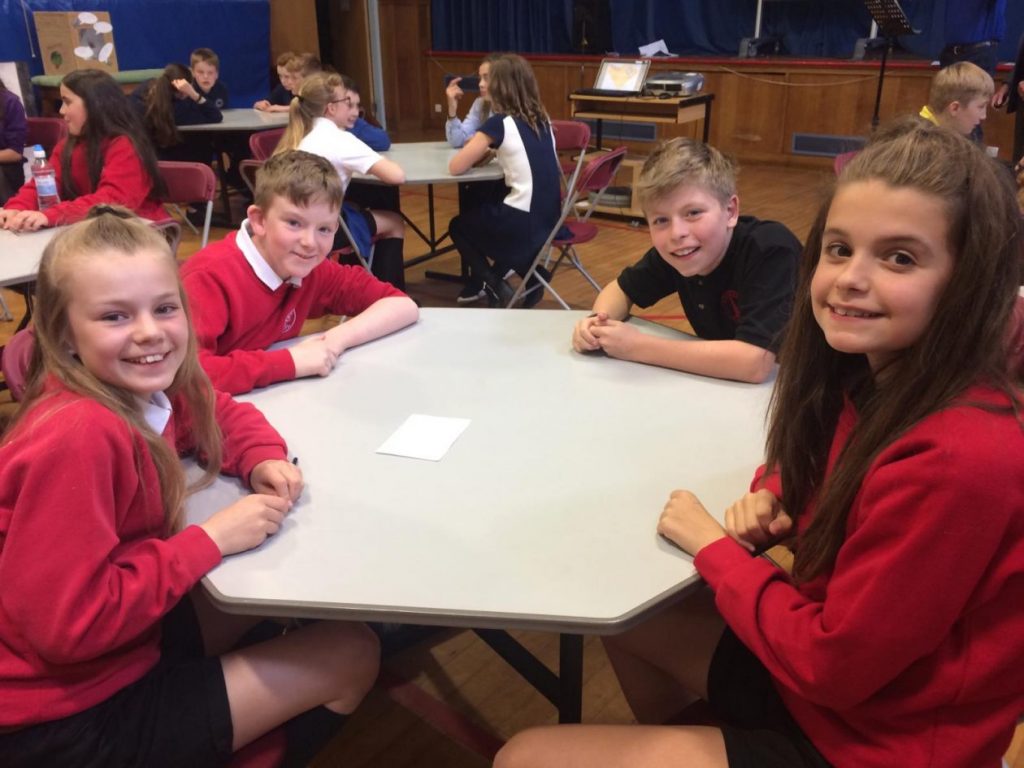 Huge thanks to our talented Rotary Quiz Team of Eva, Logan, Charlotte and Euan for representing Leswalt Primary so well at the recent local Primary Schools Rotary Quiz.

The four of them worked really well together and were fabulous school representatives answering some rather tricky questions. The team was chosen after a P7 general knowledge quiz was held in class when they demonstrated their super quiz skills.

Eggheads of the future perhaps?

Pupils were treated to a visit by 4 gentlemen on Thursday afternoon from the local Stranraer rowing club, who brought along a skiff for the boys and girls to see. Pupils were surprised to learn that the men had built the boat and that only glue had been used to assemble the wooden planks – there wasn’t a single nail in sight!
They were given the opportunity to sit in the skiff and ‘row’ the boat. Isla, Carys and Cara took it in turns to take on the role of the coxswain, trying to keep everyone rowing in time. Afterwards, they all learned about safety when rowing and the importance of life jackets.
Finally, the men explained that the SkiffieWorlds 2019 competition is being held in Stranraer from 7th-13th July and that competitors from all over the world, including Australia, New Zealand and US, are expected to attend. There will be fun for all the family, with various events on throughout the week. Have a look at the leaflet that pupils brought home or online for further information.

The boys and girls of Leswalt Primary, together with Mrs McKnight, Mrs Ferguson and Joshua and Kaiden’s mum and dad (with little Aria-Rose in the buggy!), did their bit for their community this morning by heading out in the drizzle with their litter pickers to spruce up the streets of their village.

Well done everyone. What responsible citizens you are!

Big thank you to Natasha, Ross and Aria-Rose for joining us!

Well done to all the boys and girls of Leswalt Primary for their superb hard work in putting on another fantastic show!

The story told of a lonely dragon hiding high in the mountains above the Alpine village of Stumbledorf, the hilarious villagers who were a little frightened of this creature, Old Ma and her hero son Tommy who came to save the day and Gilda the Goatherd who made friends with the dragon and encouraged others to do the same. By the end of the show, the villagers and the dragon were great friends with everyone agreeing to ‘Not Judge a Book by its Cover’- the message of the final song.

Super songs helped to tell the show’s story; a mixture of cheery tunes, rock n’ roll Tommy, a melancholy ballad from the lonely dragon, a frantically upbeat reminder about social media’s effects and a touch of yodelling too! The children’s fabulous singing (as always!) and acting combined to make ‘Dragon Days’ a feast for the audience’s eyes.

Huge thank you to Audrey Buchanan from Stranraer Drama Club for her help with costumes- they really helped to bring the characters to life!