The Hate U Give was a captivating and inspiring book, it gave you insight to what happens to the black community after the killing of Khalil. The main character Starr shares her thoughts and feelings about the events that occur with the readers throughout the book. The readers also see how Starr has to act differently to fit into her mostly white prep school. The Hate U Give showed that racism is still around, and the cycle that people have to through in the hood, is not getting stopped. The Hate U Give talks about police violence towards. I enjoyed reading THUG because it made me feel the emotions that the characters in the book felt, it created a picture in my head and made me wonder how I would react if I saw someone I loved die and had to prove that they did not deserve to be killed. Overall it is an amazing book and I would highly recommend reading it. 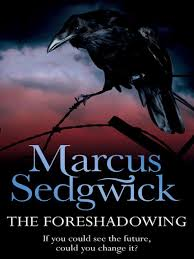 The Foreshadowing is a really interesting book based during the war. We get an insight of the main character, Alexandra’s life. Her oldest brother goes out to fight in the war and her dad is trying to persuade her other brother to do the same but instead he wants to move and study medicine. Her dad is not happy with the decision and there are a lot of arguments at home. Alexandra wants to become a nurse but her dad again is against it, later though she gets the chance to help at her dad’s hospital and witnesses the horrific injuries and health issues that the war had caused the soldiers. After some time she is not allowed back in the hospital and is not happy. Alexandra also gets tutored and from her teacher she got a book of myths that is also very relevant later on in the story. Alexandra runs away from home and pretends to be a nurse in a different country which was very wrong and could have caused her death. She later meets this guy and they both try to find her brother to save him from the war. The most important part of this book though is that Alexandra can sort of predict the future only in her case she could only predict when someone was going to die. This is an extremely good book, it’s interesting and you can’t get your eyes off the pages. I would rate this book 5 stars.

A time for pupils to read, wonder, discuss and share ideas about books.