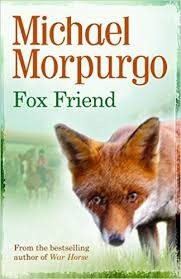 “Fox Friend” by Michael Morpurgo
In my group’s Literature Circle we have recently finished reading the novel, “Fox Friend” by Michael Morpurgo.
I liked this book because it was quite interesting to read. It was sad because a bit of the fox’s ear was torn a bit and he was covered in blood.
The story is about a little girl who found this poor fox in her back garden one night. She wants to look after the fox, but her dad hates foxes, so she has to keep this a secret.
The novel has a really sad ending, but I don’t want to give anything away as you should read it for yourself…
You’ll definitely enjoy it!

“The Greatest” by Alan Gibson

“The Greatest” is a book about a young boy called Mohammed Ali.  He started to go to boxing in his early years of life.  When he got older, he started to be very competitive against other people and began winning championships in boxing. When he was younger, he got picked on by someone called Chris.  Later in their careers, they meet each other and fight each other for the championship!

I enjoyed reading the book as it was very interesting and it was about the life of Mohammed Ali, a boxing legend!

“The Greatest” by Alan Gibbons

In our Literature Circle group we read, “The Greatest” by Alan Gibbons. Here’s what the members of my group thought of it:
Adam: “I like the book. It was about boxing and it was good all the way through.”
Tiegan: “I liked that book because it was fun, interesting and engaging”
Ayaan:“I liked reading about the life of Mohammad Ali.”
Kieran: “The book was nice to read and I liked reading it and listening to other people read it aloud.”
Donna: “The book was good and nice to read and listen to. It was full of information about Ali’s life and what made him become a professional boxer.”
We hope that you take time to read it as it was one of our class’ favourites!
Tiegan Scott 2J1

A time for pupils to read, wonder, discuss and share ideas about books.