Transient art – works of art made from objects around the home or garden.

Transient art is to be enjoyed for a short time. We have these photos so we can enjoy enjoy the art for a bit longer. 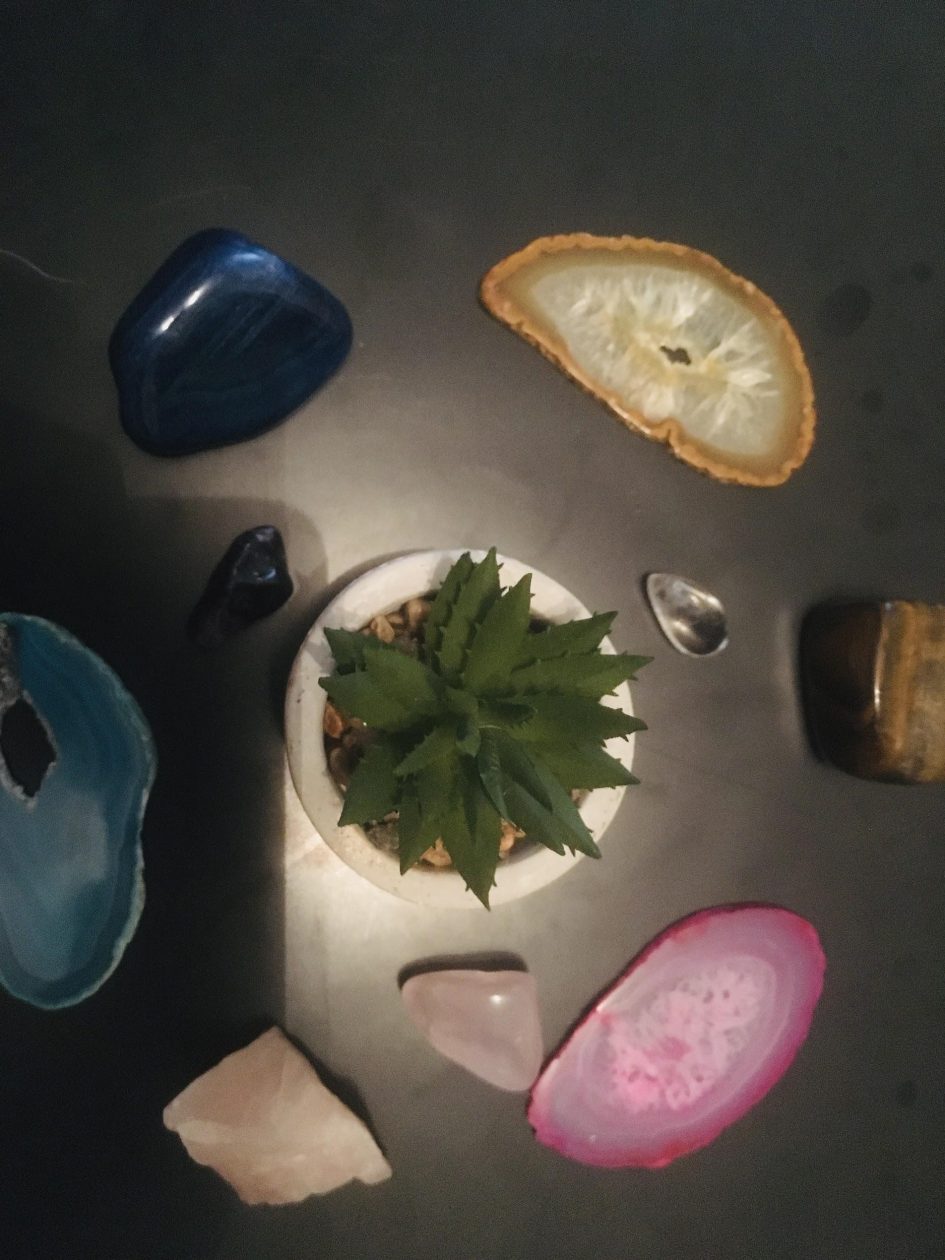 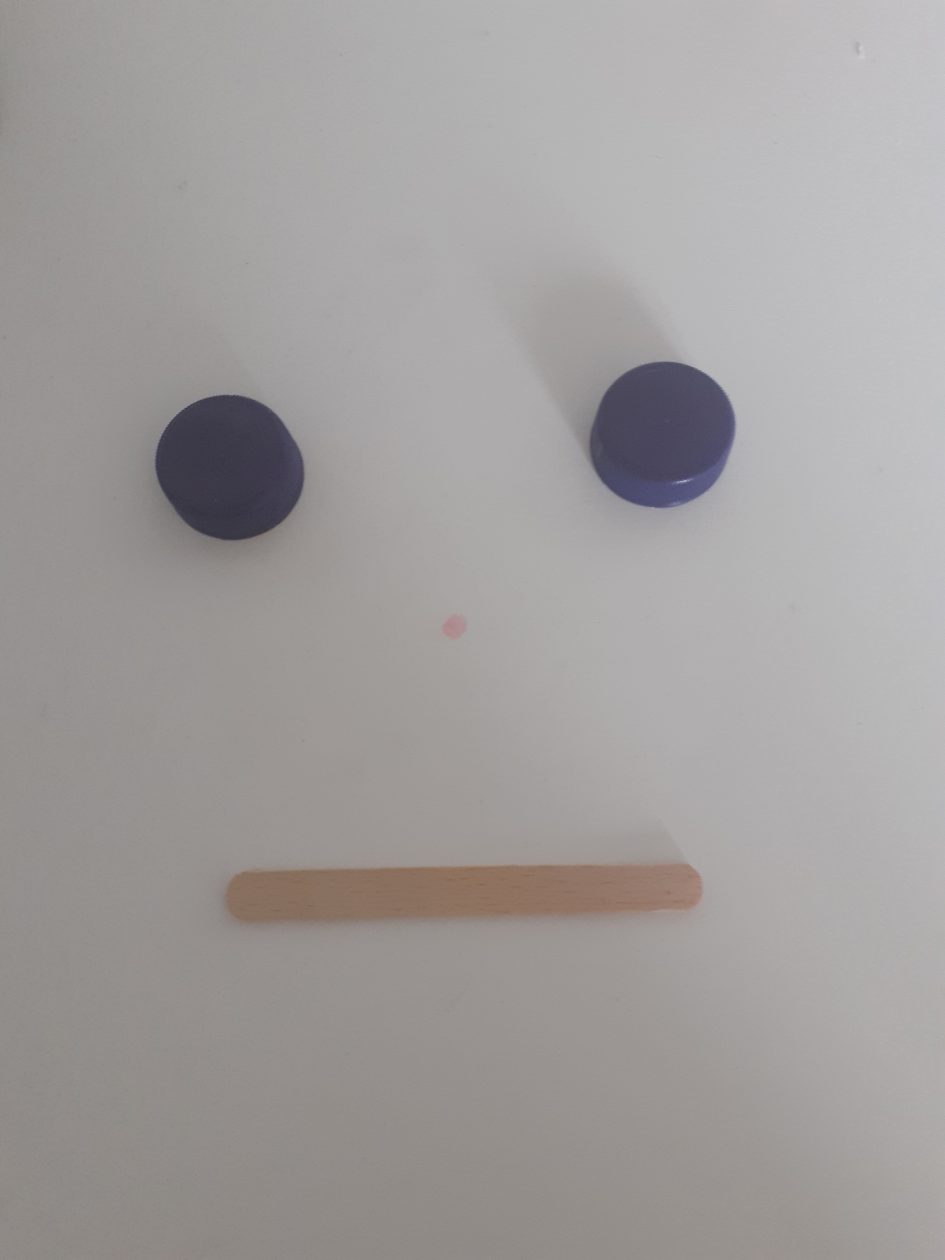 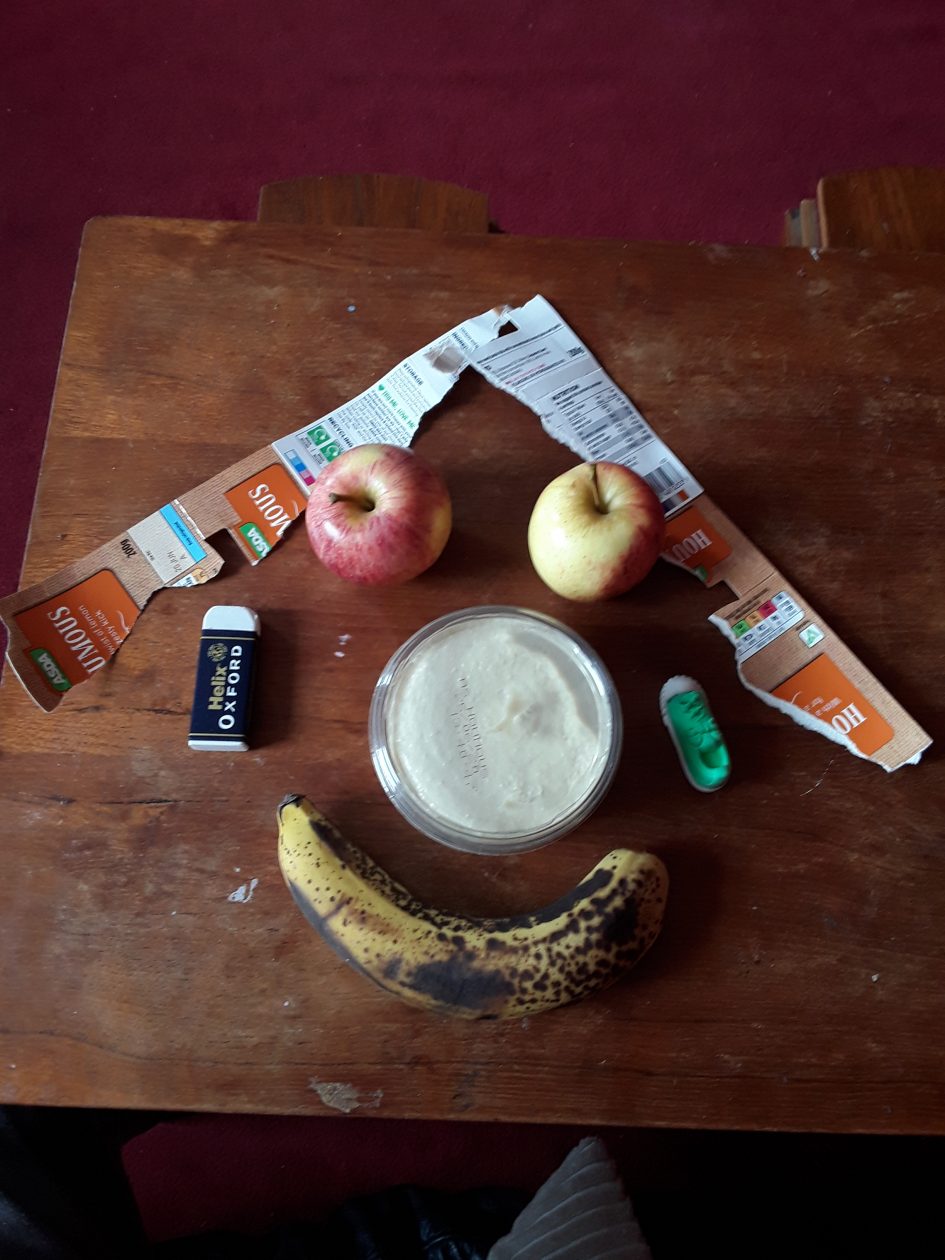 P7 have been writing realistic fiction, thinking ahead to the first day of secondary school.

Here are some more of our stories about secondary school.

Jaden went to bed that night dreaming of the adventures that would take place the next morning it would be his first day at secondary school .

Jaden woke up early in the morning and got ready for school he hurried to the breakfast table and ate happily he was very worried about being the new peoples for the day ahead.

Soon as Jaden was getting closer to the school he was so nervous he was getting goosebumps on his whole body but when he got even closer he seen is best friend Tobi. Tobi was very scared too so Tobi and Jaden stood beside each other just waiting for the bell to ring. But Tobi knew some more people so Jaden and Tobi was waiting for the bell. Then the bell rang so all the people was running to their class all of them pushing and shoving Jaden and Tobi out of the way so because all the people were making Tobi and Jaden out the way Jaden was late for is class. So he went to the head teachers office and told the head teacher why he was late. So Jaden walked to is class he entered his classroom. He did a thing were you tell something about yourself so people know who you are and what to like.

Then it was break time but Jaden was to scared too talk to anyone so he just sat down in a corner because he was too scared to even stand up.

After school Jaden walk out the door with like 300 people and he ran home with all his strength to see his family and to get something to eat.

Jeff  went to bed that night dreaming of the adventures that would take place the next morning .It would be his first day at secondary school.

Jeff woke up early in the morning and got ready for school. He hurried to the breakfast table and ate happily. He was very excited for the day ahead.

When he was walking to school he saw his friend so they walked together and laughed and joked with each other Jeff felt happy and he was ready for s1 with a huge smile.

When he was in school he was a bit lost because he didn’t expect it to be that big  so now was a little bit scared but he found his way to his class and said hello to his friend and now he was in his class he felt better they did register then they moved on to a different class he was now doing  math and he was about to move on to pe.

At lunch time he bought a burger and then sat with his friends then they went to play football with the s2 pupils.

On the way back from school he asked his friends if they wanted to play ps4 later they said yes so he ran home and told his mum how school went and then played ps4 with his friends. 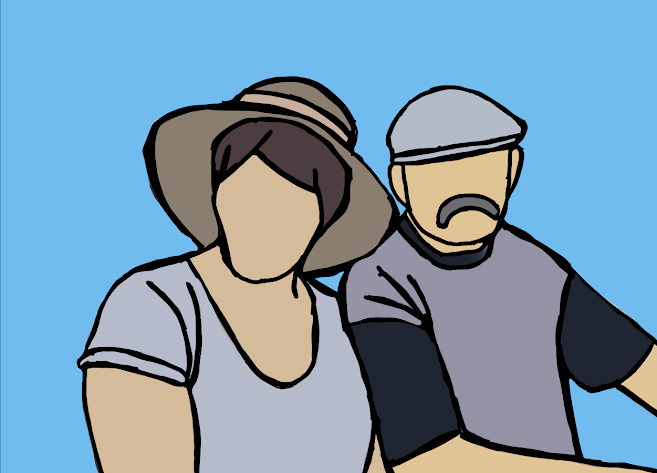 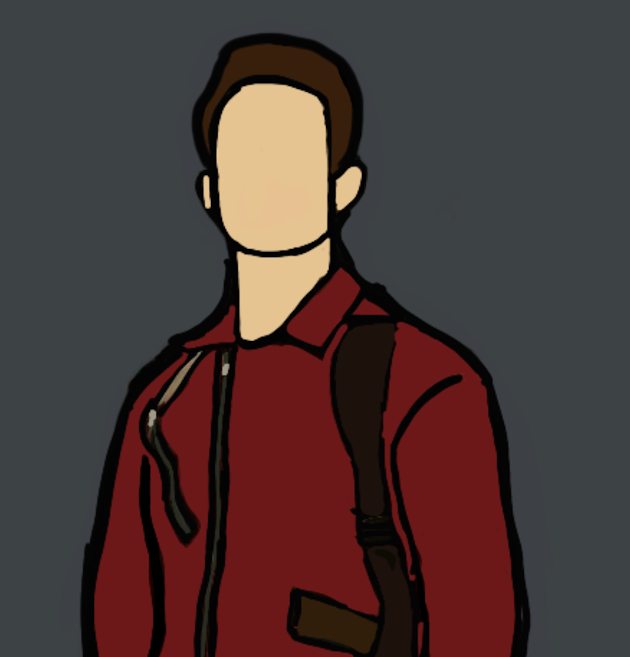 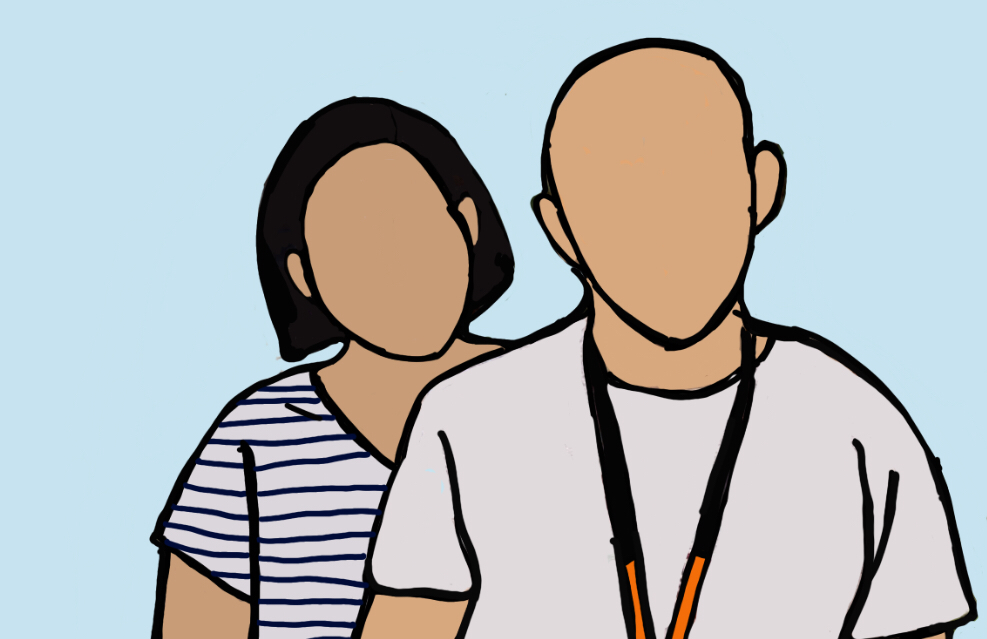 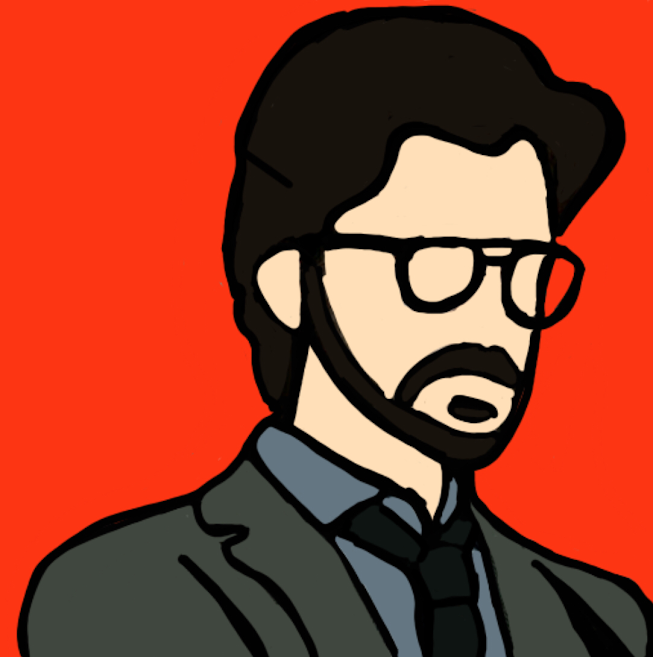 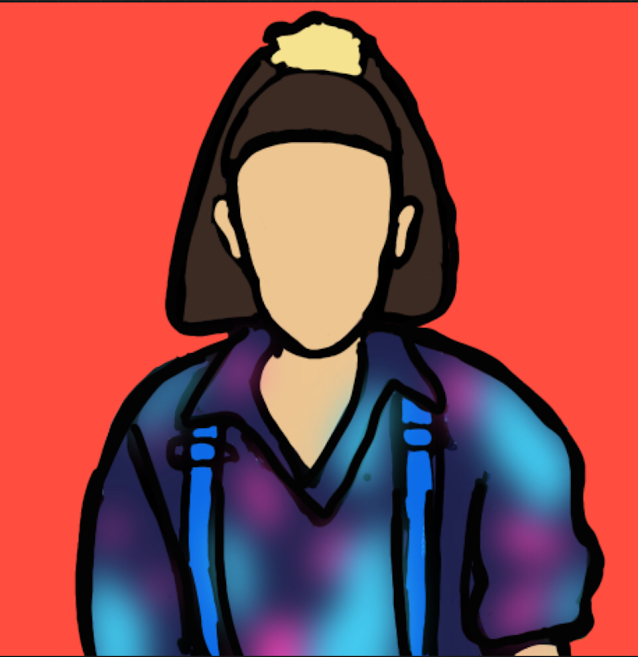 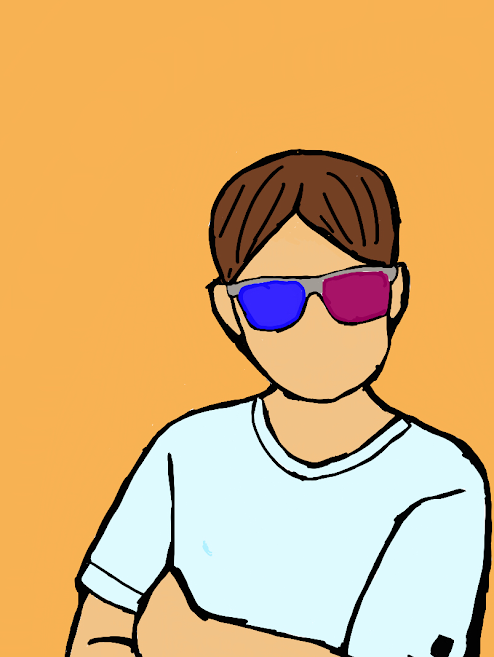 Kalina has been working on her art at home. She shared some of her favourite pieces of work with us.

P7 have been writing realistic fiction, thinking ahead to the first day of secondary school.

We hope you enjoy reading some of our stories.

Marilyn went to bed that night dreaming of the adventures that would take place the next morning. It would be her first day at secondary school. Marilyn woke up early in the morning and got ready for school. she hurried to the breakfast table and ate happily. She was very excited yet scared for the day ahead. After her breakfast hurried to put her shoes on and rushed to the door. Marilyn shouted “goodbye” to her mum and dad and ran to school.

On the way to school, she had lots of mood swings and honestly didn’t know how she felt. As she got closer and closer to her new school, more people appeared and she felt a rush of excitement. In the distance she could see a tall white building with a huge badge that said “Oakwood secondary school.”, at that moment, she knew that this was not a dream, this was real life.

As she got closer, she saw lots of people entering the school and as she was about to walk through the gates, a short blonde girl came to  walk next to her. “Hi, I’m Zoey, are you new to this school too?”. “Yeah, I’m new and I’m quite nervous. I’m Marilyn by the way.” They continued walking as they walked towards the entrance. A tall man with a beard greeted them at the door. “Hello everyone, I am Mr Roberson, I will be your new head teacher. He assigned all of the new students someone to guide them around the school. “Hey, I’m Melinda, I’ll be showing you around this school. Don’t get bored, there’s really nothing much to see.”

There were hundreds of people watching as she walked through the corridors. Melinda showed her to her first class of the day, it was math. As she walked in, Marilyn saw Zoey sitting at a desk and as she looked up from it, she pointed to the desk next to hers. Marilyn said goodbye to Melinda and walked over to her new desk. The whole class was chattering until they heard someone say: “Hello everyone, I am Mrs Cooper and I will be your math teacher.” After an hour, Zoey pointed to the clock saying “Math is almost over, phew”. Just then, the bell rang and they all silently cheered.

Melinda was waiting at the door for Marilyn and they walked to room 21. Marilyn said it was the next subject, Science. As Marilyn walked in, the teacher was already in and was staring at her saying “you’re late!”, Melinda whispered to her saying “always be at least five minutes early to his class.” She walked in sighing, found a seat and sat. “As I was saying before you interrupted, I am Mr Chippings. I am your science teacher.” For an hour they had to sit in silence and if anyone even whispered then he would shout “shut up!”, yeah, he wasn’t a nice teacher. After yet again another hour of science and shouting, it was time for lunch.

It seemed like heaven when they got outside. There was a burger king next to Oakwood school so Marilyn and Zoey went there. Of course, the ice cream machine was broken. They went on social media to catch up when Marilyn  had the idea to skip the next class and hide in the bathrooms, Zoey thought it was an amazing plan so when lunch was over they walked inside and ran to the bathroom, laughing. They were in there for an hour, taking selfies and playing games. Then the bell rang so they walked outside and went to their next class. Melinda was so confused but Marilyn said that Zoey showed her around, she bought it.

They had one more class, English, it wasn’t enjoyable but they made it through by looking at each other and laughing. At the end of the day, Marilyn asked Zoey if she wanted to go over to her house and Zoey agreed. They went to Marilyn’s house and played with her Golden Retriever. Then they both went out for pizza and had an amazing time.

‘Smiling Buildings’ in the style of artist James Rizzi. 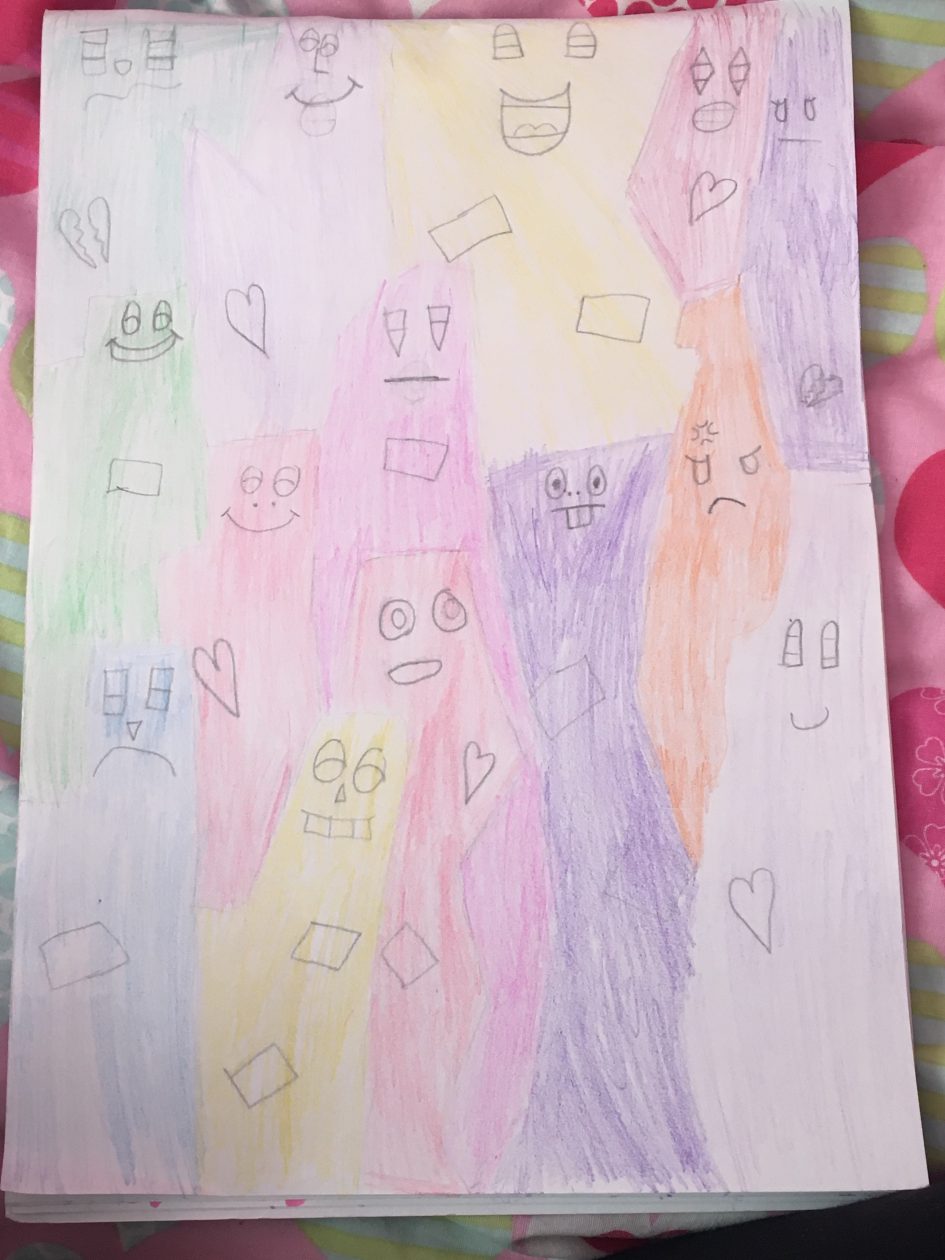 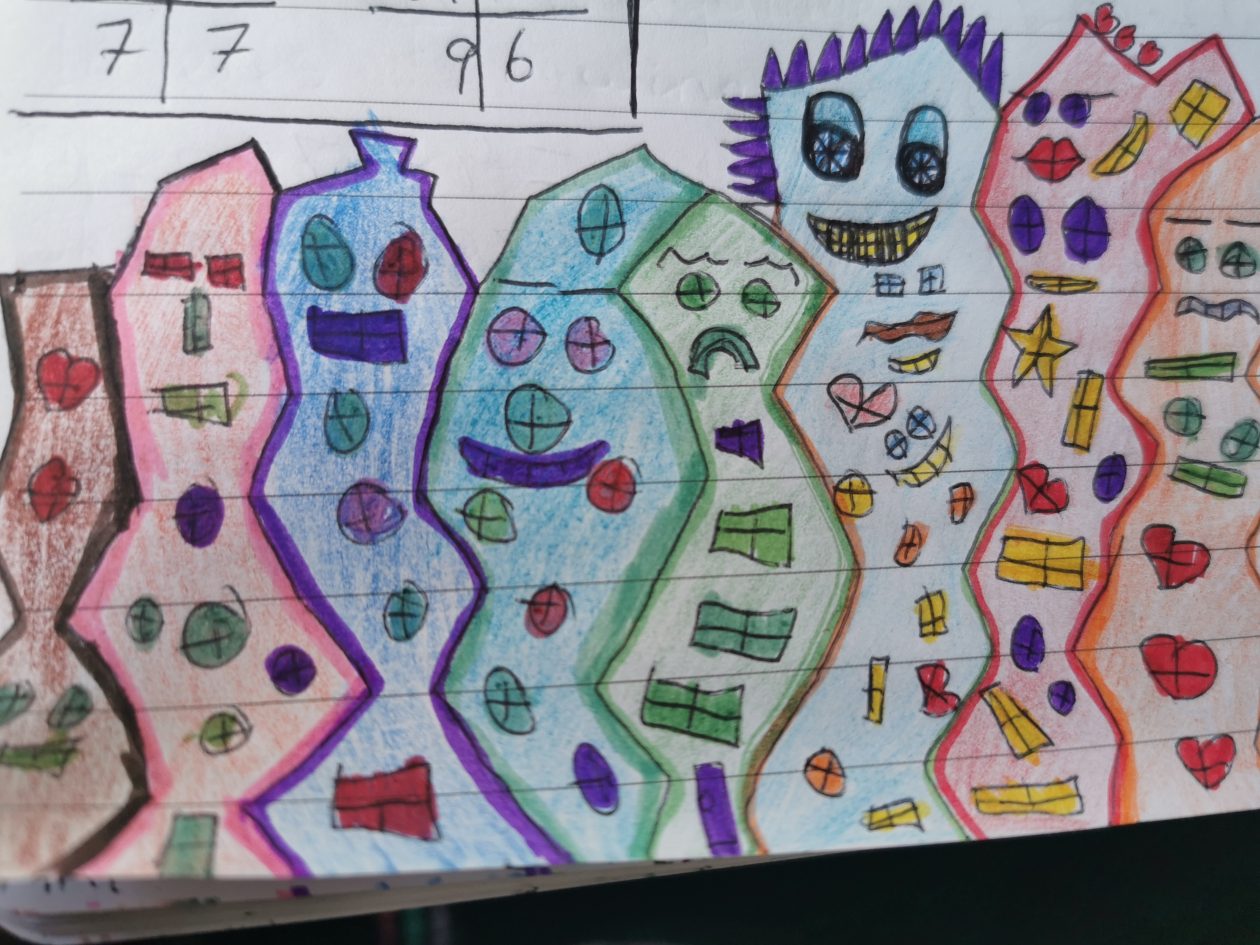 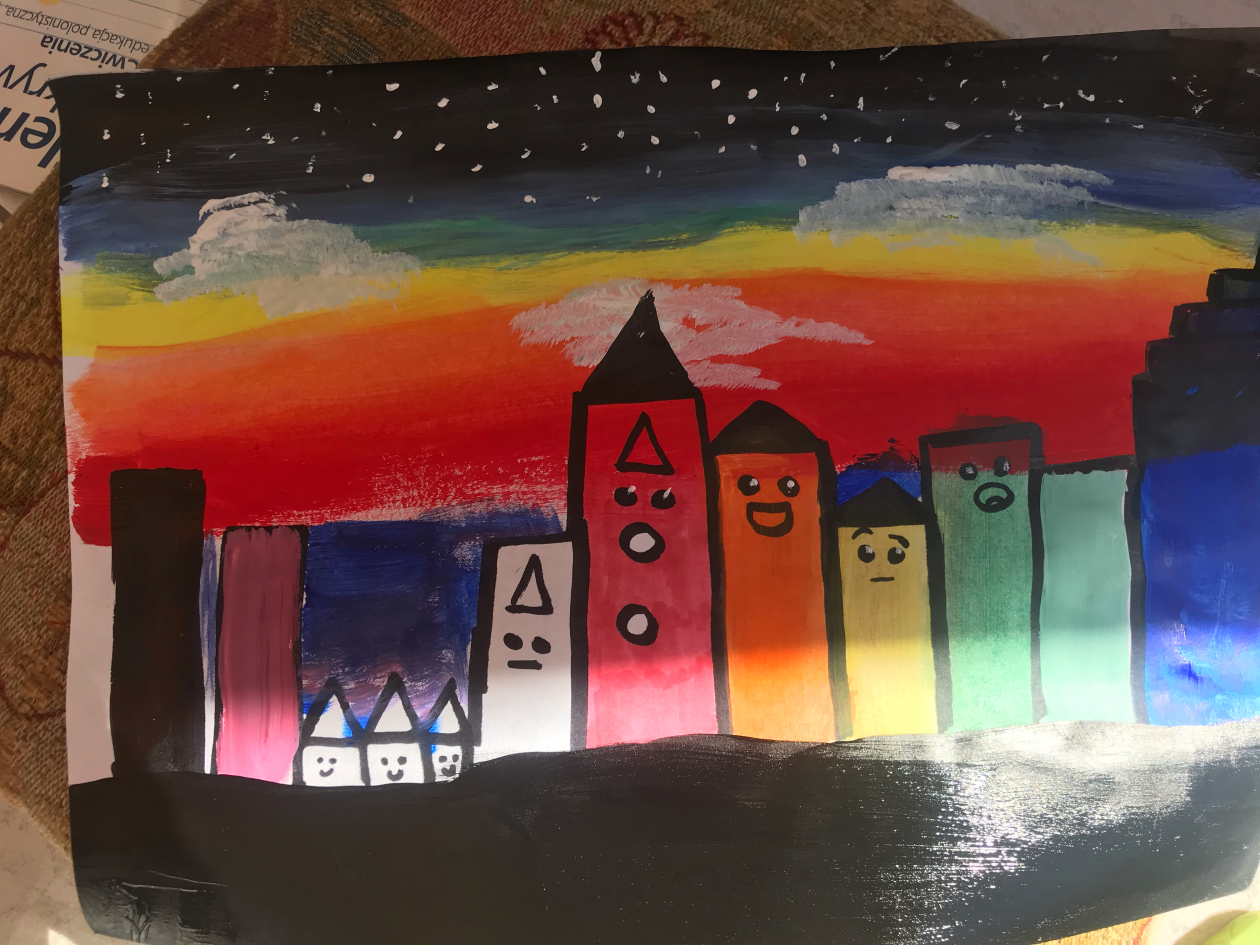 Some photos of P7’s baking. 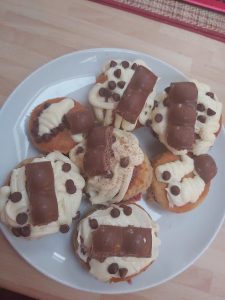 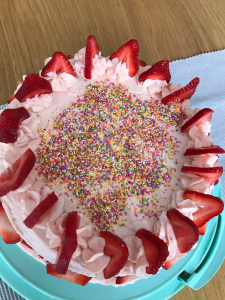 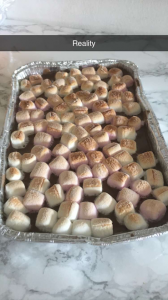 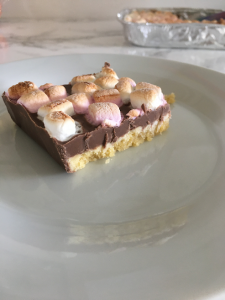 A recipe to try as well, shared by one of our pupils:

I just made THE BEST a chocolate cake here’s the recipe!!

Method
First whisk the eggs and the sugar together for 15 minutes at top speed until it’s nice and fluffy when it is whisking preheat the oven at 170celsius then mix the flour and coco powder together when the eggs and sugar are probably beaten add the cold water and whist for 5 minutes at lowest speed then sift the flour and coco power into the eggs and sugar and gentility mix put it in the oven for 45 minutes then chill for 15-30 minutes then decorate with whipped cream (not butter cream because the cake is very light) and maybe some fruit
AND ENJOY!!

Positive messages to everyone, from the P7s. 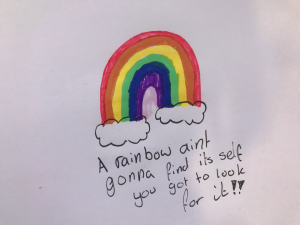 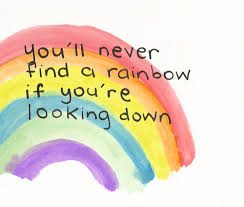 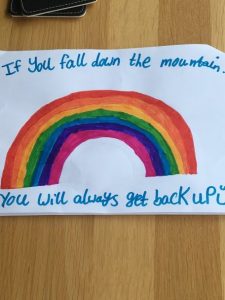 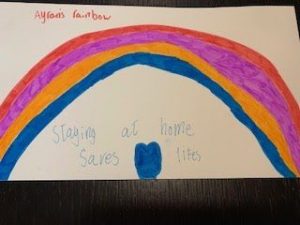 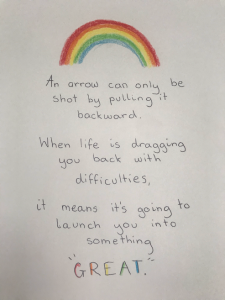 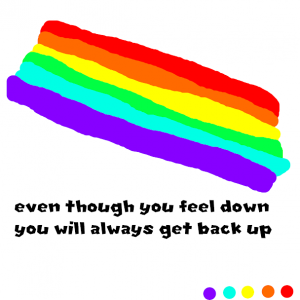 Good morning. Welcome back! I hope you are all well. I hope you have had a good Easter break and you have had time to relax and enjoy yourselves.
Term 4 begins online today. As before, learning activities will be posted daily on Google Classroom. I am happy to be able to continue my work with you here on Google Classroom. Please keep up the good work.

Attendance / Self Registration
You should access Google Classroom at some point every day (Monday – Friday). A register will be taken each day to check we are safe and are taking part in some online learning. I will use the ‘Daily Check In Register’ form each day to check attendance. Please mark yourself as present every day on the Google Form. 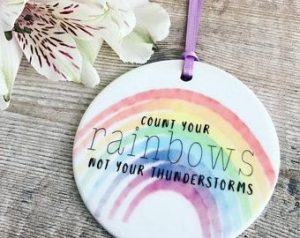 Good morning. Hope you are all well.
As today is the end of term 3, we hope the children have a good Easter break.
Some learning activities for today are posted on Google Classroom.

Social, emotional health and wellbeing
• Morning check in – what are you looking forward to doing at home in the holidays?

Art
• Design a poster with a positive message for your class mates about the Easter holidays, with an Easter theme.

Audio books
* Audio books are available for pupils to listen to throughout the Easter break:
https://stories.audible.com/start-listen

Good morning.
Hope you are all well.
Suggested home learning activities for today:

Social, emotional health and wellbeing
• Morning check in – what chores have you been doing to help at home?