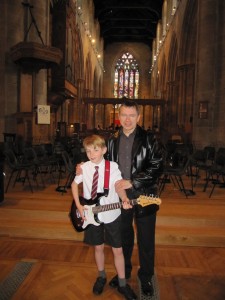 Garry Simpson, primary 5, (pictured with Mr Baillie, music instructor) performed at the Perth Festival of the Arts on 21st May.

Garry played 3 pieces, Enough Said, Carrick Fergus and Let There Be Rock. He had fun on the day and was congratulated for a super guitar performance.

He was second last on and after he finished Mr Young, Perth and Kinross’ Music Coordinator  said, “Well if anyone thought that Portmoak Primary was a quiet country school, in a sleepy village – they can think again after hearing Garry Simpson ! ” 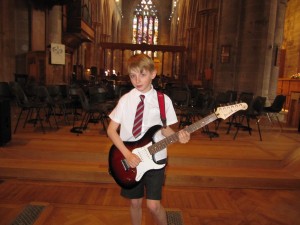 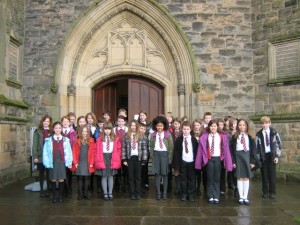 Portmoak had competitors in the single and group instrumental competition for Perform in Perth. Garry Simpson was best in class for Modern Guitar Solo, Transitional (Advanced). Sam Law, Sylvie McKenzie, Eve Robertson and Thomas Gray achieved a merit certificate for their strings ensemble. Well done to all of our talented musicians.

Portmoak’s choir were also competing at Perform in Perth the following week. They were beaten by just one point to the trophy for School Choir of 2012 (catergory for schools between 100 and 500 pupils). They sang ‘Come to the Fair’ and ‘The Dormouse’s Carol’ with strong vocals, clear words and a warm tone. Their submission was commended and achieved a ‘First Class’ certificate. All 29 pupils in the choir were an absolute credit to the school. 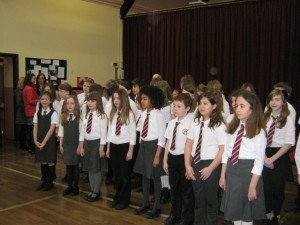 Portmoak’s school choir attended Levenglen Nursing Home in December 2011 to entertain the residents with some festive tunes. They were a credit to our school. 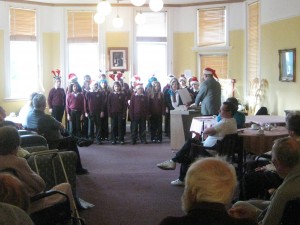 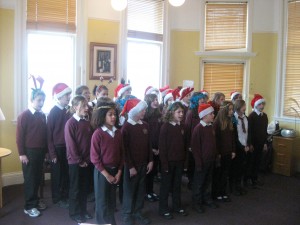 In March 2012 the choir are entering Perform in Perth, which is an annual  music festival where we will be competing in the county school choir heats. Miss Kettles will be accompanying the children on the day and we are meeting Mr Young there. The choir will need to be very smart in their uniform with a shirt and tie if possible. 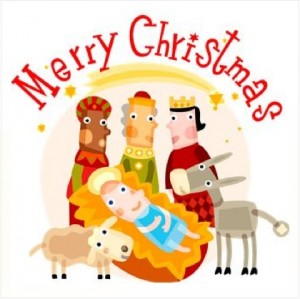 We are pleased to announce that we will once again be producing a Nativity performance for parents and friends in December.

Although Primary 1-3 are the main stars of the Nativity, pupils from every year group will be supporting the infants with the singing.

Feedback from parents last year suggested that everyone would like to be invited to see the Nativity, so in order to accommodate all parents and friends we will be having two shows.

We do hope that you can join us for one of the shows and let us help you get into the Christmas spirit!