Our S5/6 Modern Studies pupils got a brilliant virtual tour of the UK Parliament this week. They learned about the House of Commons and House of Lords; exploring their roles, how they get to be there and how laws are made between the two. The session also covered how to get involved and make your voice heard in Parliament. This was done so whilst walking virtually around the Palace where it all happens!

As well as this, the pupils had a Q&A session with MP Marion Fellows. Thank you Marion Fellows for answering the questions asked by pupils. This was a really useful session! 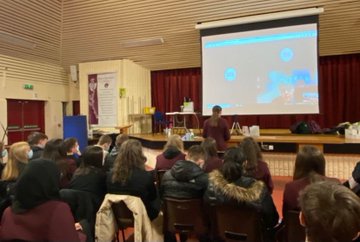 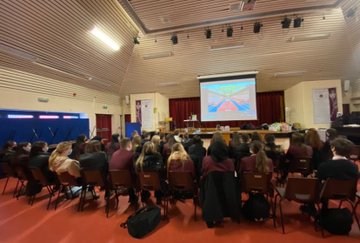 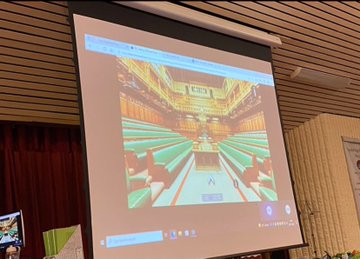 Here in Taylor High School, we have a candidate running to be a Member of teh Scottish Youth Parliament for the Motherwell and Wishaw constituency – Malaikah Ahmed of S4. See below the reasons below that Malaikah believes she is a good candidate:

If elected, one of my first campaigns would be to address racism within our community, as this is something, I am very passionate about. I am currently learning a range of languages to help break down any barriers that I may come across. I am a good listener, I’m enthusiastic and I will always represent the people to the best of my ability. I am also very reliable and would treat my position as MSYP with respect and give it 100%.

To vote go to: Welcome to the polling station for the Scottish Youth Parliament 2021 – Young Scot e-Voting and type in your Young Scot National Entitlement Card number to browse all of the candidates and cast your vote!

Voting for the Scottish Youth Parliament opens today. To vote in these elections, bring your YoungScot card to school this week. Voting will close on 21st November.

This is an opportunity to have your voice heard!

Follow the link to see who you can vote for in our area. You will see our very own Taylor High School pupil, Malaikah in S4, is running to be elected. Good luck Malaikah!

These sessions will run for Senior Phase pupils. A list with details of each session can be found below.

September 11th, 2021 marked the twentieth anniversary of the 9/11 terrorist attacks of the USA.

Two decades on since the day that a pair of hijacked airplanes destroyed the World Trade Center towers, another plane crashed into the Pentagon  building and a fourth passenger jet crashed in a Pennsylvania field after passengers sought to regain control from hijackers, America and the world reflected on the events that saw 2977 people killed on September 11, 2001.

The event sparked wars in both Afghanistan and Iraq, created a domestic war on terrorism as well as generating major changes to security rules and surveillance in the USA and worldwide.

To commemorate the day, hundreds of people gathered at the National September 11 Memorial & Museum on the spot where the World Trade Center’s twin towers once stood. Among these were President Biden and former Presidents Barack Obama and Bill Clinton. They wore blue ribbons while the names of the dead were read off by family members and stories were shared.

All over the world, people observed minute’s silences in memory of the victims of the attacks. These were held at the times when the four buildings were struck.

Every year on 23 August, the world observes the International Day for the Remembrance of the Slave Trade and its Abolition. We remember the victims of the slave trade and commemorate its abolition.

The colonial empires of Western Europe were the main benefiters from the transatlantic slave trade. The trade transported people, mainly from Africa, in inhumane conditions to work as slaves in the colonial settlements.

The night of 22-23 August 1791 saw the beginning of an uprising in Santo Domingo, in modern-day Haiti and Dominican Republic. The uprising in the French colony inspired the Haitian Revolution. It also played a major role in the abolition of the transatlantic slave trade.

Therefore, the United Nations (UN) decided to commemorate this day as the International Day for the Remembrance of the Slave Trade and its Abolition.

The day is marked to remember and honour the victims of the slave trade and the systemic racism they endured.

The results of the Scottish Parliament Election 2021 are in…

The SNP has won with 64 seats in the election. The figure marked one short of a majority, but one more than they won back in 2016.

The success of the Scottish Greens, who won eight seats (an increase of two from 2016) means that there is a pro-independence majority between the two parties.

The Scottish Conservatives remain the party in opposition with 31 seats while Labour is in third place with 22. The Liberal Democrats have lost a seat and now have four.

International Women’s Day is a global day celebrating the social, economic, cultural and political achievements of women. All over the world, people come together to celebrate women’s achievements or rally for women’s equality.

Marked annually on March 8th, International Women’s Day (IWD) is one of the most important days of the year to:

Young people aged 14-25 can stand as a candidate in SYP elections. The next SYP election will take place in November 2021. Are you interested in becoming a candidate for the Scottish Youth Parliament elections this November?

Sign up for an information session on 30th March here: https://www.smartsurvey.co.uk/s/SYPInfoSession/

Get more information and watch clips here to see how being an MYSP can help your personal and professional development: Become an MSYP – Scottish Youth Parliament

Young people have the right to express their views freely and have their opinions listened to in all matters affecting them. – Article 12 of the UNCRC

“Hope lies in dreams, in imagination, and in the courage of those who dare to make dreams into reality.”