As part of my recent maths elective we were looking at the Ishango bone. Some mathematicians may argue that this form of tallying cannot be called true maths as there are no concepts of fundamental mathematics involved . However I am not convinced. Maybe it is because we take for granted numbers and the way we use mathematics in today’s society or maybe it is because we really cant accept that there may well have been, to quote a very important man, ”  life Jim , but not as we know it …”

We only need to look to some of the more isolated hunter-gatherer tribes in Amazonia which only have words for “one”, “two” and “many”, and other tribes that only have words for numbers up to five. It just shows  that in the absence of settled agriculture and trade,there is little need for a formal system of numbers. So this then raises the question again of Why do we need number and when did the concept of number as we know it today start.?

To help us as a group understand the concept of number we were set the task of devising a new number system, this was not as easy as we thought. 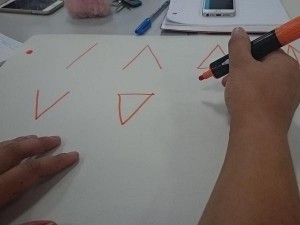 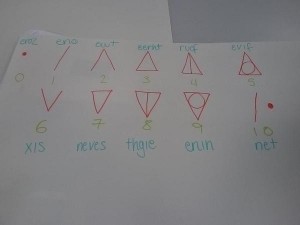 Our system of number

After reflecting on what we as a group came up with and looking closely at what we had come up with. It was clear we were using what we already knew… Shape, a mathematical concept, represented by the “names” of the numbers, merely inverted.

For me, personally, I was struggling to understand the basic concept of not having number. Then I had a Eureka moment. Perhaps…Just maybe … this is how our very youngest learners feel when presented with pages of numbers and asked to “do” sums.

Understanding that we, as adults, take for granted number and just accept that that is the way that it is. We often forget that we were also that young child that had no idea what numbers were. On reflection, I feel it is fundamental in our approach to teaching mathematics to get back to grass roots and develop our own understanding from the very basics of what is a number.

My love/hate relationship with Mathematics is becoming blurred…..