A memorable learning experience for me was when we explored the topic of World War 2 in primary 7. Of course this is a very popular topic in schools but I feel this is carried out with mixed success. The topic was my favourite we had done at school, however I feel it was due to a mix of the educational aspect and also personal reasons that it really interested me.

One reason I found the topic so engaging was that it was relevant to me. My granda had grown up during the war and he loved to tell us stories all about it. So when we started the topic in school, I had already heard all about bombings, rations and evacuation, and the effect these can have on someone. For me, exploring the topic was a way to relate what I was learning to the stories I had heard. During the topic, I felt a connection to that time period and also a connection to my granda.

Our teacher worked hard to bring the topic to life for us. We were encouraged to speak to our families if we had someone who knew about that time or to bring in any objects they had kept. I remember my granda telling me all about when he and his friends would go out after the bombings picking up bits of shrapnel that were scattered around. I enjoyed bringing these pieces into school along with his old ration book and sharing this experience with my classmates. The use of resources from that time provided a link between us and the period.

The teacher also related the topic to our local area. Living by the coast, we had all seen big blocks on the beach but not known what they were for. Through the topic we found out that they were anti-invasion defences to stop tanks. It shocked us all that they were mostly still there when they had been built so long ago. This gave relevance to our learning, as those defences are still there today we could picture them being used, and it showed us that the war had an impact on where we lived. As farming is a big part of our local area, we also spoke about how that was impacted by the war. We discussed the roles people played and how people would be called away from their jobs except from the farmers. The teacher used this to introduce the concept of rations to us in a way we could understand, discussing how the food that was grown by farmers would be regulated. We were able to compare the differences of this to how we lived, and discuss how we would feel if we were living with those restrictions. Speaking about the impact of the war on areas we knew well brought the topic to life for our class as it made it feel more real. It made clear to us that these were real events that happened to real people, not just stories for us to learn about. 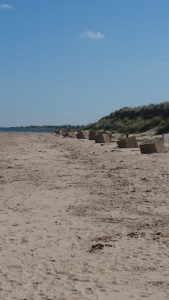