Would you believe me if I said that mathematics can judge your facial proportion? Well unfortunately it can in a very accurate and understandable way.  In our most recent input for our Discovering Mathematics module we unearthed how to draw a face accurately. For myself I have always had a creative ambition and enthusiasm, but I can say that I consciously – and even happily – avoided ever drawing an accurate face to gain my Higher Art and Design Qualification.  It wasn’t until this input that I have ever successfully accomplished my avoided dream.

Initially we were instructed to draw a face on one side of an A3 piece of paper. As you can imagine this triggered a few negative responses along with ironically a small part of art anxiety rather than maths anxiety. Like myself you will begin to wonder how on earth drawing a face has any connection to maths. It wasn’t until we were indulged on the beauty of drawing an accurate facial proportion. Everyday countless people have looked in the mirror and ridiculed there physical appearance.  I would argue that at this moment in time there has never been a greater pressure worldwide to look, rather than be,  your best. However, without knowing it you are judging the mathematical proportions of your facial features rather than your face itself.

To break it down simply, the shape and size of your face can be segmented into different groups. This discovery can unfold the ground breaking realisation that the human face is like a jigsaw. There are many different parts which aline and fit together to construct each of our individual faces. This is make clear by what is know as the Golden Ratio.  This discovery by Dr. Stephen Marquardt identifies the proportions and measurements of each facial feature that would form the desirable face (Meisner, 2014)  . In most cases this discovery has influenced reconstruction in cosmetic surgeries of people world wide. This is exactly what we considered when redrawing our original face.  Ideally the stature of a perfectly sculpted face would include; 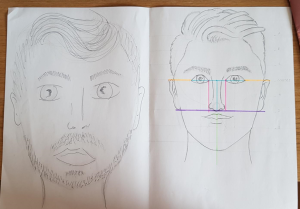 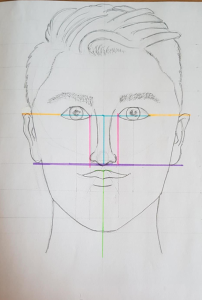 As seen in the picture above, when considering these proportions and measurements it made it dramatically easier to redraw our original portrait. The contrast when considering and understanding proportions is undeniable. Understanding the relationship between features meant that shape, scale and proportion became much more understandable. Mathematics has made this possible through comparing measurements of facial features, without this an ever-growing cosmetic would not be able to function. By segmenting features together and build considerable knowledge of these proportions, the end result has greater accuracy. It achieves realistic dimensions of the human face.

The golden ratio vs. primates

Studying this topic immediately fueled my interests to link the facial proportions of The Golden Ratio to the facial structure of primates. Science has generously allowed us to explore the connections and evolution of humans themselves. Without delving to much into scientific theory, the theory of evolution devised by Charles Darwin concludes that all species have devolved from a small string of lifeforms (BBC, 2014). This is where the link between humans and primates can be made. Over time genetic differences have reshaped our species both physically and mentally. The theory of evolution has brought to life scientific evidence that humans are derived from primates. Using my new profound knowledge of facial proportion I thought this may provide and enciteful comparison. 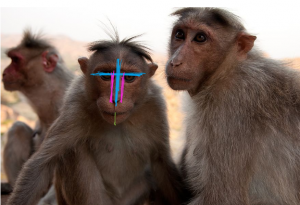 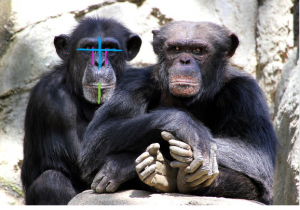 Looking at the pictures above you can see how some proportions of The Golden Ratio can seen within the facial structure of these primates. Although there are some physical difference such are the ears, there is a clear connection between our faces and these primates. By showing that these primates do not have a the structure of The Golden Ratio this can in fact relate to the differences between physical appearance among humans. Our eyes don’t match. Our ears don’t match. Everything about our faces are different yet we all have small common forms of facial structure, just like primates. As explained by Burrow et al. (2014) humans and primates can be physically compared because of the way our muscles are positioned in our faces. It is this connection which makes it possible to see similarities between ourselves and primates using The Golden Ratio.

In terms of the bigger picture in depth exploring mathematical concepts within the primary school will open rather than close the mind of children. By weaving concepts together and making cross curricular links children will be able to access the world around them through a new lens. This will allow them to use imagination and fun within the world of maths rather than be tied to textbook procedural work. A key concept which drove the Profound Understanding of Fundamental Mathematics according to Ma (2010) is Basic Ideas. This allows teacher to craft they’re approach in a way the takes a component of maths (in this case proportion and measurement) and spark by guiding children through its exciting structure. Therefore, the maths curricula will not inhibit but expand children’s approaches and interests in the world we are a part of. Furthermore, this also signifies the importance of competence within teachers themselves. Unless and educators work individually, and together as a body, to acquire profound understanding of fundamental mathematics how can we expect pupils to feel the same? The level of understanding which educators are capable of mimic the level of understanding which their pupils can achieve (Bregner and Groth, 2006). Building on mathematical knowledge and relating it to other concepts throughout the education curriculum will only encourage children to achieve in maths rather than be limited by teachers’ deficiency’s. This attitude should be established both nationally and internationally in order to provide children with the opportunity achieve with flexible and stable knowledge and understanding.

Education is one of the first places that allow children to build a realistic foundation of knowledge. It wasn’t until my first school placement that I began to understand the importance of putting fact into visual representation that all children understand. Therefore, if this is inaccurate it will result in a generation (or even generations) of flawed understanding. There is no better example of this than Space.

Without most teachers realising, there will be a time that a child in there class stares out of the window imagining what is beyond our drizzly, damp and occasionally blue sky. It is this unknown environment which beacons children to explore and build there experiences and knowledge of Space. I can happily say that I was most definitely one of those children. Primary 5 was the year of Space! Without a shadow of a doubt the experience that I had was incredible, I was well on my way to becoming a fully fledged astronaut. However, despite having amazing experiences, I cannot say that my knowledge of Space is at all realistic. Sadly this will be the case for many others who have or are in education at this time.

Until recently, I did not realise the enormity of Space. There is no word to describe how ginormous Space actually is and this is exactly where Space education must start. For me this is where my own knowledge is false because I was not aware of the scale of space.

Encouraging ourselves as Educators to understand scale is extremely important, not only to physically represent Space in our own mind but in the minds of the those within the classroom. As fun as it may sound, taking children to Space is not a class trip that can be offered within my lifetime. This is why it is so important to allow children to experience accurate scale. This can be linked to the ideas of a logarithmic scale present in the minds of those inadequate and unrealistic experiences. Bellos (2010) maintains that children believe that with unresolved understanding will be unable to fully interpret the realistic size of maximal numbers. From experience children believer that space looks simplistic; with planets knitted closely together on a perfectly circular orbit surrounding the sun.

In reality it is believed that space actually looks like this!

This is only a small part of Space. Space is actual made up of millions of solar systems that most of which can be easily understood. In other words the universe is made us of billions of stars, these stars form galaxies and galaxies form the universe. Overall, in order to promote a Profound Understanding of Fundamental Mathematics educators must invite children to build knowledge into compound understanding. This can relate to Ma’s (2010) key concept of connectedness which focuses on connecting mathematical procedures to wider concepts, thus enabling a greater understanding. In terms of Space, knowing the size of an the environment highlights intellectual solidity (Frobisher, 2007). Only when this happens children will be able to be able to explore the immensity of Space purposefully.

Bellos, A. Riley, A. (2010) Alex’s adventures in numberland. London: Bloomsbury.

Frobisher, L.J. (2007) Learning to teach shape and space: a handbook for students and teachers in the primary school. Cheltenham: Nelson Thornes.

The Science Asylum (2017) How far is the Moon? Available at: https://www.youtube.com/channel/UCXgNowiGxwwnLeQ7DXTwXPg.  (Accessed: 25 October 2018).