Our second week into the Integrated Arts module further explored the notion of creativity and how creativity is present in everyone- even those that claim they cannot draw. During our visual arts workshop we discussed how as future teachers we could encourage creativity. Many children in a classroom may be reluctant to create something due to feeling self-conscious and insecure within their abilities. To explore this concept further we looked at a book called “The Dot” in which it described a stubborn and reluctant child that was adamant she could not draw. It describes how a teacher encourages even her smallest contributions (which was making a dot) and praised her efforts. This book was interesting as it touches on how to approach children that may be unwilling to draw and create. As a teacher it is not always effective to praise the outcome, but to praise the efforts (Dweck, 2007). Relating back to the book, the teacher doesn’t acknowledge the fact that the child had drawn nothing but a dot, she understands that this attempt, albeit small, was the child’s contribution. Dismissing the child’s efforts would be ill teaching as it could result in a child developing further negative attitudes towards the arts. This was interesting to read as it made me understand the power of encouragement and praising efforts rather than outcomes as it made the child want to try harder and explore more. This is the essential part of praising efforts, as children won’t strive for work that they consider “good” they will strive for innovation and creativity, to explore different methods as that is where the praise comes from. 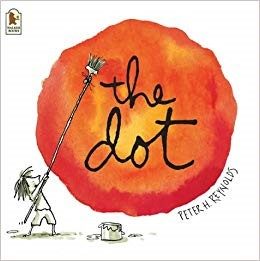 The key lesson from today’s workshop was that everyone can draw (if you can write, you can draw) it was as simple as that. In order to test this theory, I coated my hands in black ink and made random imprints on a sheet of white paper using different positions of my hand. This resulted in sporadic irregular markings, which I later developed. Taking a pen, I closely examined each shape and created a small visual. This really allowed me to test my imagination as it was difficult seeing a shape where there was just a black smudge. It encouraged me to test my creativity and gave me a sense of satisfaction as I was able to turn what was originally nothing but an unconscious marking, into a conscious creative outcome. It was helpful having a starting point with the ink makings rather than just drawing on a white paper. This tested a quote from the book “make a mark and see where it takes you”. It was interesting to see how different people’s minds work, as other people had very different drawings in comparison. Whilst making the art works, we had aprons on, and Diarmuid make a point in noting the importance of providing children with an apron or any set of overalls that would cover their uniforms. The aprons provide a sense of protection and this allows children to not hold back and immerse themselves within the materials without fear that they will ruin their clothes. This baught me back to the point that Diarmuid made last week, to have a tolerance for mess, I understood that in some situations this phrase was to be taken literally. It is okay for children to make a mess, as this is their way of exploring and experimenting with new materials. It is the role of a teacher to not discourage mess, children that are sat neatly at tables and not making mess, are children that are not creating, these children are not experimenting, these children are just drawing, and there is a very big difference between drawing and creating. 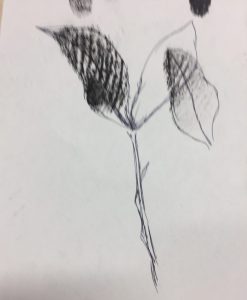 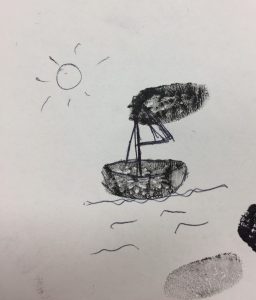 During the Drama input we explored the importance of visual thinking within Drama. This is when visual aids such as pictures can provide a sense of inspiration for a drama piece. In today’s workshop our visual was a painting of a tenement in Glasgow. It was created by a Scottish artist Avril Paton in 1993 called “Windows in the West “. The conventions we explored when acting out a scenario was still image and thought tracking. In groups we decided to act out a scene during the World War 2, where a mother gets a call that her husband has just died at war, leaving her widowed and her three young kids without a father. During this scene we stayed in our position just after the phone call and I stepped out of the scene and explained to the rest of the class what was going through the wife’s mind. I felt more comfortable doing this as the concept of acting was still new to me. I find giving children that may be shy and uncomfortable the option of carrying out this role may be effective as it gives them a choice. It allows them to still be a part of the drama yet have a shorter role in acting. This allows children to immerse themselves slowly into the expressive environment, which they may feel more comfortable with.

Role play develops vital skills in young children as it helps develop their communication skills. In drama most of the activities are groups based, allowing children to learn and create in a diverse range of groups. Working in groups also allows children to develop their collaboration skills as they must create ideas and scripts they all agree on. It encourages children to become more confident as they take on roles that may be different to their actual personalities, allowing them to explore and create as drama cultivates an environment that can spark imagination. Drama is also a great way to inform children about important topics such as the World War, for example our group explored a wife’s reaction to her husband’s death during that time. This provide a great learning opportunity that allows children to experience what life was like during that period and how many people lived.