While scrolling through facebook earlier today, I came across this photo in a post about children getting dirty while learning. 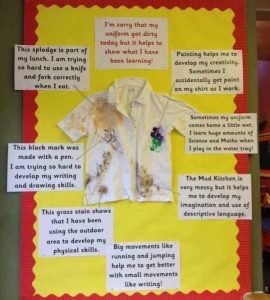 I was immediately reminded of a lesson I had taught in my P7 class on placement, and sent it straight to the class teacher who had been my mentor, having a little giggle.

The lesson was Science, and was the cornflour and water experiment (or Oobleck, as my class told me it was called). If you’ve not seen this done, it’s pretty cool and left those in my class who had never seen it before really excited by it. Unfortunately, it also left the carpet, desks and pupil’s skirts/trousers/cardigans very messy. But the main thing is, it got the class excited. They wanted to learn, they wanted to do the lesson. Every single pupil who was in the room was engaged, which was extremely rare in the class I was teaching.

Yes, the children went home and had to wash their uniform on a Monday night. Yes the cleaner was probably not my biggest fan that night (I avoided hanging around long enough to see him/her). But I can honestly say it was probably one of the most stimulating lessons I taught in my time at the school, and probably one of few lessons they would remember for longer than 24 hours.