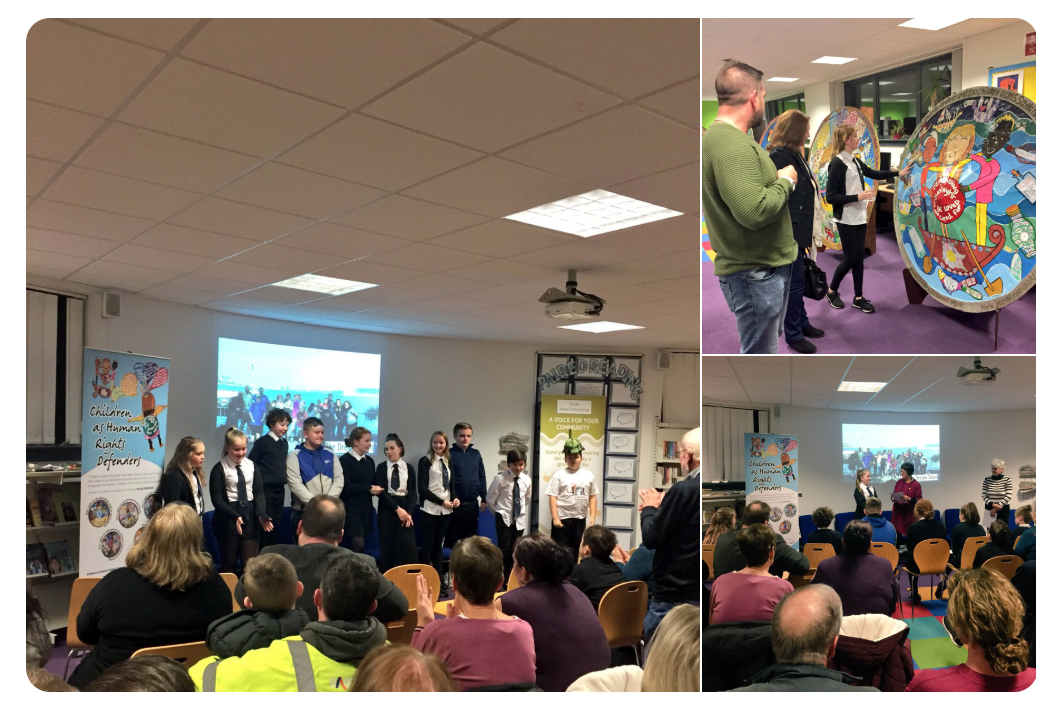 It’s hard to believe a month has already passed since the DGD! This week, we met with the children to reflect upon their involvement in the DGD and to celebrate their successes with family, friends and the wider community. We held a presentation at the children’s school to showcase the children’s achievements. A room full of love, pride and admiration for the children’s incredible work! 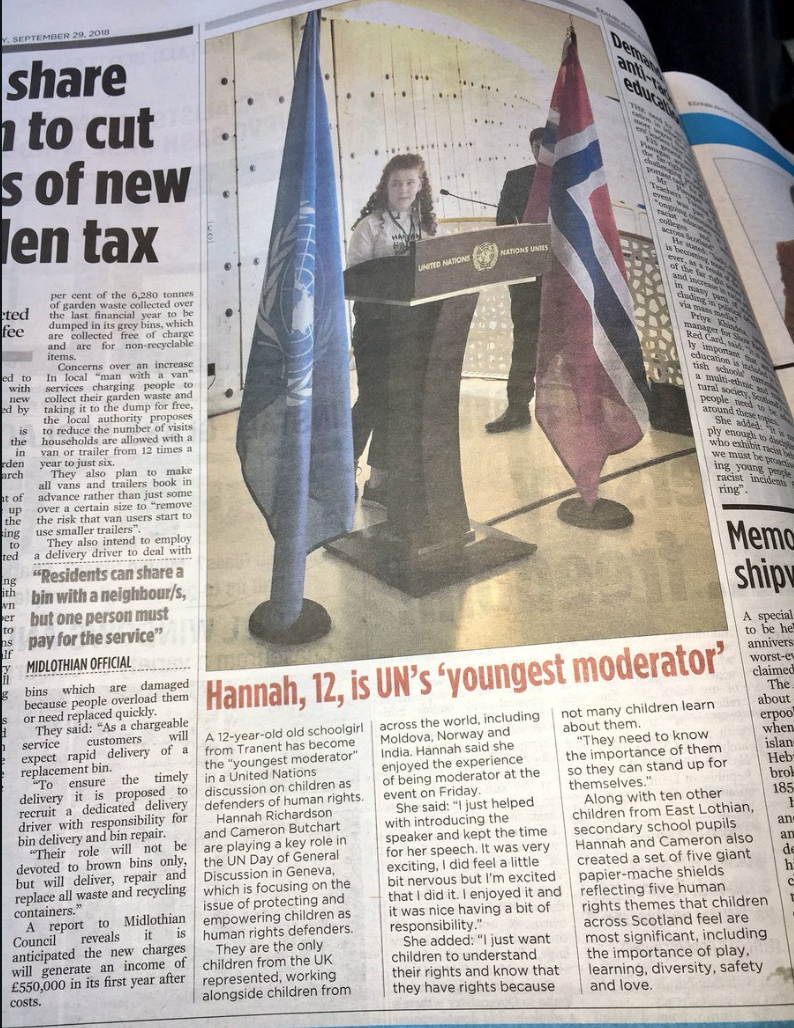 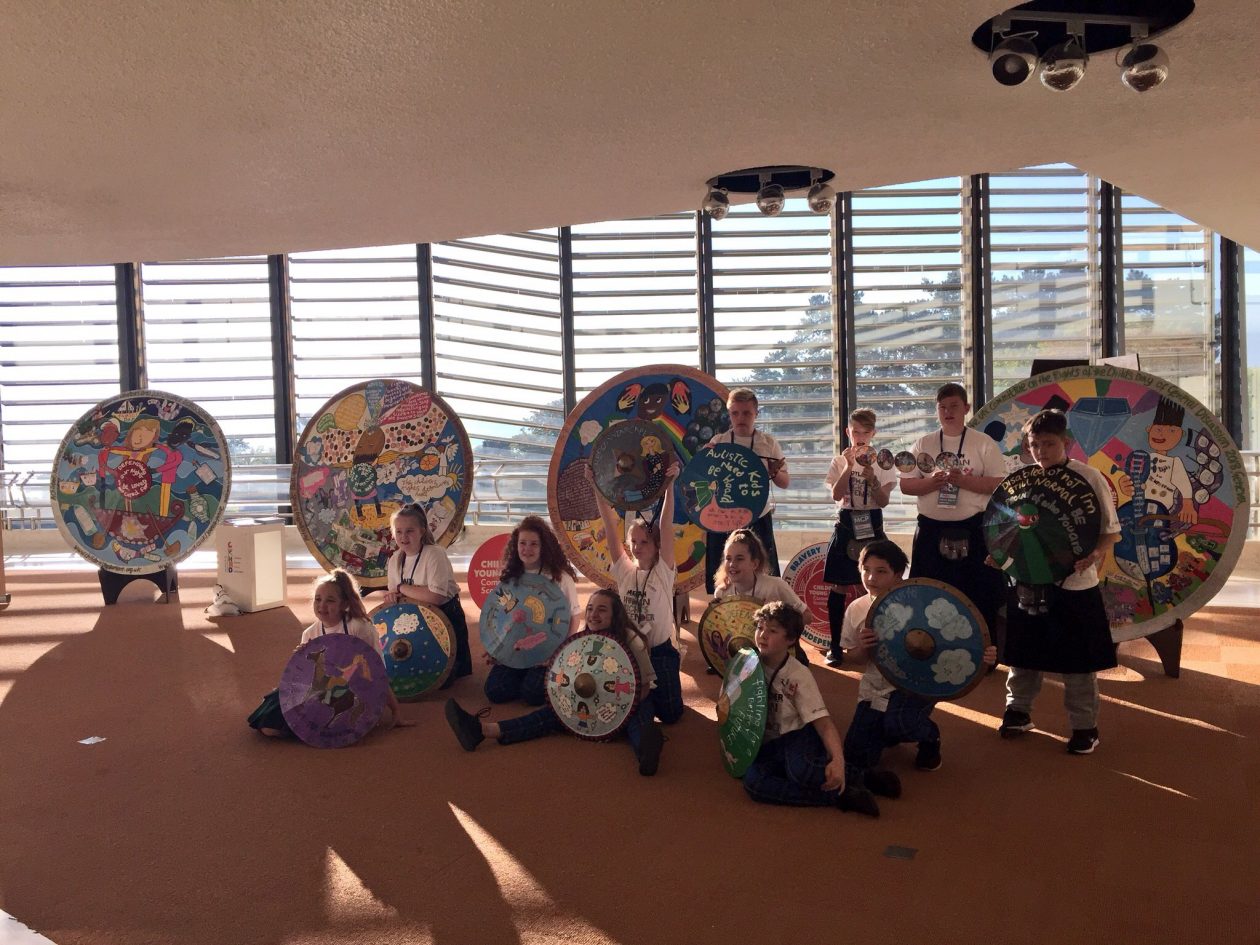 Here, the MCPs from East Lothian share their experiences of their time in Geneva for the UN Committee on the Rights of the Child’s Day of General Discussion 2018.

“We arrived in Geneva after a good flight – it was some people’s first time on an airplane! There were a few nervous people but everyone contributed to making everyone feel happy. Once we arrived, we made our way to the John Knox Centre. It was really nice and calm – there was lots of space for us to be outside which was good because it was very sunny!

When we got to the John Knox Centre, we were given our room keys and we each had a surprise waiting for us on our beds – a bag with our shield on it, our very own Human Rights Defender t-shirt and a little piece of chocolate! We had some time to play and unpack. We were very excited to be reunited with Hannah and Cameron who had been busy preparing for the DGD with the rest of the Children’s Advisory Team.” – Anna & Faith 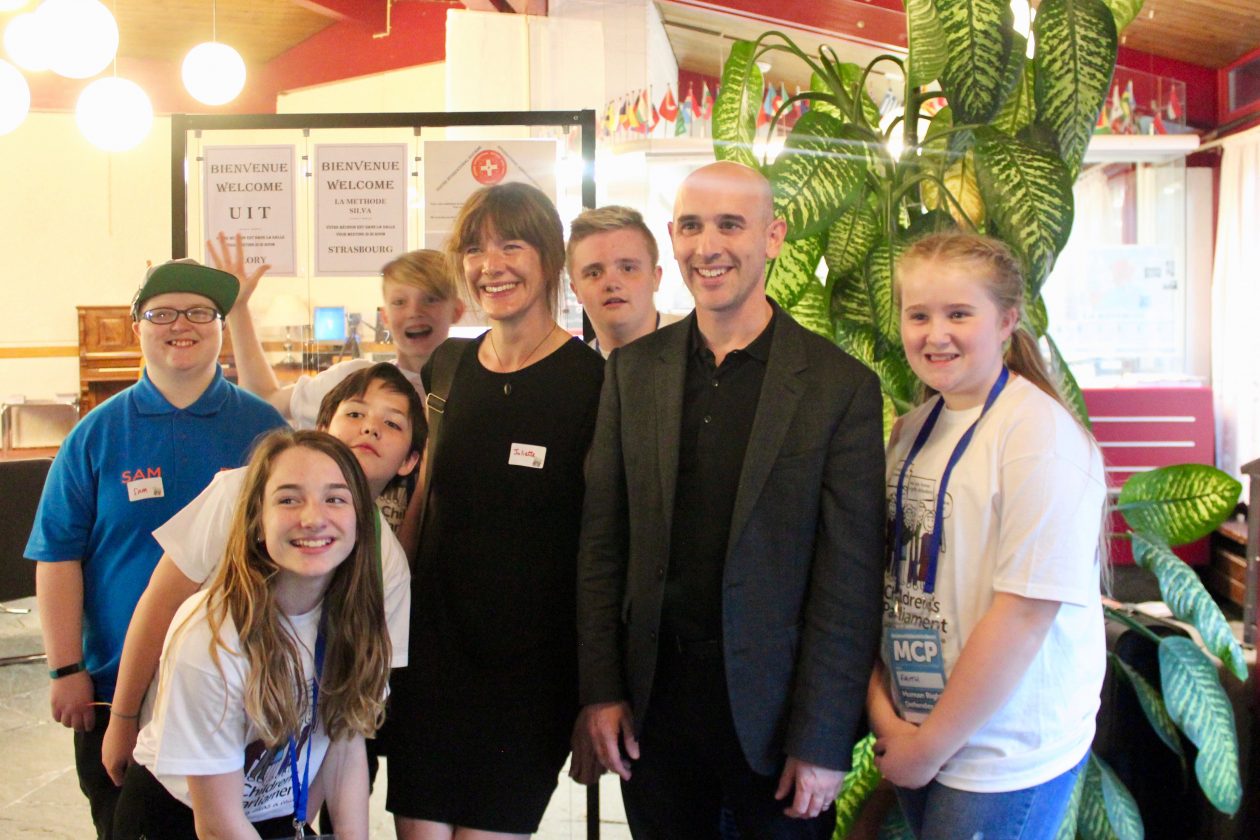 “On the first night, we had a BBQ and invited some of the other children and adults who were also going to the DGD. Our role was to make people feel welcome. We had to greet people, be friendly and welcome them with warm hugs. I really liked mingling with people from other countries and talking about their life stories.” – Megan

“What I liked about the BBQ was that I got to meet new people. I was sitting beside this man called Henry who is from Zambia and he was talking about how war has affected his country. I think the discussion with Henry helped me to feel a little bit more confident about the DGD as he’s someone from a different country and the people that we were going to see [at the DGD] were also going to be from different countries. If I just did the same as what I did with Henry, then I could get to know other people a lot better. I never thought I could do something like this but now that I’ve done it, I feel confident in myself.” – Aiden 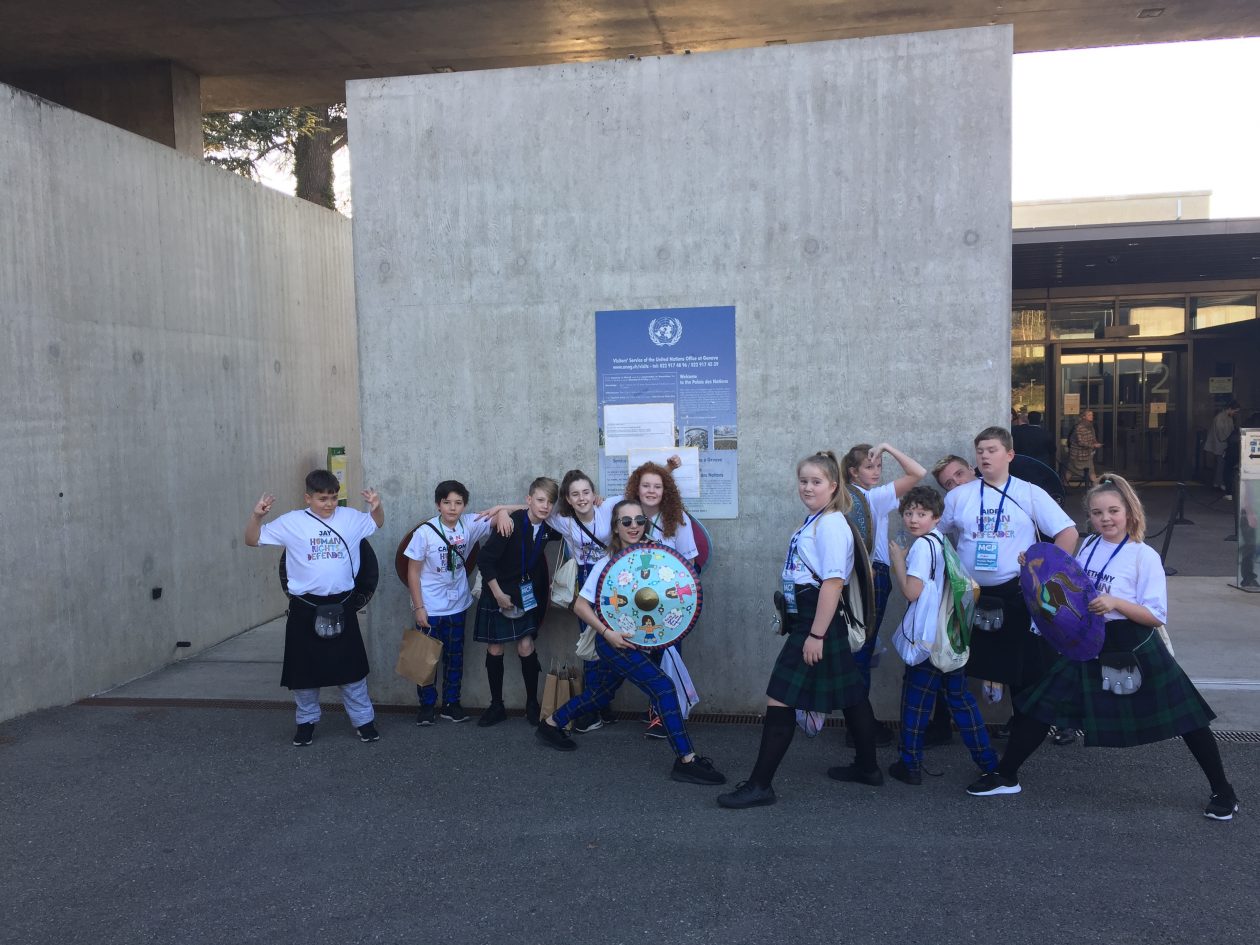 “When we arrived at the UN Palais des Nations for the Day of General Discussion, we went into a big room where the people were talking about children’s rights. We had to put headphones on so if anyone was talking a different language, someone could translate it for us. We listened to lots of interesting speeches. I really like Keita’s story – he went to jail for sticking up for children’s rights.

Later on, we met with Keita and gave him a tour of the shields. It made me feel happy to give tours to people from different countries who want to promote and give children their rights.“ – Shea

“During the DGD, we gave tours of our shields which were part of the DGD exhibition. The tours were very busy and lots of people were interested in the shields.  I gave a tour to a man called Michael who is the Director-General of the UN Office in Geneva. He gave a speech and he said how much he liked learning about the shields. I hope all the adults will tell people about the shields and not just about the art but the messages on them.” – Faith

“When we were showing people the shields, it 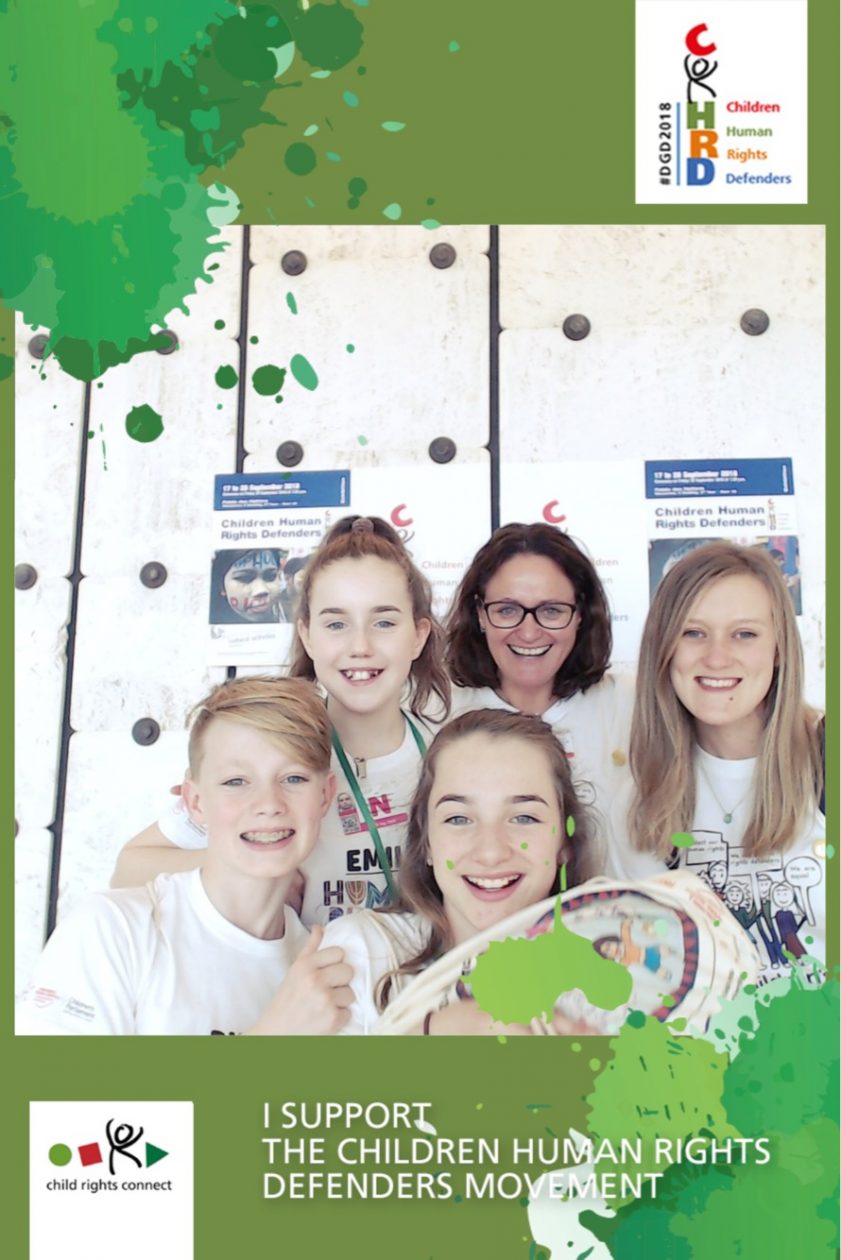 felt really good.  We were all nervous at first and it took a lot of courage to talk to strangers and people that we didn’t know.  Because a lot of people didn’t speak English, we had to take it slower. When we speak, we speak really fast so we had to speak slower so they understood what we were saying.  When people listened to what I had to say, it felt really nice like they were listening to what I had to say about rights. I think all adults should take us a little bit more seriously, appreciate what we have to say and respect what we have to say.” – Bethany 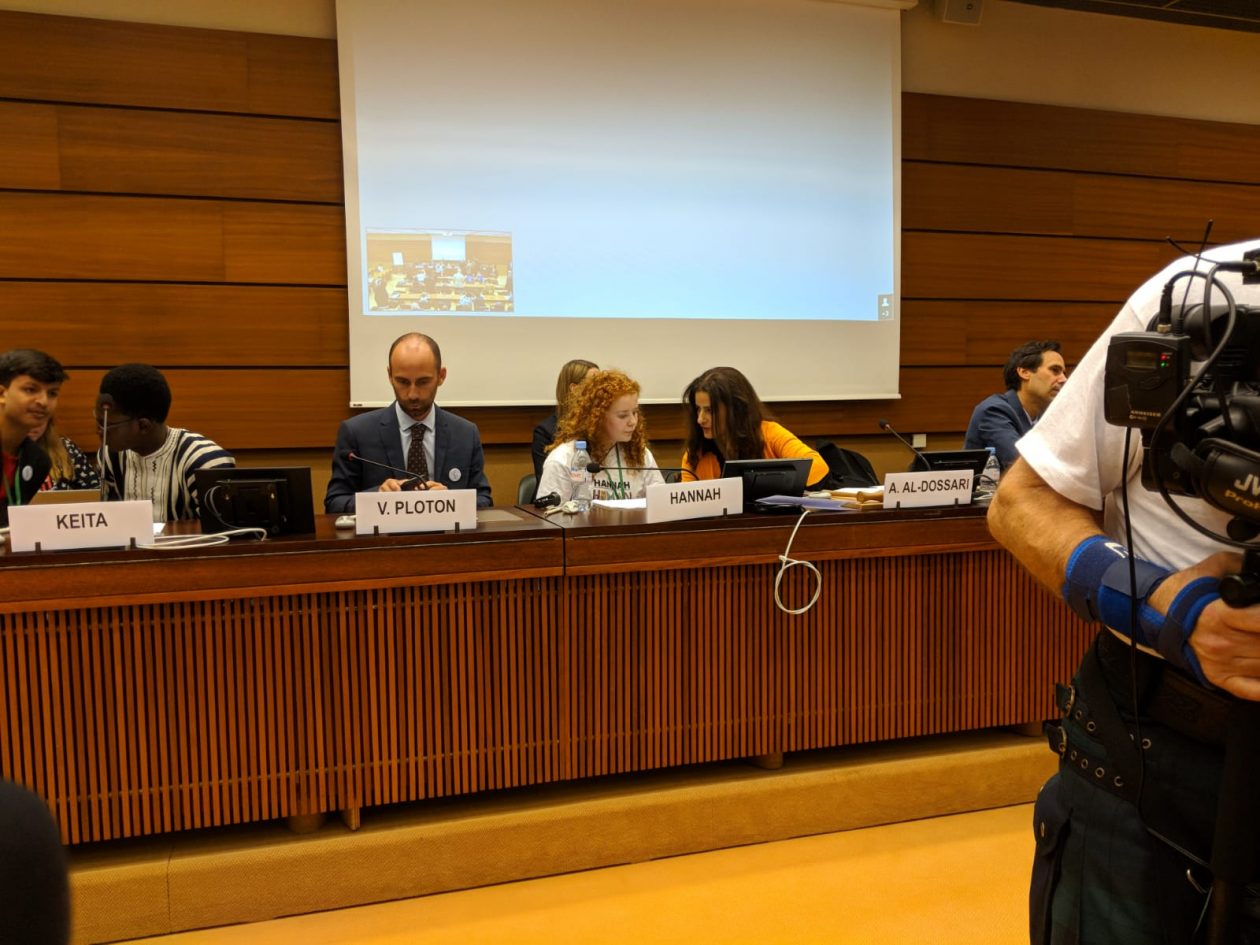 “Over the past six months, I’ve been a children’s advisor to the UN Committee on the Rights of the Child to help them plan the programme for the first ever global discussion focusing on children as human rights defenders. I was invited to moderate one of the discussions. It was an exciting experience, but I was also really nervous.

I did have to tell one or two of the speakers that their time was up and they needed to finish talking and I was really nervous because I didn’t want to come across as rude but I think I got away with it!” – Hannah 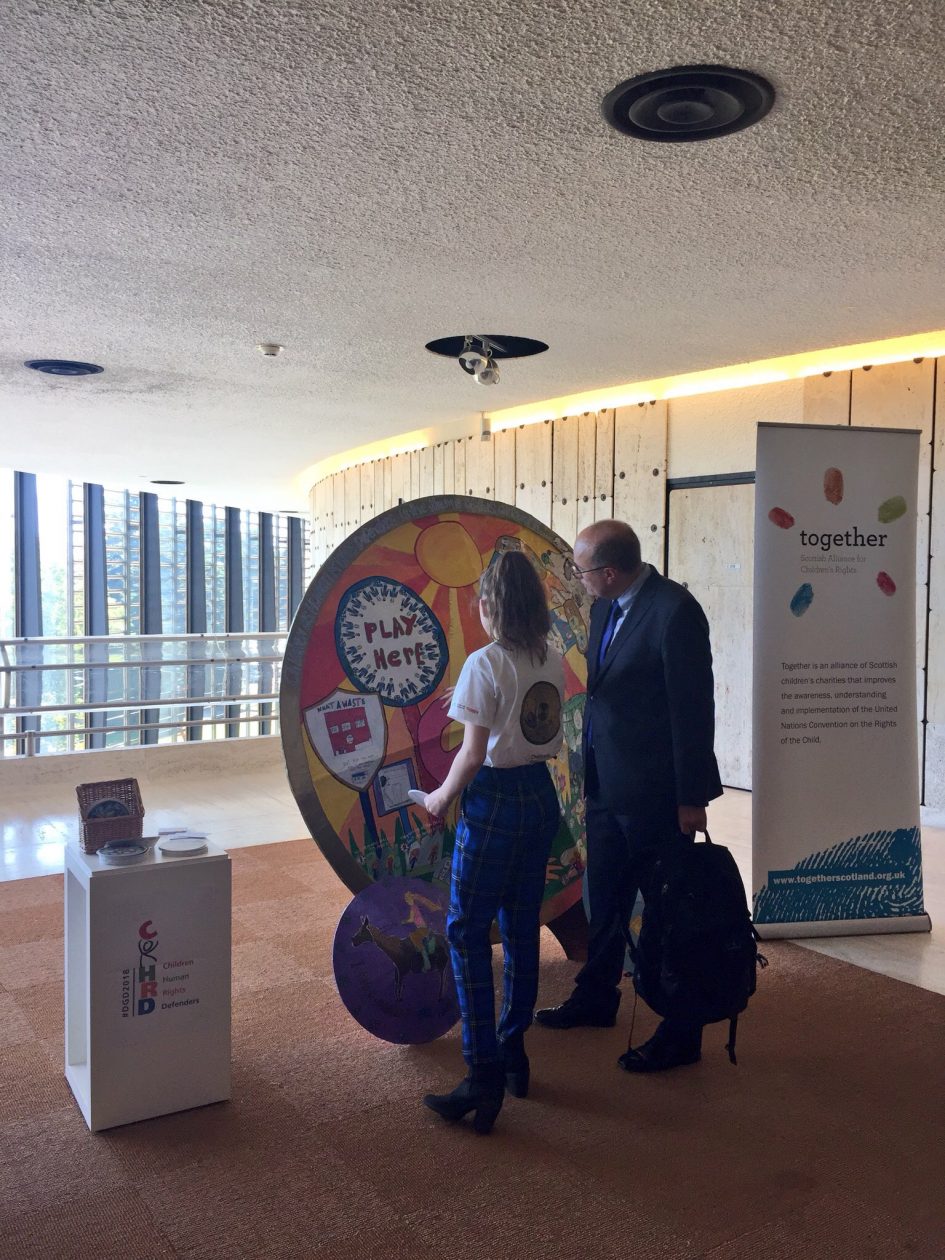 “Giving tours made me feel happy because I was teaching people from foreign countries more about what people in Scotland think. I think it’s important that adults listen to children as we actually have a voice and we have things to say – we explain it a wee bit more simply than adults do but we still get the point in. We can help change the world in every way possible just like adults.” – Jay

“Godzilla’s favourite part was playing hide and seek with everyone when we were giving tours of the shields!” – Jay (on behalf of his toy Godzilla)

“My favourite part was the whole atmosphere in the Palais des Nations – I was there to make a difference to the world and so was everyone else!” – Cameron 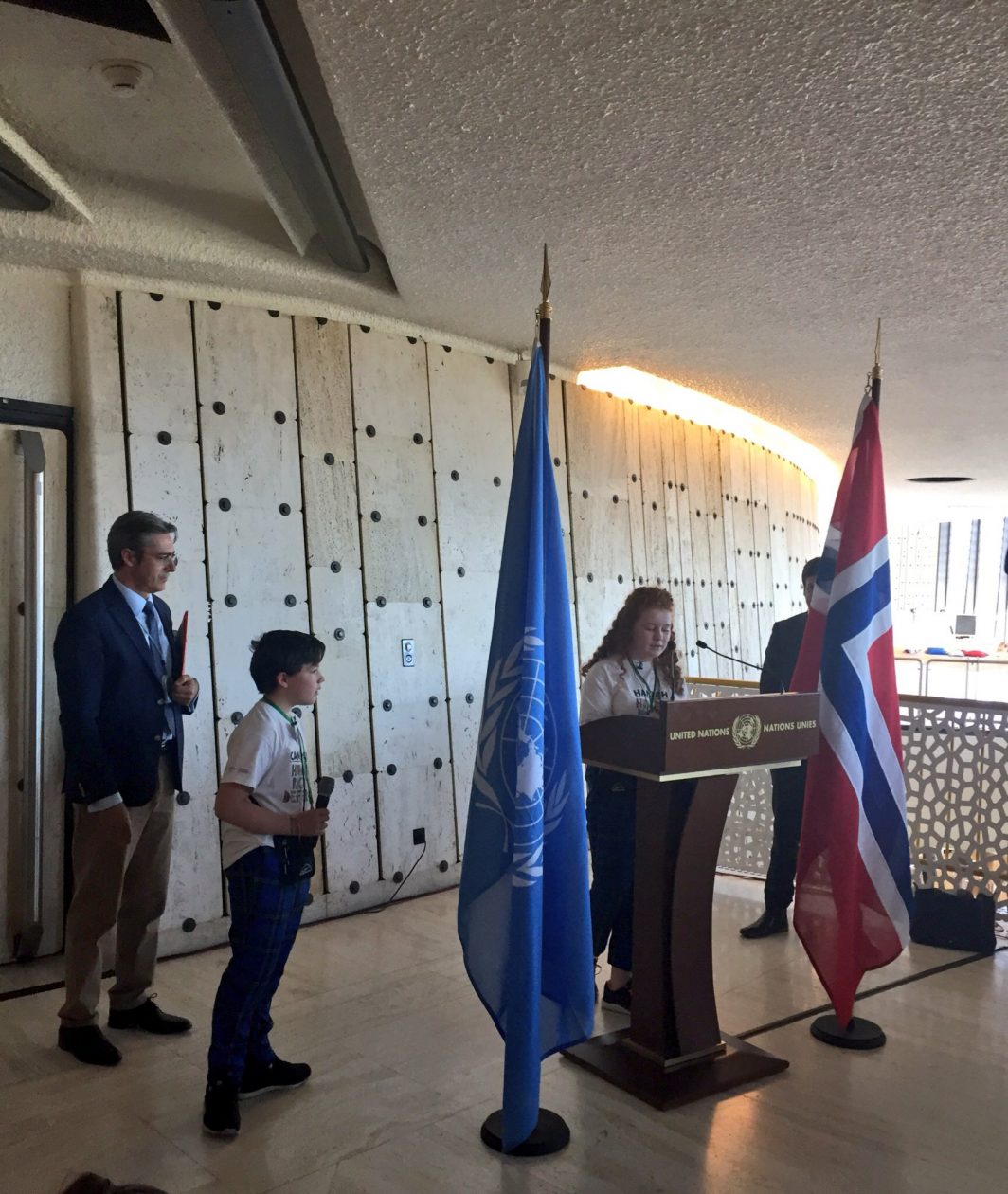 A day of sightseeing and celebrating Faith’s birthday! 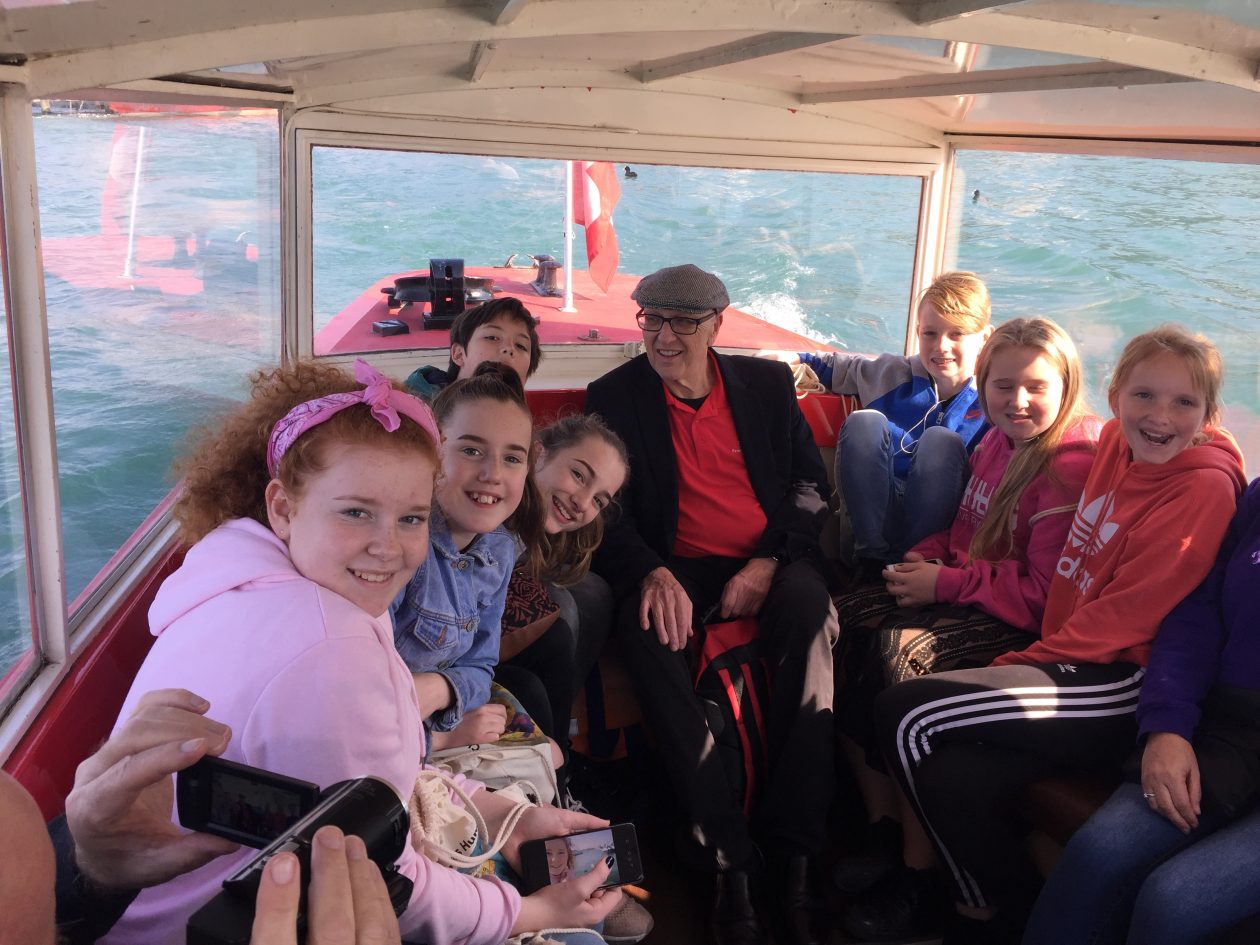 “My favourite part of the trip was the sightseeing. The day after the DGD, we explored Geneva and visited the Jet D’Eau. The sun came out just as we arrived at the Jet D’Eau and a rainbow appeared! Being with Children’s Parliament again back in Geneva felt really good. It’s felt different this time because we were with different people but I think I enjoyed it more this time.” – Emily

“The past few days have been life changing especially to come to Geneva for a second time and to bring new people with us. I think we’ve done really well. Some of our group didn’t want to come at first but they all came and I’m really glad because if they hadn’t it wouldn’t have been as fun or as great as it was. After this trip, I feel much close to the people who joined the project in June.” – Anna 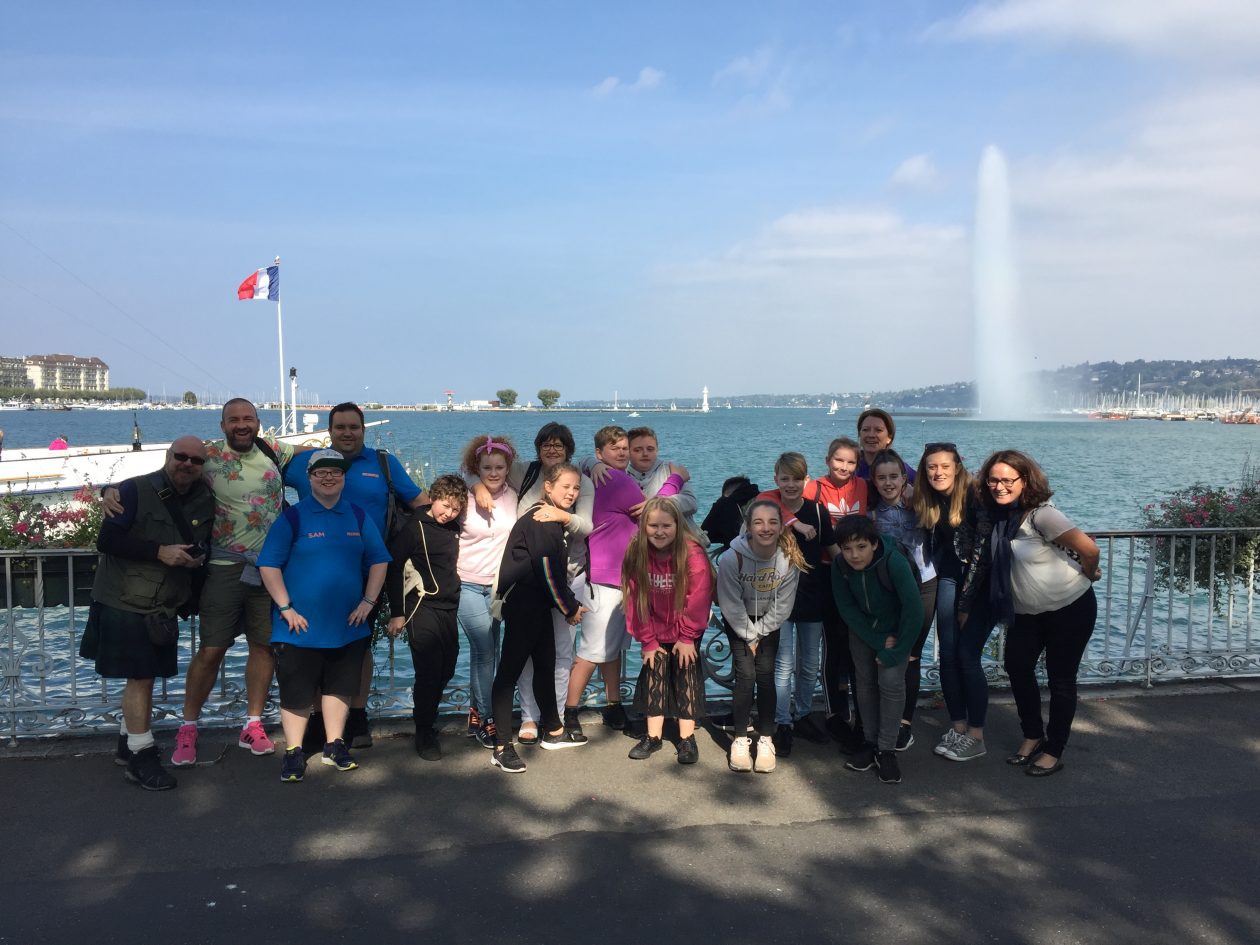 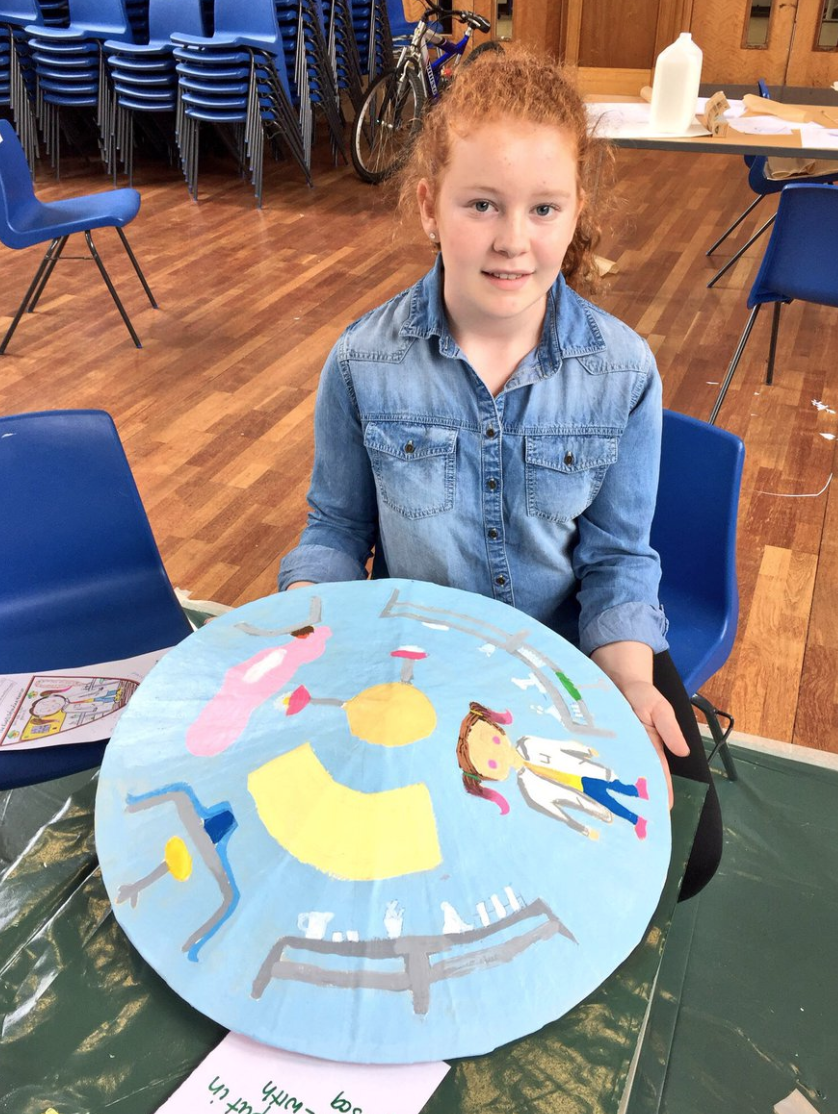 “I’m a #HumanRightsDefender because I want girls to know that they can grow up to be anything they want. My shield is about my love for science!”Hannah, MCP aged 12 and member of the Children’s Advisory Team is now in Geneva and ready for the #DGD2018! 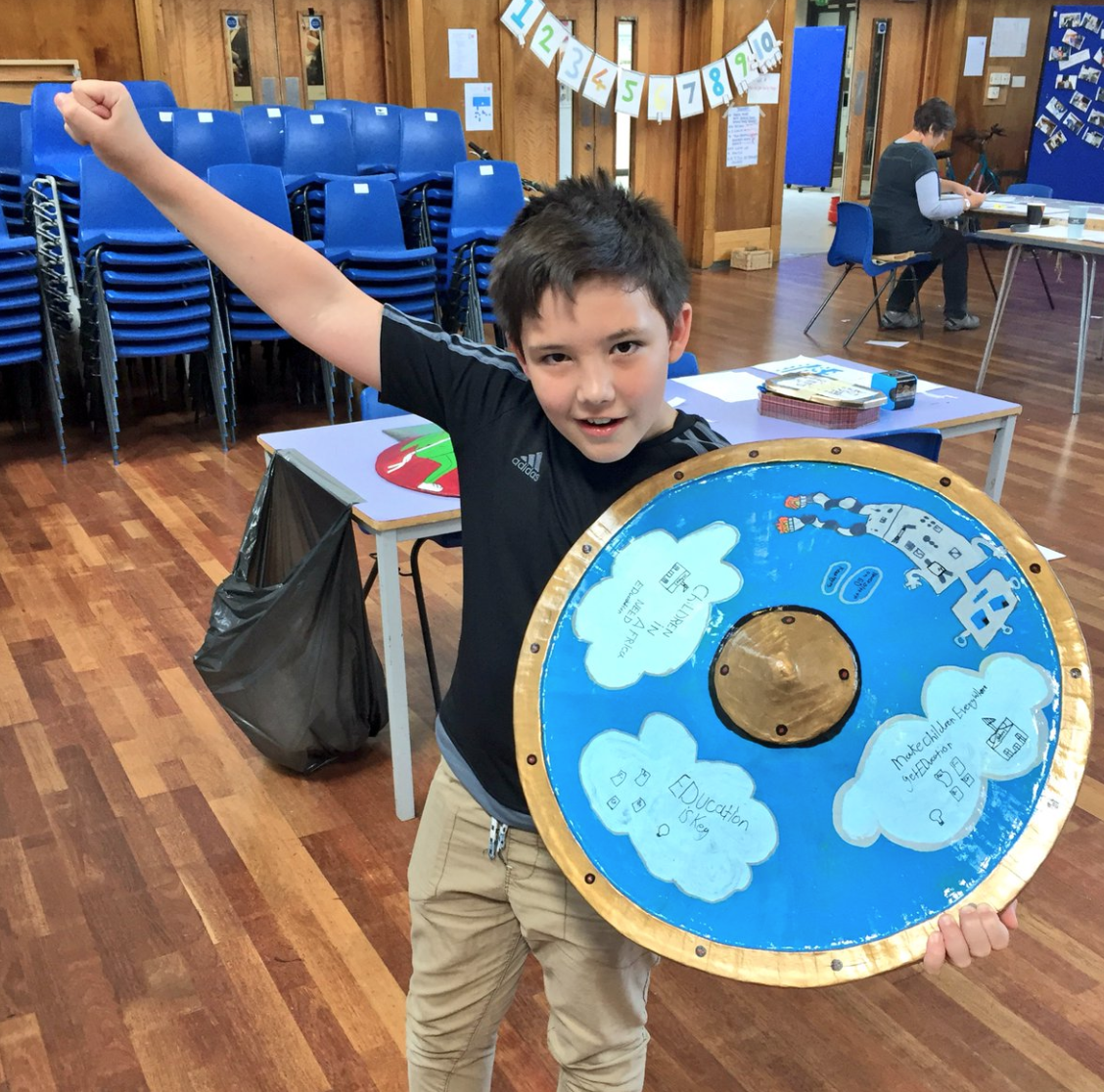 “I’m a #HumanRightsDefender because we must never underestimate the power of rights.” Cameron, age 12, is one of two MCPs on Child Rights Connect’s global Children’s Advisory Team planning the #DGD2018. Today, Cameron is off to Geneva to join the advisors and prepare for Friday! 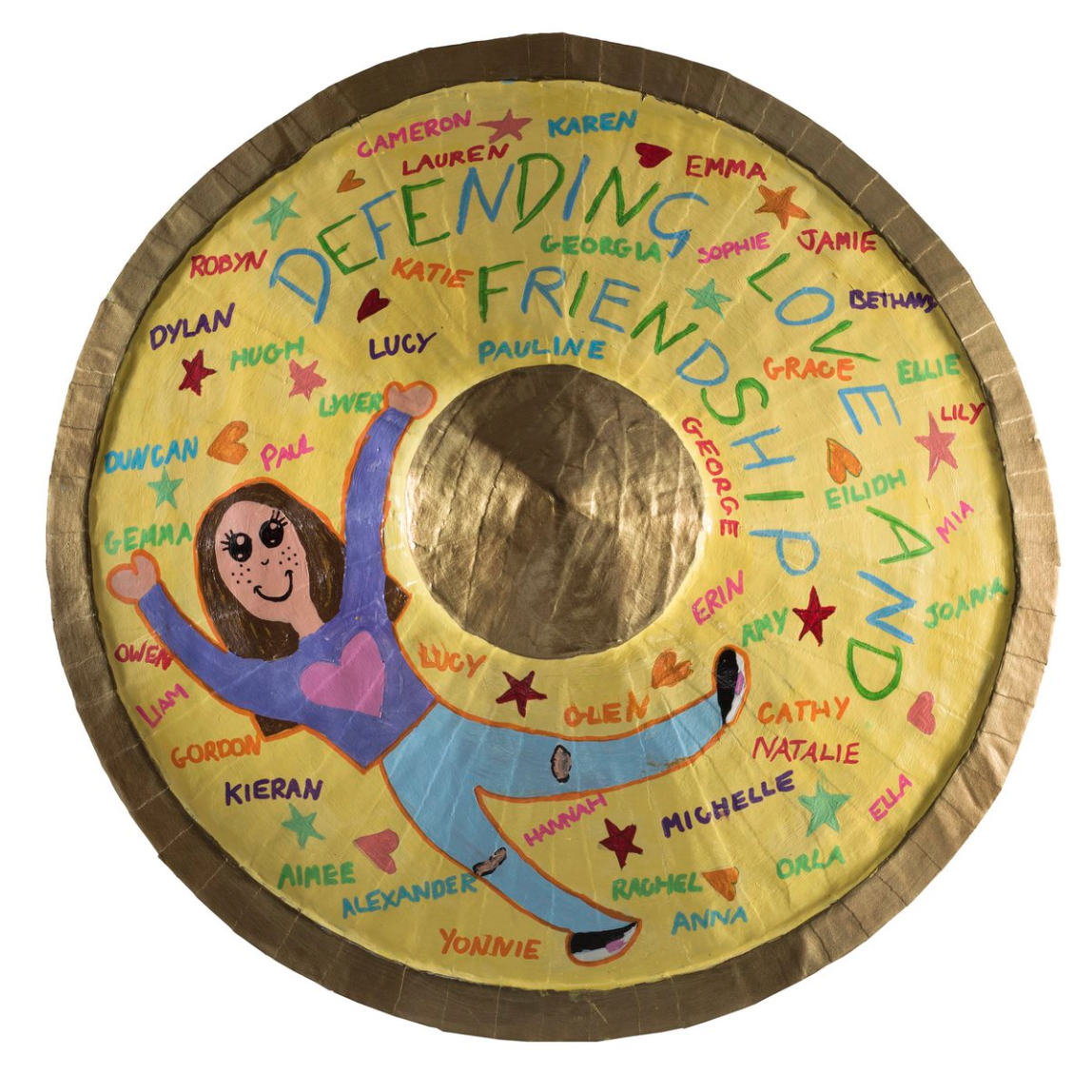 “I’m a #HumanRightsDefender. If children’s rights aren’t respected today, they won’t respect human rights when they’re older.” Emily, MCP age 12, is passionate about defending the right to have friends and be loved. 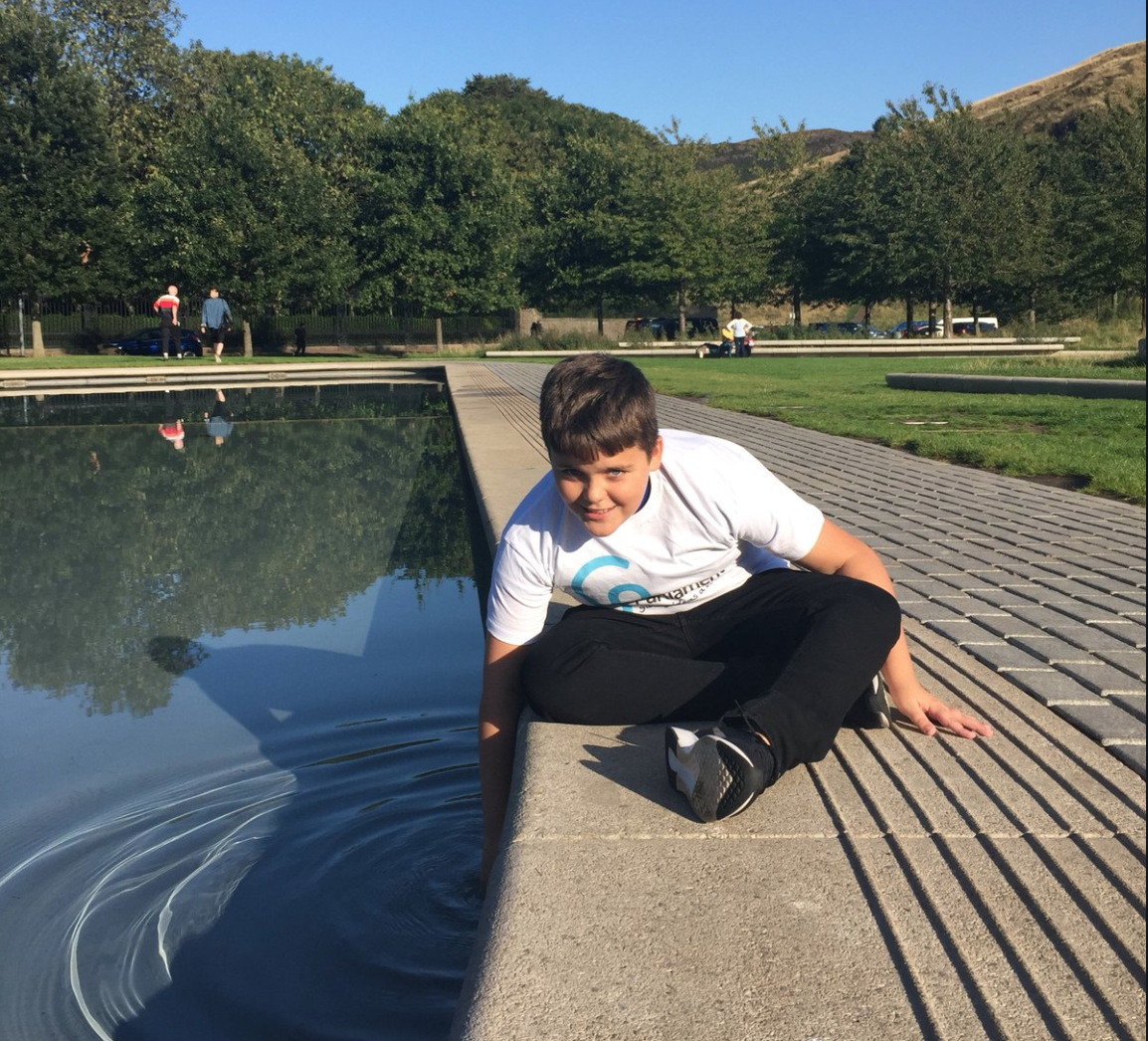 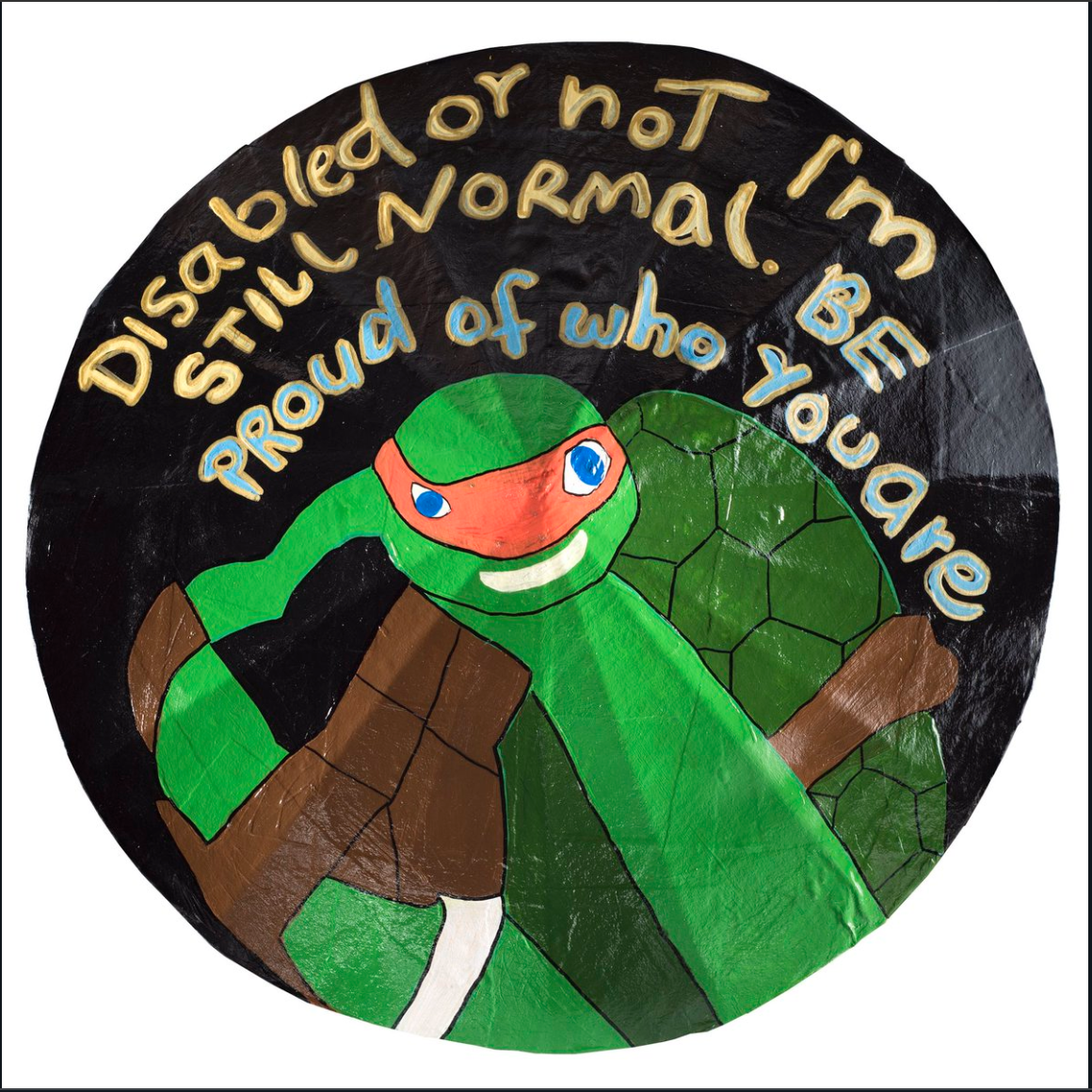 “I teach people to treat disabled people with respect, just like everyone wants to be treated. I’m excited for the #DGD2018. It’ll be the first time I’ve left Scotland!” Jay, MCP age 13

“Everybody deserves their own opinion. If everyone was the same, life would be boring! My #HumanRightsDefender shield makes me feel brave & safe. Riding my horse makes me feel free & the flowers represent peace.” Bethany 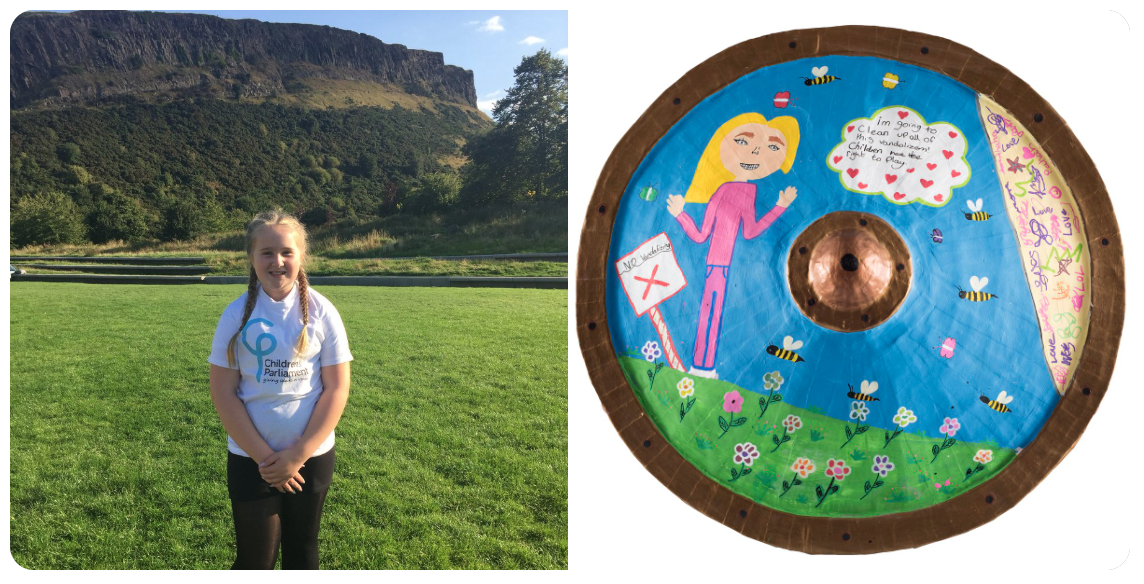 “My shield is about stopping vandalising. Lots of places like parks and schools have bad words on them. It’s not nice for children who spend time there. We have a right to live somewhere nice & safe.” Faith, MCP aged 12 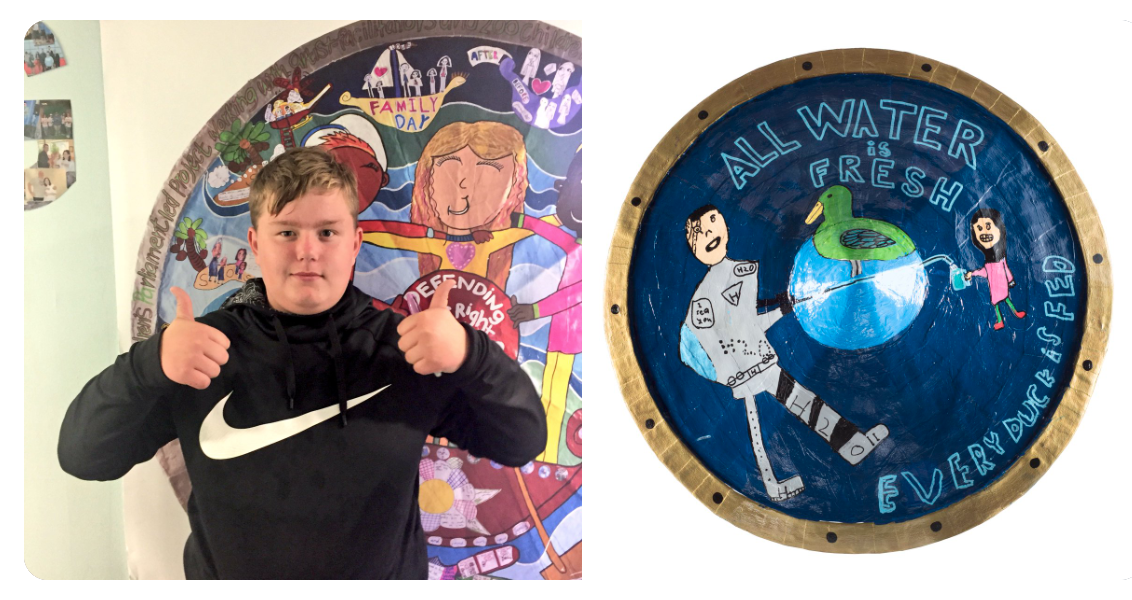 “My shield is about defending our right to clean water. We shouldn’t waste water as some children don’t have access to it at all. Our world needs less litter, less pollution & less plastic.”  Aiden, MCP aged 13.