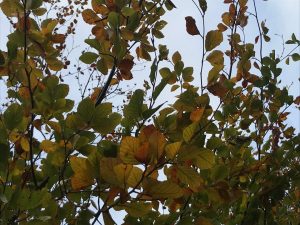 As part of our Situated Communication module, we were given a den building challenge to test our communication skills in the outdoor environment, which was full of rich and engaging stimuli.  Although the end result was far from glorious, our team worked well together and came away with a better understanding of the challenges faced when communicating outside!

Was there a group leader?

I found that there was no established group leader at any point throughout the den building activity.  Everyone took turns to suggest ideas and give instructions/constructive criticism as well as show their initiative when working with others.

How was this chosen?

Seeing as there was no particular group leader, we decided simply to work alongside one another to achieve a common goal within a set time.  To have selected and agreed upon a team leader would not only have wasted time in this context but also could have created an opportunity for resentment or disagreements.  Furthermore, we all chose our own roles within the group without hesitation, and were ready to take on a similar workload, so there wasn’t really a need to have somebody as a leading figure.

If informal, how did you know? What were the actions that marked them as a leader?

Although we had no specific team leader, we all showed leadership qualities and skills within the completion of the activity.  We all made valid suggestions, as well as ensuring that we were managing with what we needed to do (carrying materials, taking turns to arrange the structures). We worked with honesty and integrity, and had the confidence to make further suggestions and raise questions where necessary.  As the task progressed, we found that good verbal communication was key to a collective understanding of the task and a greater chance of success.  Moreover, when time began to run out, we were required to hone our decision-making capabilities to decide which features of the den should take priority, and which features we could afford to miss out.  Despite the cold weather, we also kept each other going!

” As the task progressed, we found that good verbal communication was key to a collective understanding of the task and a greater chance of success.”

How did this impact on the rest of the group e.g. was there some underlying resentment/did anyone feel excluded?

As mentioned above, having no established leader was perhaps fundamental to the absence of any potential resentment in the group.  With regards to exclusion, I found that everyone had a job to do, and we worked together very well with no conflict or disagreement whatsoever.  In fact, the atmosphere was quite relaxed and informal – not to mention we also had a good laugh

What was the most challenging thing for you about working in this group?

Whilst I enjoy working in a group, there are a few factors which I consider a challenge.  Although I had spoken to everyone in my team prior to the task, I felt I wasn’t hugely acquainted with all of our members.  Therefore, I felt the need to establish a relaxed outlook on the task, and be open to different suggestions and strategies which might not have reflected my own.  Furthermore, I can sometimes find it difficult to project my voice and be heard as I consider myself a fairly soft-spoken individual outwith the university context.  If somebody talks over me, I tend to tail off and stay quiet.  I can also fall into the trap of body language and intonation being too subtle for others to notice.  Therefore, it was necessary to challenge myself to step out of my comfort zone and ensure whatever I said could be heard.  It was rather rewarding as a few of the ideas I had were used in the creation of the den. Now I know that by having my voice heard, I can contribute to the completion of tasks.

How clearly did you think the group explained to you?  What made this clear or unclear?

I felt that the group’s explanations were particularly clear – we all made sure to speak clearly and that everybody knew what was expected of them.  This was evident throughout the task as nobody was left confused or without anything to do at any point.  All members understood what had been asked of them, and requests that were made.  There were also no arguments or conflict during the whole activity.

What was the impact of the environment on your communication? What changes did you make when explaining to others that you might not have considered in a typical classroom?

I believe there was a significant impact on communication.  For example, we had to speak much louder than perhaps we would have in a classroom.  Also, we needed to use hand gestures and reliance on facial expressions more often, as background noise, distance and proximity influenced how well we could hear and interpret what was being said by other members of our group.  Given that it was not a particularly windy day, we did not have to raise our voices much, but the difference in volume was obvious compared to the classroom. Furthermore, in the outdoor environment, it often proved useful to use the concrete materials around us to physically demonstrate the ideas and suggestions we had.  This allowed us to visualize what another group member had in mind, which might not always be possible indoors.

“I believe there was a significant impact on communication.  For example, we had to speak much louder than perhaps we would have in a classroom.”

How challenging was it to speak above the sounds in the environment?  How can we make this communication easier on both speaker and listener?

There were a few occasions when the wind picked up, as well as dogs barking and the sound of traffic from the surrounding roads.  I felt that my hearing became a little more strained when this happened.  I also found that I had to speak louder, although not by much as we stayed close together.  I feel that being in smaller groups did make the communication simpler as we did not have to worry about projecting our voices too much, and if we could not hear each other, we simply moved closer together.

Were your negotiations successful? Why/why not?  What was most challenging about these?

Unfortunately, our negotiations were unsuccessful and few in number.  As we were one of the last groups to have access to the materials available, we did not have much to offer in exchange for additional group members or better materials.  I feel that our tone and language was particularly strong and persuasive, but due to the lack of physical materials, a lot of our negotiations and offers fell flat.