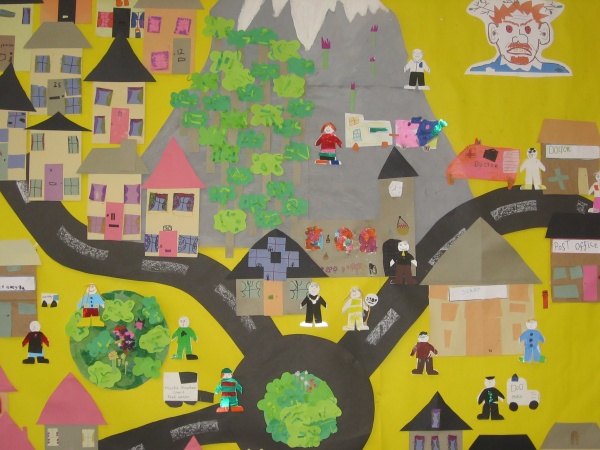 On Friday 30th May, Liz Stephen and Laura Beattie of Deanburn PS celebrated the conclusion of their Giant of Thistle Mountain global citizenship storyline. They have both been part of the first cohort of  Falkirk teachers being trained by the West of Scotland Development in  Education Centre (WOSDEC) to deliver their global citizenship storylines.

All of the teachers who have taken part in this interdisciplinary learning have reported very valuable impact on their pupils. This includes development of pupil understanding of social justice and equality (Why is the giant so unhappy? What can we do to help?), their respect for diversity (Don’t assume the giant is bad because he is loud and scary-looking), and their critical thinking and ability to understand the importance of communities. 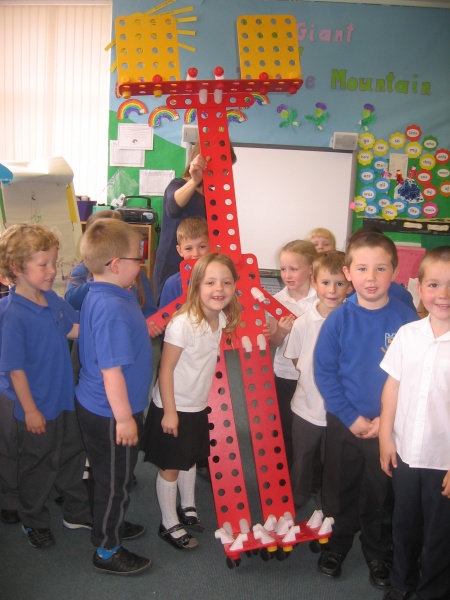 The pupils in Liz Stephen’s primary 1 class greeted fellow pupils, parents and other guests by miming their character role in their imaginary village of Thistle Mountain. They then took their guests on a guided tour of their work throughout the storyline and the frieze and model village they had created. Both classes had created their own giant too.

This storyline bundles a small number of experiences and outcomes from Religious and Moral Education, Health and Well Being and Social Subjects. It skillfully combines active learning experiences with drama interludes where the children are in role and have to deal with very difficult questions and issues. They are taken on a journey which effectively supports them in forming their social attitudes and emotional development. There was lots of evidence of deep understanding of the dangers of stereotyping and the value of co-operation and collaboration to build a succesful community. It was clear from the children’s readiness to take on their character role, that they thoroughly enjoyed the whole experience. (Click here to view a video compilation of the work displayed) 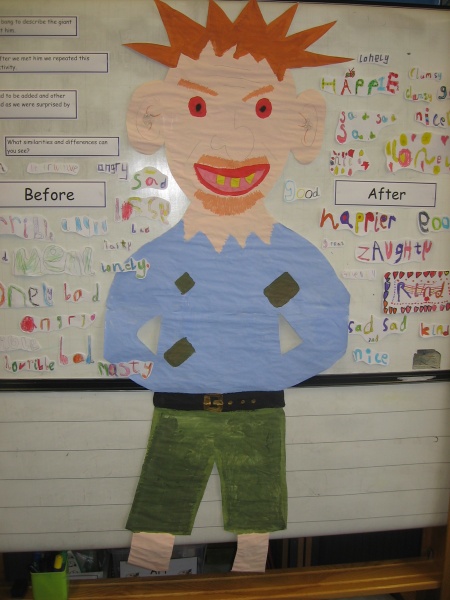 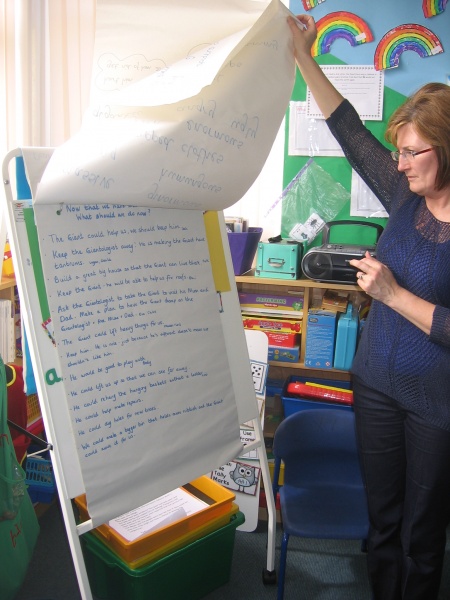 Laura effectively built opportunities for pupils to apply their literacy knowledge and understanding through a before and after “role on the wall” activity. Each class created their own giant and village using their chosen media.

Liz and her class used a flip chart to capture their developing ideas throughout the project, and this was available for parents to view during their visit. It can be very difficult to capture evidence of developing learning during discussion with groups of children, and Liz found this flip chart method worked really well.

Lynne has continued to develop her use of this approach following initial exploration with Yvonne 4 years ago. This year, Lynne’s pupils needed to develop their listening skills in particular, so she tailored the storyline to help pupils progress these. She structured the literacy tasks to allow particular development of note-taking and the associated understanding required to do this well.

The E & Os targeted were 4-05a & 4-09a, and Lynne also integrated significant aspects of learning which she knew the pupils would need to develop for NQ5.

During this lesson, some pupils took on their storyline role as a member of the crew destined to save Earth. They were making themselves available to the world’s press who wanted to find out about their mission to initiate the colonisation of a new and unpolluted planet in order to save human kind. The rest of the pupils were in role as international press reporters from a publication of their choice. The mission director conducted the conference according to protocols observed on the news. Pupils had prepared some initial questions, but readily used their listening and notes to question statements made by the crew. There was strong evidence that pupils were developing questions from their notes and they grew increasingly skilled and direct in building on the answers of the crew. Their questions showed that they were an informed audience with deep concerns over issues around the mission, and they were increasingly probing in pursuing satisfactory answers. 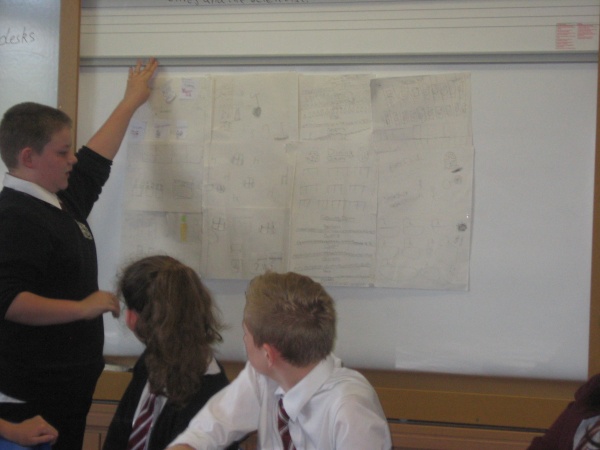 The pilot of the mission crew got a particular grilling about his lack of English and any communication issues this might cause during the journey – particularly if anything went wrong. The agriculturalist was confident that he had all of the requirements to grow food once they arrived on planet Tenalp Wen, but was a bit miffed that he couldn’t bring his dog and house it with the other beasts in the special hold. The scientist, medical officer, chief of security and supplies expert were also confident that they could fulfil their roles. Pupils were very able to apply their drama improvisation skills in conjunction with their listening to help them understand and respond. The crew answered well and increased in confidence visibly. They were able to sustain their roles with ease and all pupils made good use of factual and inferential information. 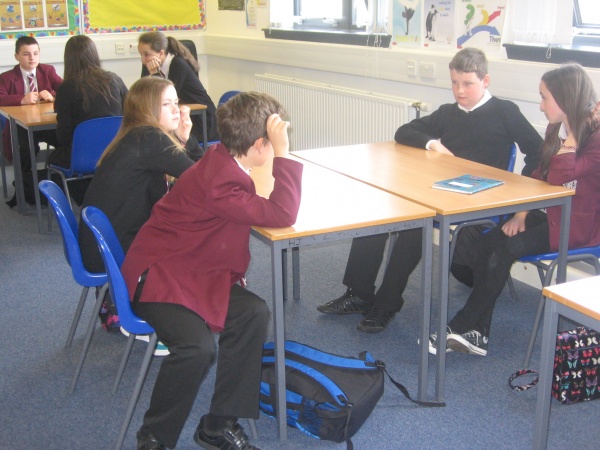 Following the press conference, pupils came out of role and were asked to pretend that lift off had happened, and the mission was now in progress. Lynne showed a video of life in the international space station during which pupils had to prepare to answer the following questions:

What is the purpose of this film (text)?  Who is the audience for the Film?

What did you learning about the environment? What surprised you about living in space?

Lynne paused the video to give pupils a chance to capture relevant notes before viewing the next section.

Lynne’s use of storyline has enabled her pupils to develop specific literacy skills within an engaging context. The storyline approach ensured that pupil voice/personalisation and choice was embedded in this work. Pupils were able to apply science knowledge and understanding through the context. They were also able to apply their drama and art & design skills in the development of their characters, setting, and the plot of their story. 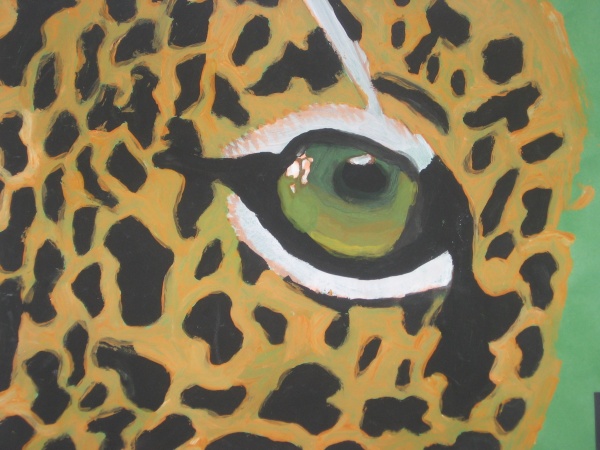 The Falkirk Primary Schools Art & Design exhibition took place in the second week of March and was a stunning show. It was expertly hung by the art & design specialist teachers to showcase the range of teaching and learning taking place within their subject. As can be seen from the exhibits shown, pupils have developed a plethora of skills using 2 and 3 dimensional media and techniques. Therefore, the discrete learning which has taken place is securely linked to the experiences and outcomes for art and design and provides a “presentation” opportunity for the wider expressive arts principles and practices.  In addition, the 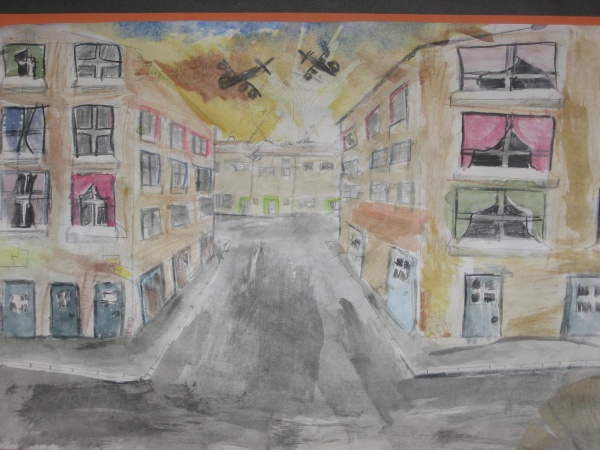 exhibition  demonstrates how  specialist teachers delivered type 1 interdisciplinary learning by linking effectively to another areas of the curriculum. This is often termed “learning through” and is a great strength of expressive arts subjects.

The exhibition showed examples of art work which had been creatively planned to be done co-operatively by groups of pupils. Click here to view. 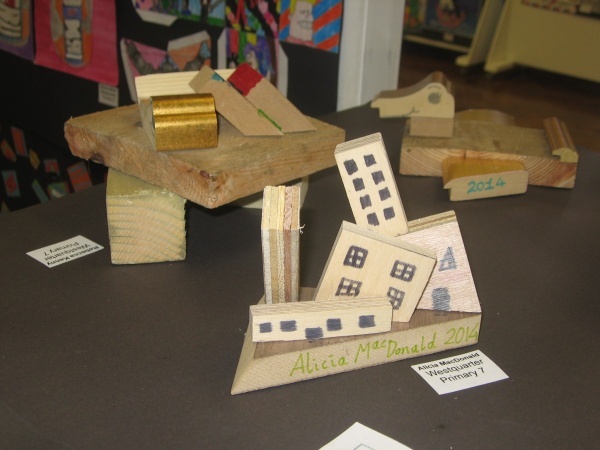 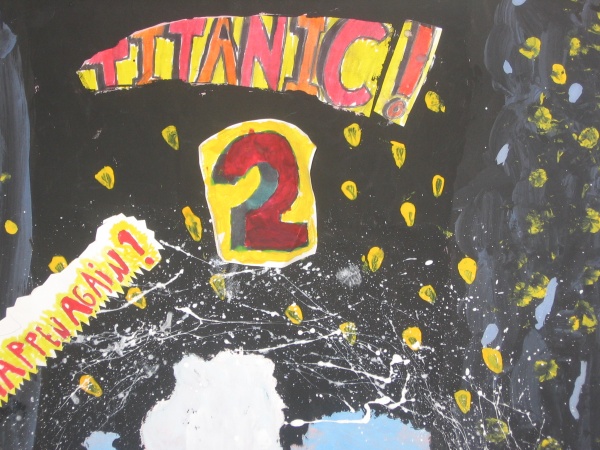 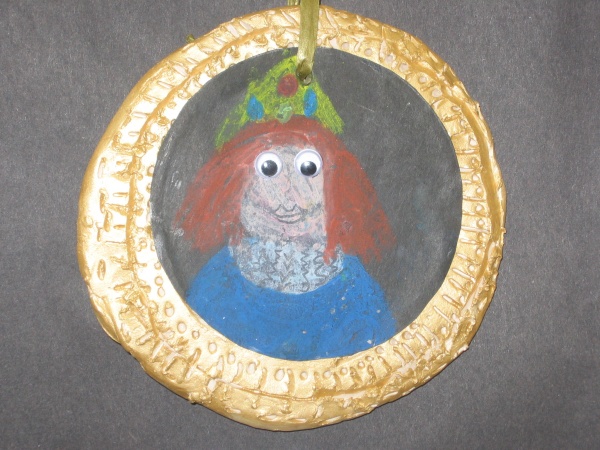