With regulations prohibiting wild camping in Scotland, getting our Duke of Edinburgh groups out on their expeditions wasn’t feasible at the start of the summer. However the easing of some lockdown rules meant that we were allowed to get out and camp from the 15th of July onwards. With wild camping now being allowed, we were able to get one of our DofE groups out for their Silver Qualifying expedition on Wednesday 15th July.

Although we were allowed out, there were specific hygiene measures we had to have in place in order to make the expedition happen. Each group member had their own hand-sanitiser handy, some sort of soap, and a face covering which was easy to grab if necessary. Both areas where we camped were accessible by vehicle which meant that handwashing stations were easily facilitated. Dail mòr, where we camped the first night, had open toilets with running water which made washing things like stoves and hands very easy. The second night, in Shawbost, there was a handwashing station set up using a big container which had a tap to allow access to running water. 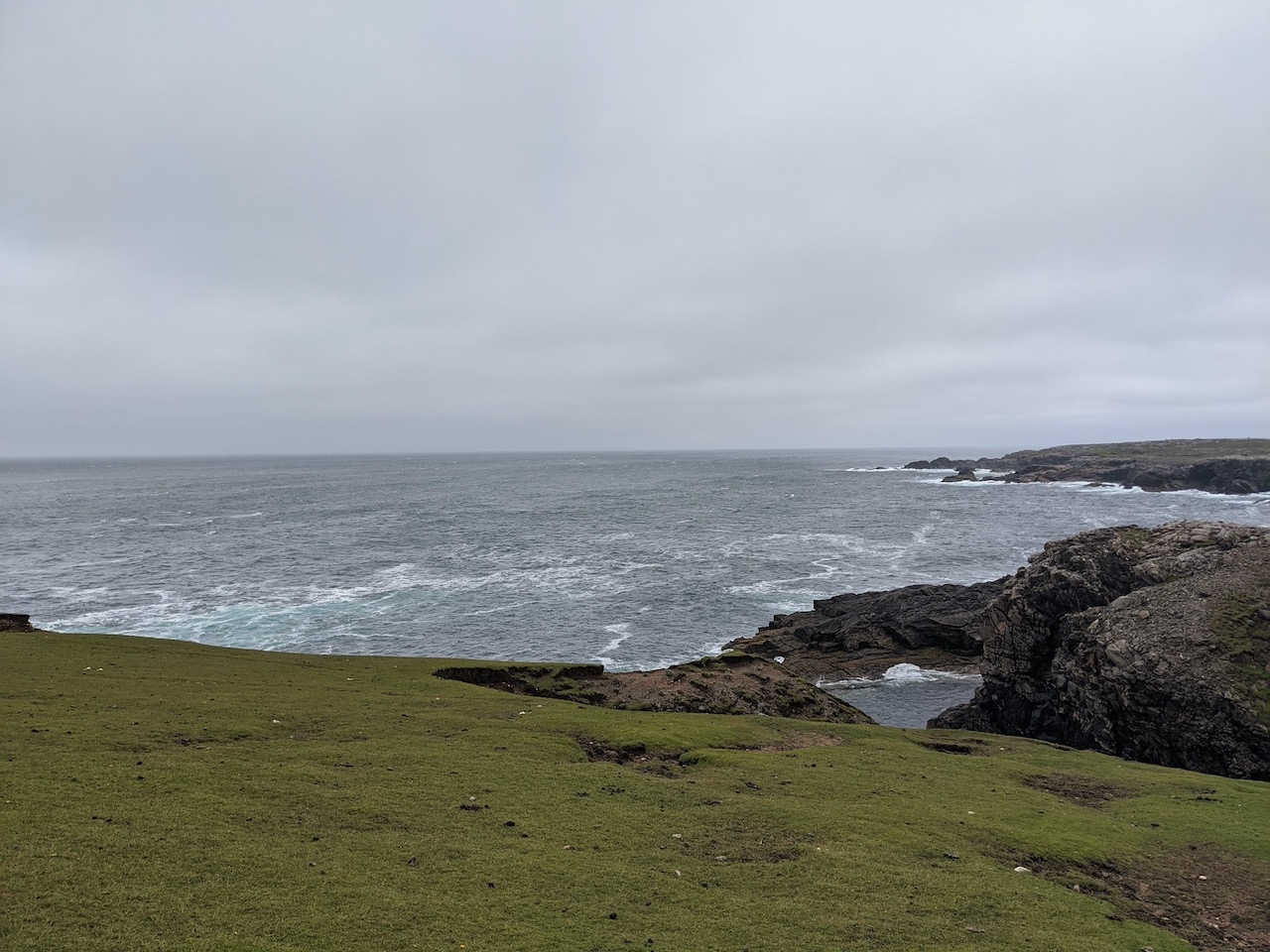 Social distancing measures meant that we had to change the way we shared out the kit. Where previously there would have been two or three people sharing a tent and stove, it now had to be one tent and one stove per person. Instead of the group being able to split parts of the kit up – tent, poles, stove – to lighten the load between them, our group had the opportunity to put a couple of things in an overnight bag that would stay in the van. They opted to leave tents and a change of clothes in the bag, and carried everything else with them as they walked. Changing the way we did this, to comply with social distancing, didn’t make the expedition any easier, just a little different to how we would previously have split up kit. 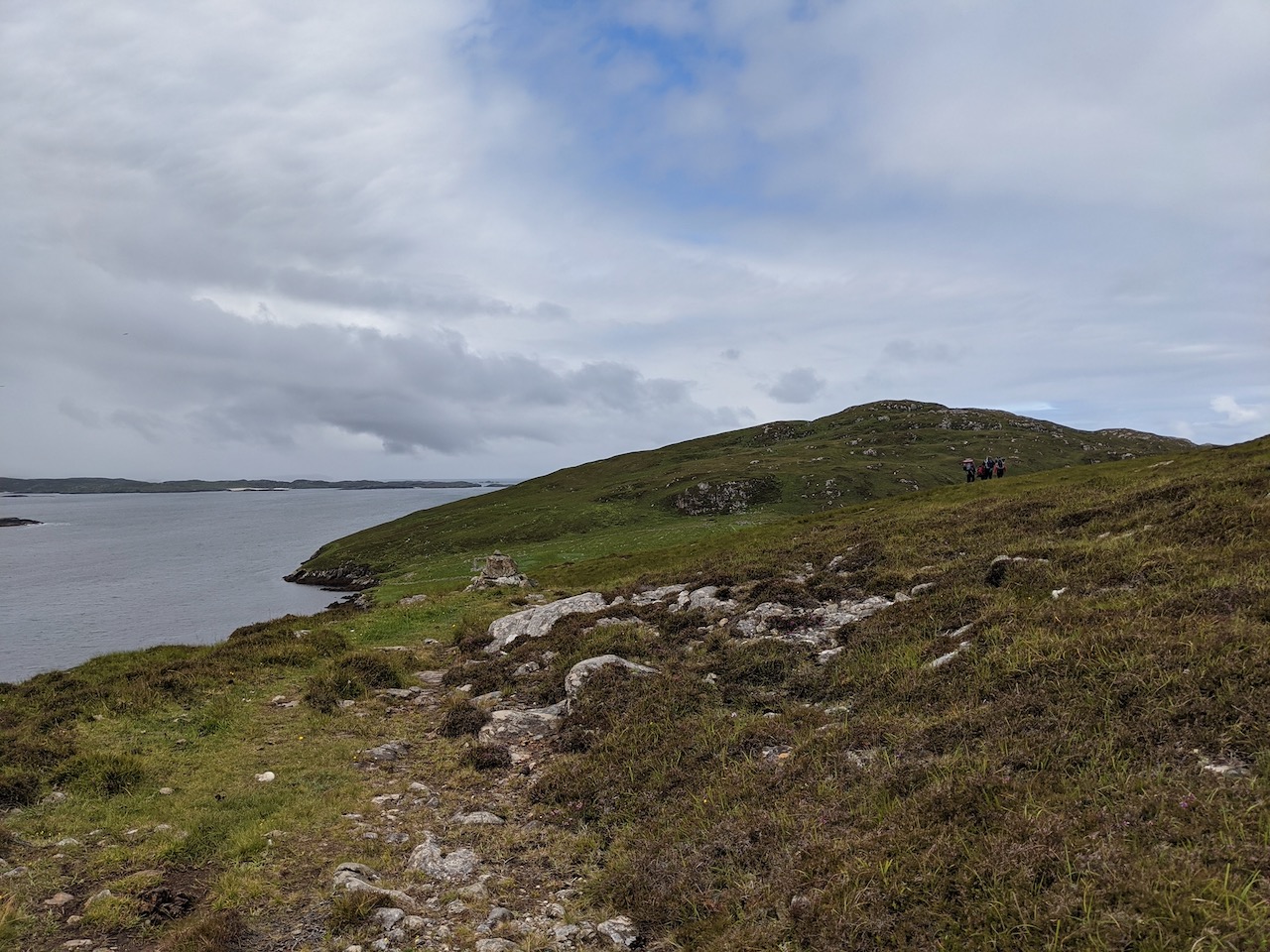 The expedition started in Borrowston, where the group navigated around the headland and went up north towards the Gearranan Blackhouse village. The ground was nice and dry, and with the Wednesday being quite warm and dry the group was able to enjoy their breaks and take their time whilst enjoying the views along the coast. 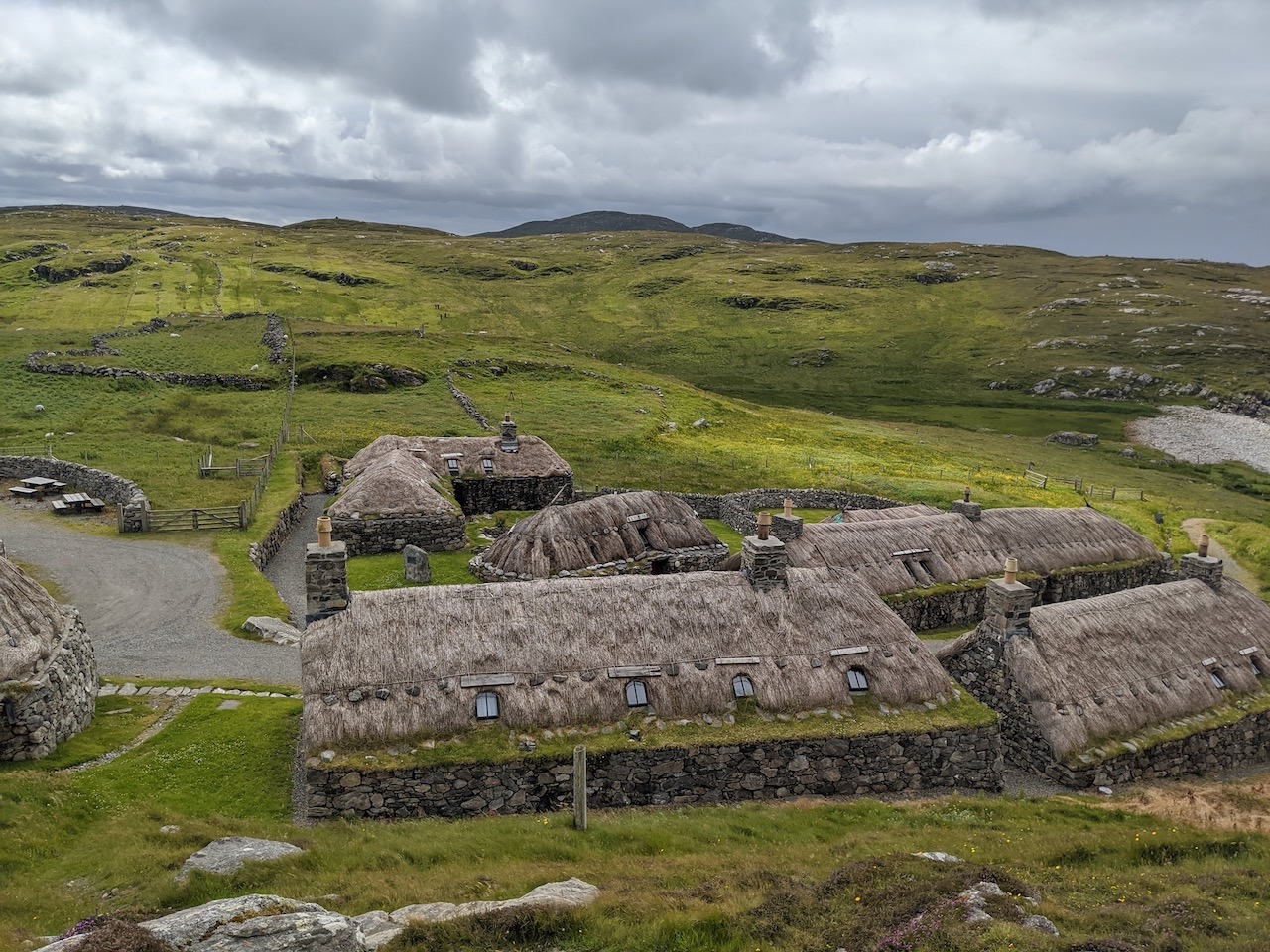 From Gearranan it was a march to Dail Mòr beach. Dail Mòr was where the group had planned to camp on the first night of the expedition. With the cliffs around the beach being so steep, there was a nice sheltered spot to pitch the tents. 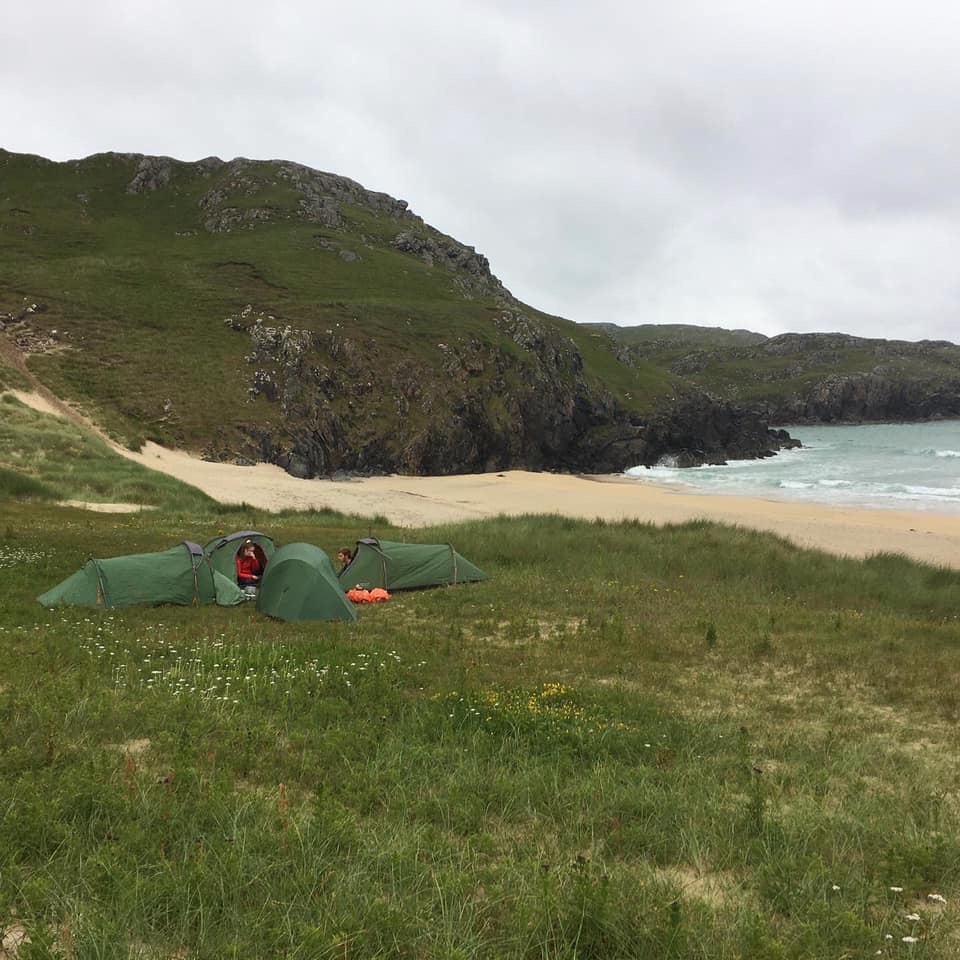 The group chose to pitch their tents in a circle facing each other, so that they were able to have conversations whilst maintaining good physical distance from each other. Later on in the evening they had a fire on the beach, while the weather was still nice as the forecast was looking a bit wetter for the rest of the expedition. 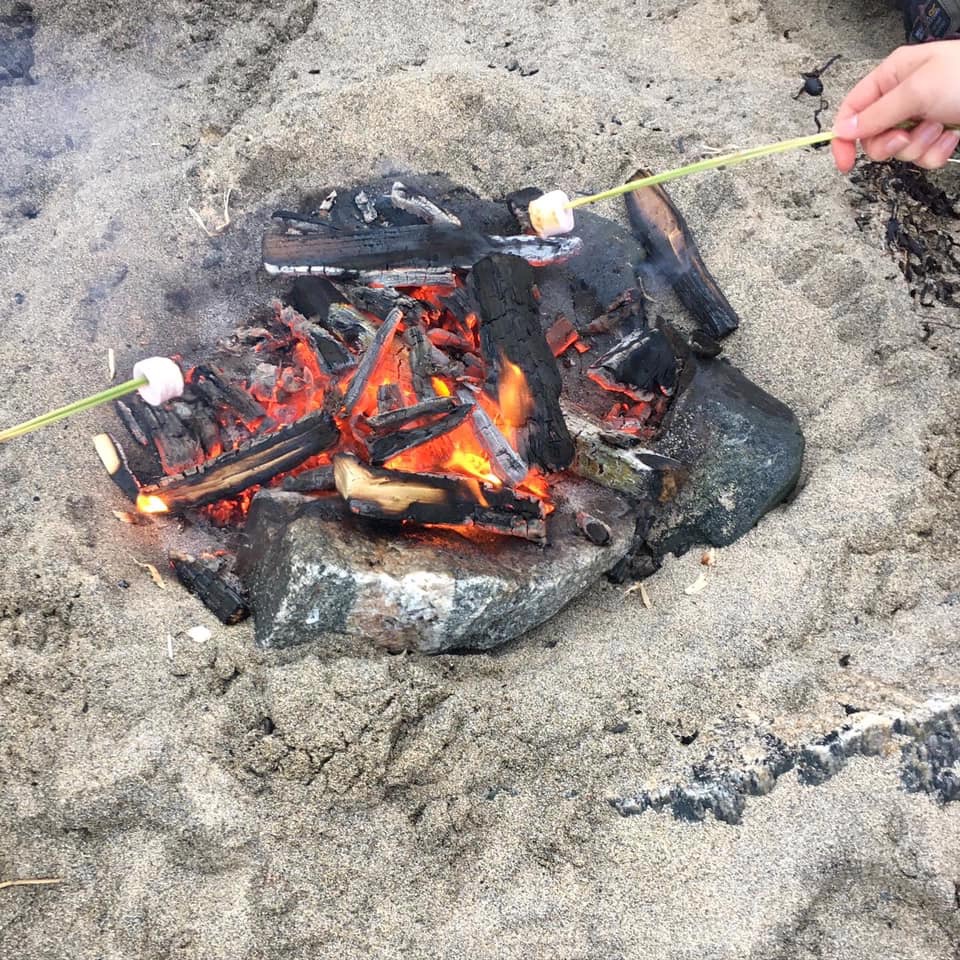 When there aren’t any skewers on hand, long blades of maram grass seem to do the trick for toasting marshmallows?!

The weather was definitely wetter on the second day so the group didn’t take as many stops along the way.  They were in Shawbost ready to set up camp by mid afternoon on Thursday. 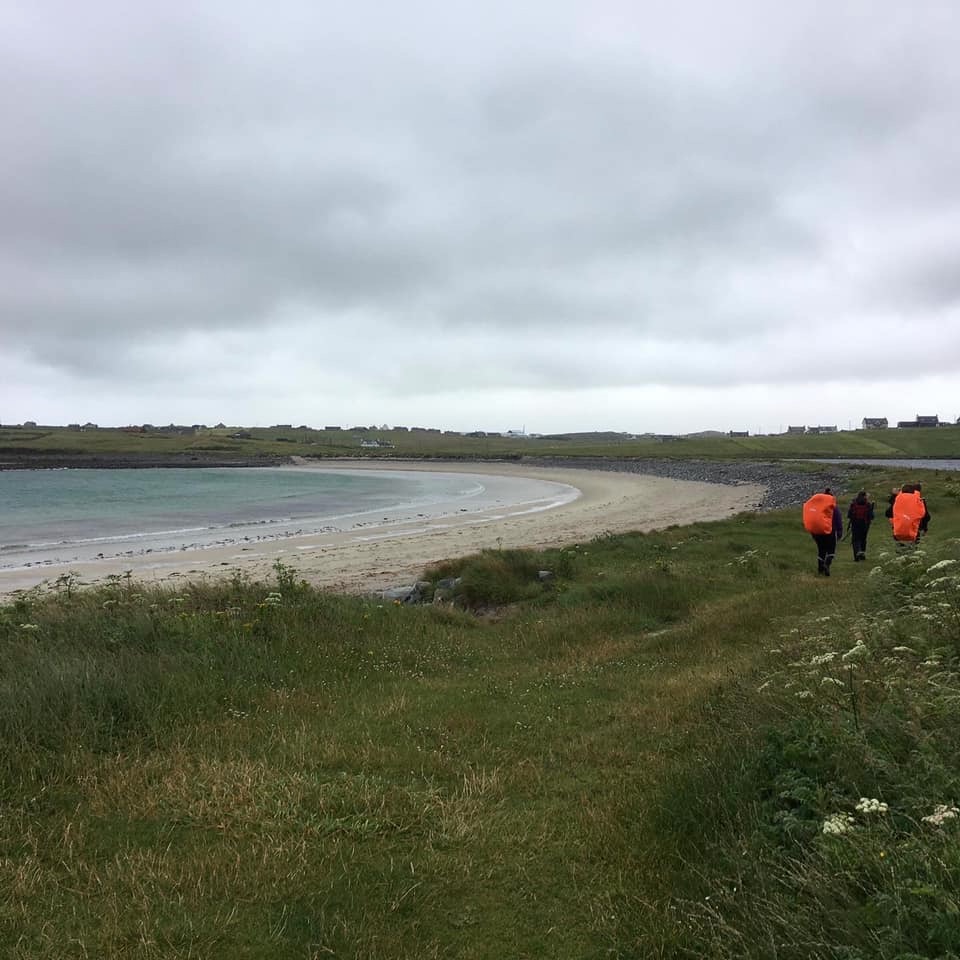 The beach where they camped was more exposed than the previous evening, so they made a sensible decision to pitch behind some long grass which gave them a bit of a wind break. We were told by someone local to keep an ear out in the late evening/early morning as there were a family of otters that lived in the area. We didn’t see any but they were very noisy in the wee hours of Friday. The weather was a bit wild on Thursday evening so the group spent their time mostly inside their tents, but were able to cook their dinners outside when there was a break in the rain. There was plenty of time to chill out and enjoy the beach, with some of the young people taking evening strolls along the sand.

Friday morning was drier than the previous day so packing up and getting ready was pretty faff-free. The group were ready to finish the expedition and get home. 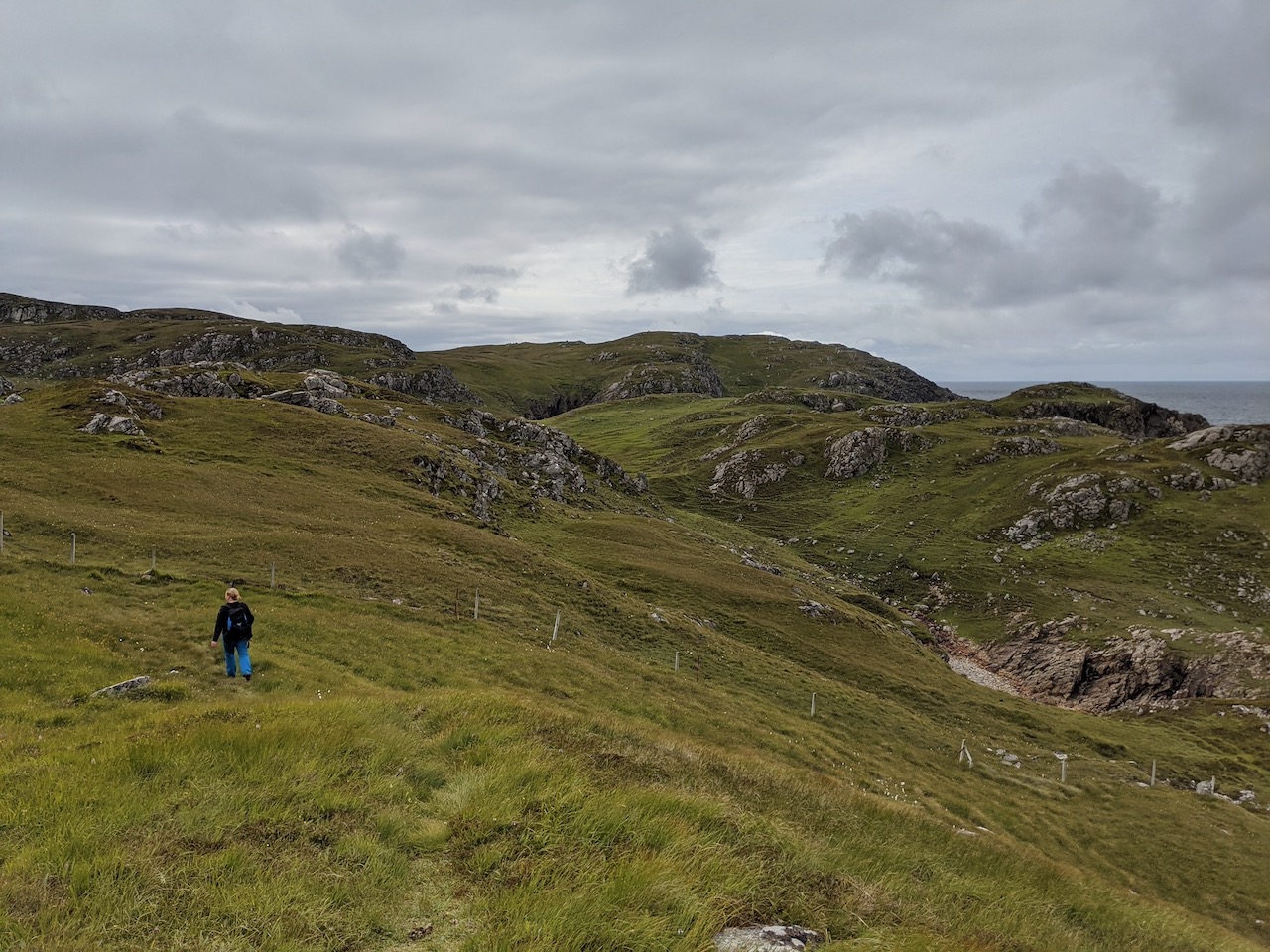 The third and final day was a walk from Shawbost beach round to Arnol Blackhouse, where they’d be picked up by their lifts home. The coast had flattened out so this was the easiest day of walking, which combined with the thought of a hot shower, kept group spirits up! 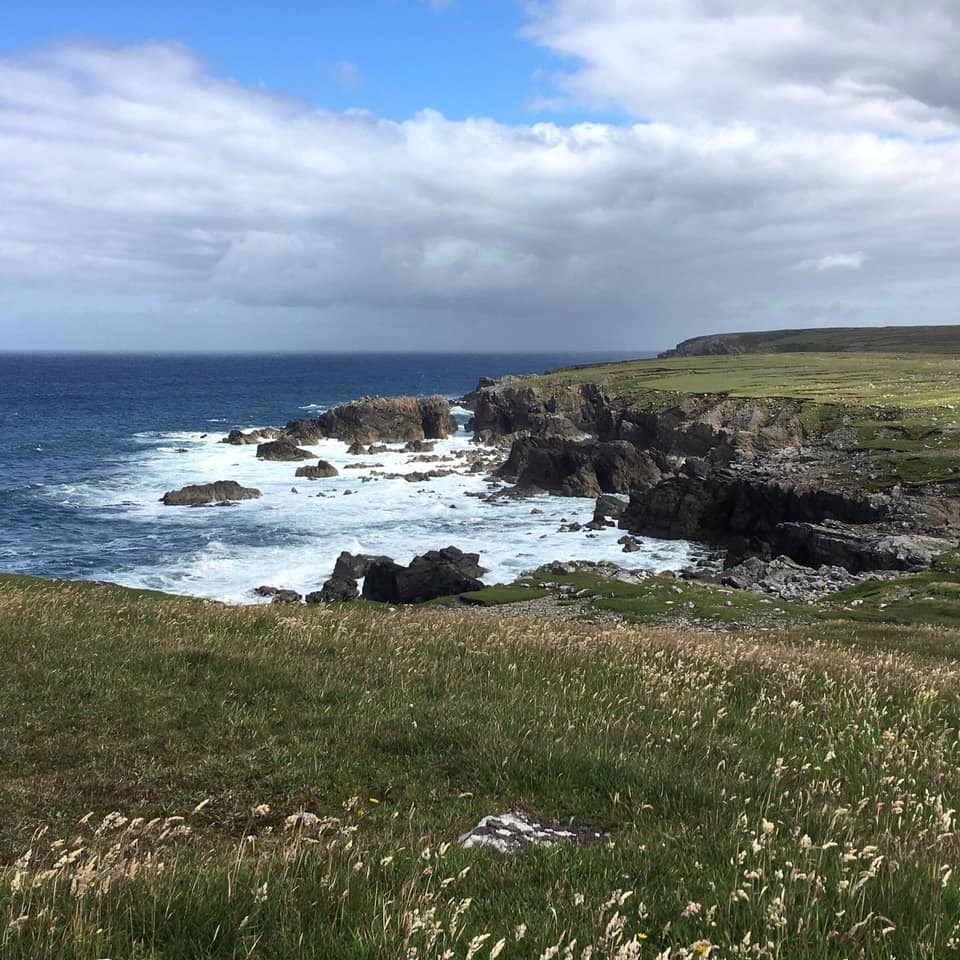 With views like this throughout the expedition, the walk up to the Arnol blackhouse was very scenic. Once they’d finally reached the last checkpoint, they all had lifts waiting for them. Each member of the group had someone who was able to come over and pick them up, which made social distance compliance easy from the start of the expedition to the finish. The route was challenging, especially after the many weeks of lockdown they’ve sat through. The group were excited to get out on an expedition and it felt relatively ‘normal’ despite the changes..

The key things learnt from the expedition were that with a small and competent group on their silver qualifying expedition, the measures to keep us all ‘covid-safe’ were fairly straightforward to implement. The expedition ran smoothly, and we were able to manage social distance and hygiene measures in a safe and positive way.

Following the success of this expedition, we’re looking forward to getting more of our other DofE groups out on expedition in the near future! We just need to figure out the logistics of group transport now, so we can take out young people who are not in the fortunate position of being able to access a parental taxi ride! 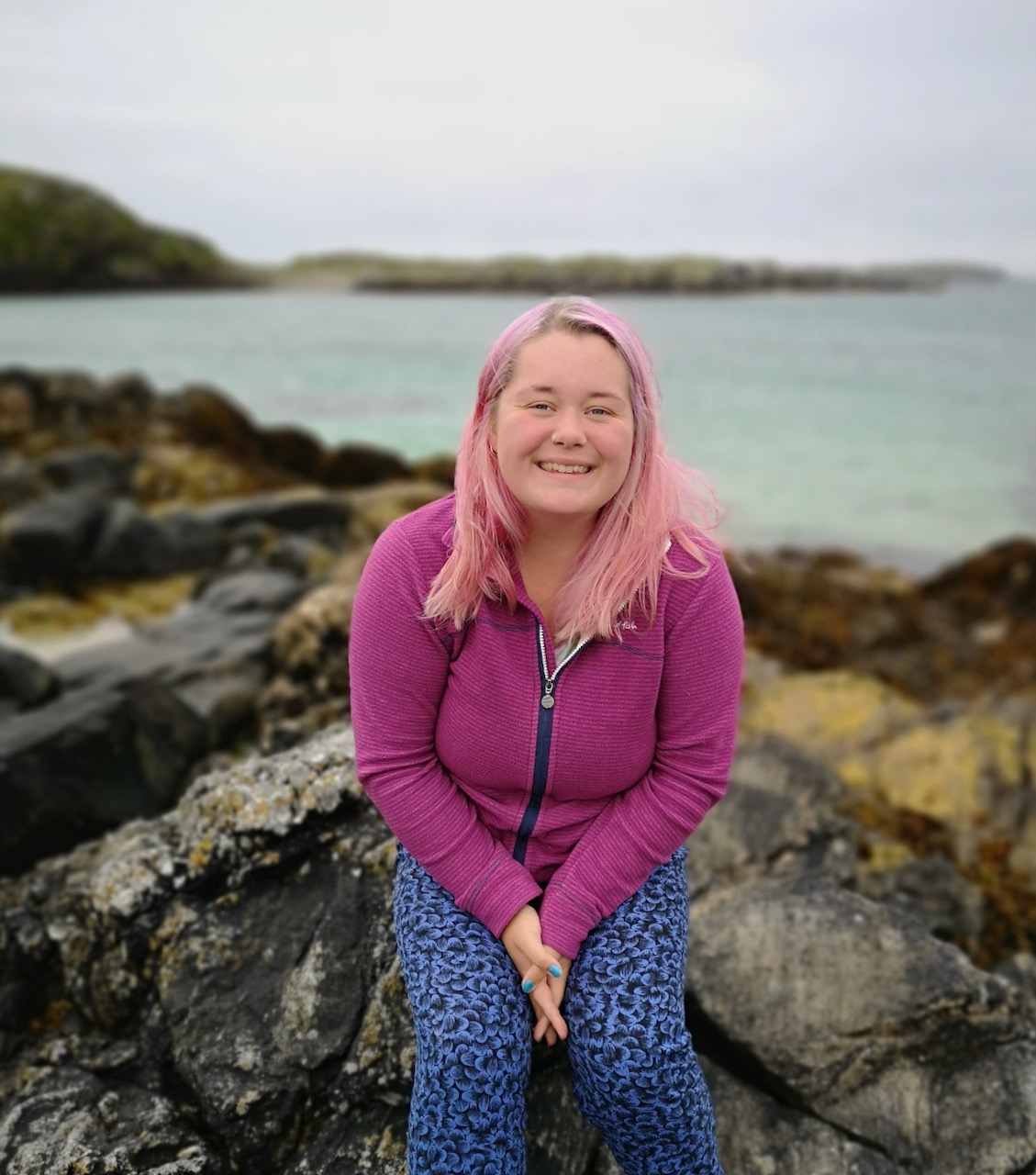 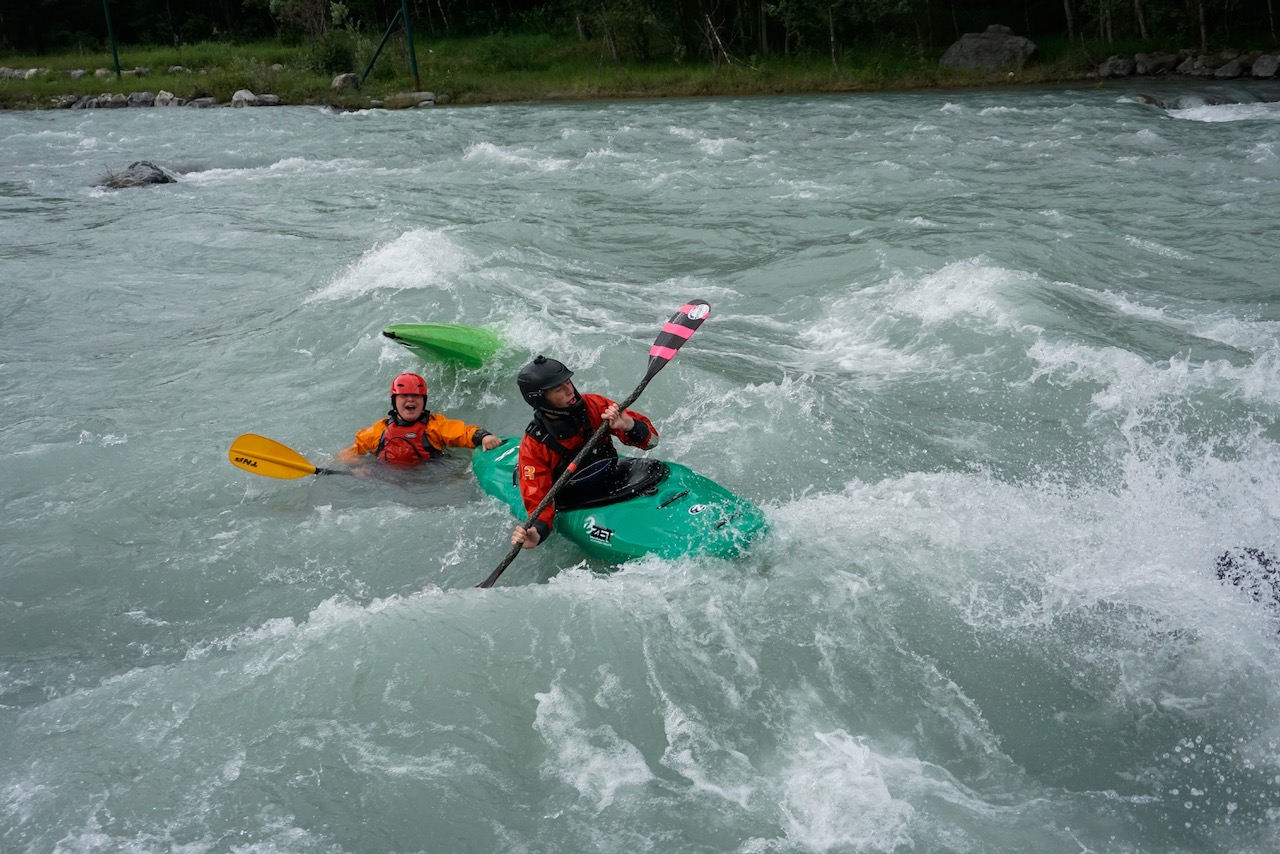 I’m Koren Pickering and I’m going to be working in the Outdoor Learning team with Isi and Tim until September. I’m a fluent Gaelic speaker and an outdoor instructor as well, so I’m here to help with anything Gaelic over the summer.

My post has been funded by Bòrd na Gàidhlig , the original plan was to help develop the summer activities in Gaelic medium but with the global pandemic I have trying to develop other parts of what the Outdoor Learning team deliver.

I’m studying Celtic Studies at the University of Edinburgh, and I’m very interested  in the links Gaelic has with our environment and landscape. I plan on using this opportunity to help develop Gaelic Outdoor Learning in the Islands as a start. At the moment I’m working on creating new Gaelic Outdoor resources which can be used by people at home with their own families, or by people who are working with young people. I am also giving Gaelic lessons to some of the Outdoor team. I was asked by the Scottish Advisory Panel for Outdoor Education (SAPOE)  to translate their statement on how Outdoor Learning can be used to help with educational recovery from the Covid-19 epidemic. The statement is here-

I do a lot of outdoor swimming, particularly in the sea. I also kayak in the sea around the islands and rivers in the Highlands when I’m based in Edinburgh with the University Canoe Club. I’ve spent time a bit of time kayaking in the French Alps as well. I enjoy sailing when the opportunity arises.

I’m looking forward  to being  a part of the team and to be able to work in the Gaelic Outdoors.

Beetroot is easy enough to grow in the garden, and it’s a solid favourite of ours! Your 5-a-day are important, beetroot is tasty and good for you. You can use it in soups, cakes, roast them or put them in salads. I personally like to stick some beetroot on a lollipop stick and eat it like a lollipop.

They’re great veg to grow with kids because the seeds are quite big and so it’s not too fiddly for little hands. They grow best in slightly sandy earth, but they do well in any type of soil. For example, if your soil is a little too acidic, a little lime through it should balance it out. Beets grow best when there aren’t other plants right next to them so make sure it has a little room around it to grow. You don’t even need to plant beetroot in a plot, they’ll grow well in a tub or container of some sort! 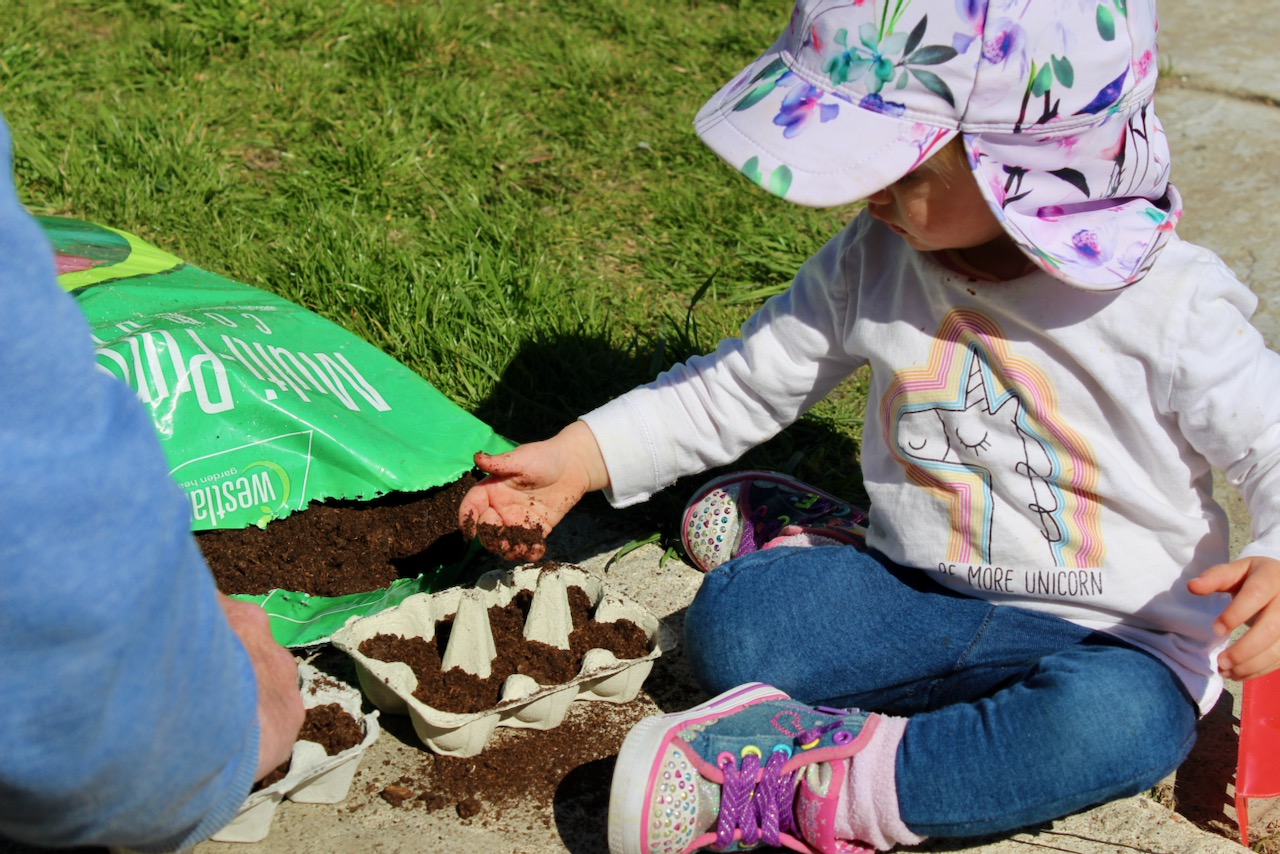 If you want the young people you’re helping in the garden to be encouraged, beetroot is a good choice of vegetable for this. It’s easy enough to plant, and it grows easily a lot of the time. There is usually a little bit of time before you start to see it breaking through, but don’t worry as it will still be growing. They take a bit of time to germinate, even if you can’t see them.

We used egg-boxes to start them off in. We chose these so that we could plant them into the ground if we wanted to, however if you don’t have the space to be able to plant them in the ground a reasonably sized container will do. Firstly we put some earth in each little section of the boxes. Little hands will certainly help with this! 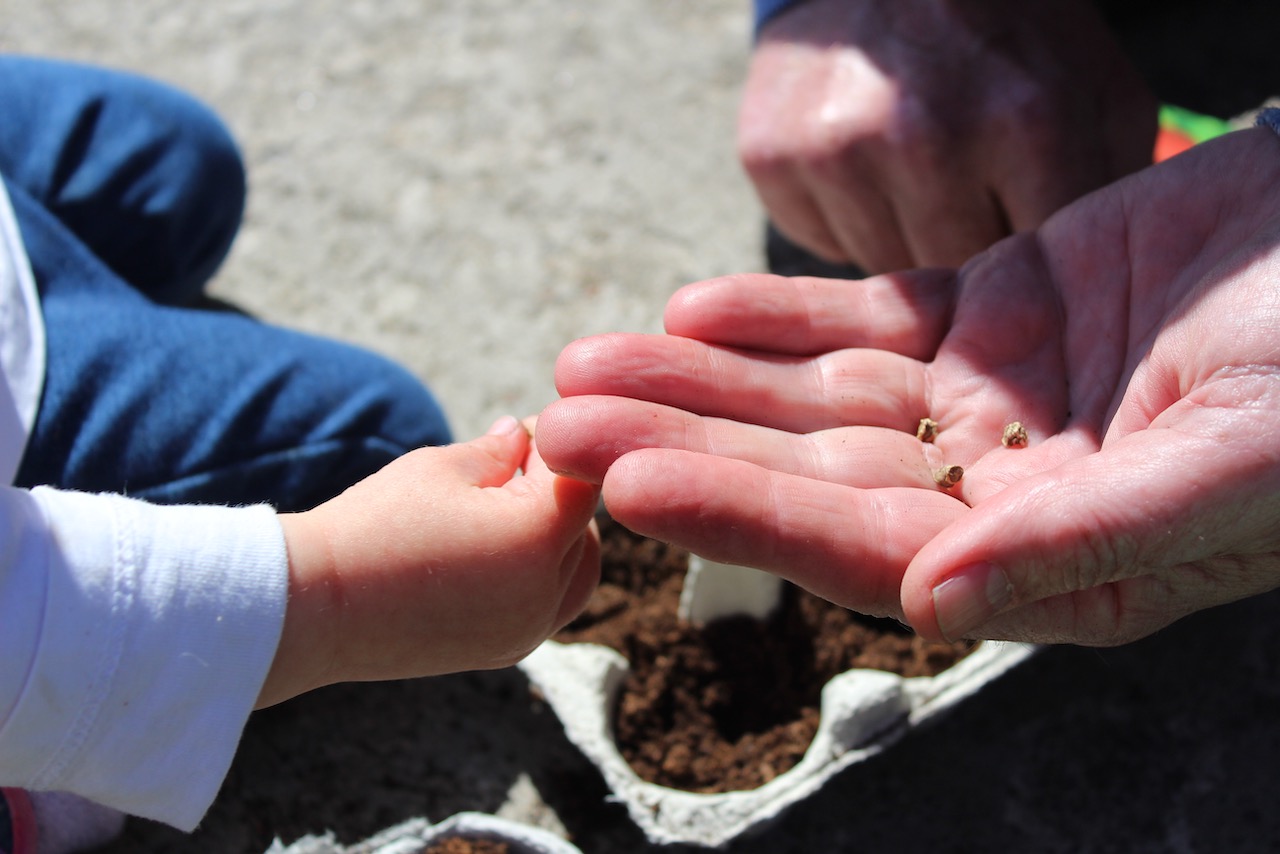 As you can see here, beetroot seeds are big enough that little hands won’t have a problem picking them up here. You need one seed per egg divot. Put the seeds in the middle and press it down into the soil, before covering it with more soil. Your helper will be able to do this without a problem! 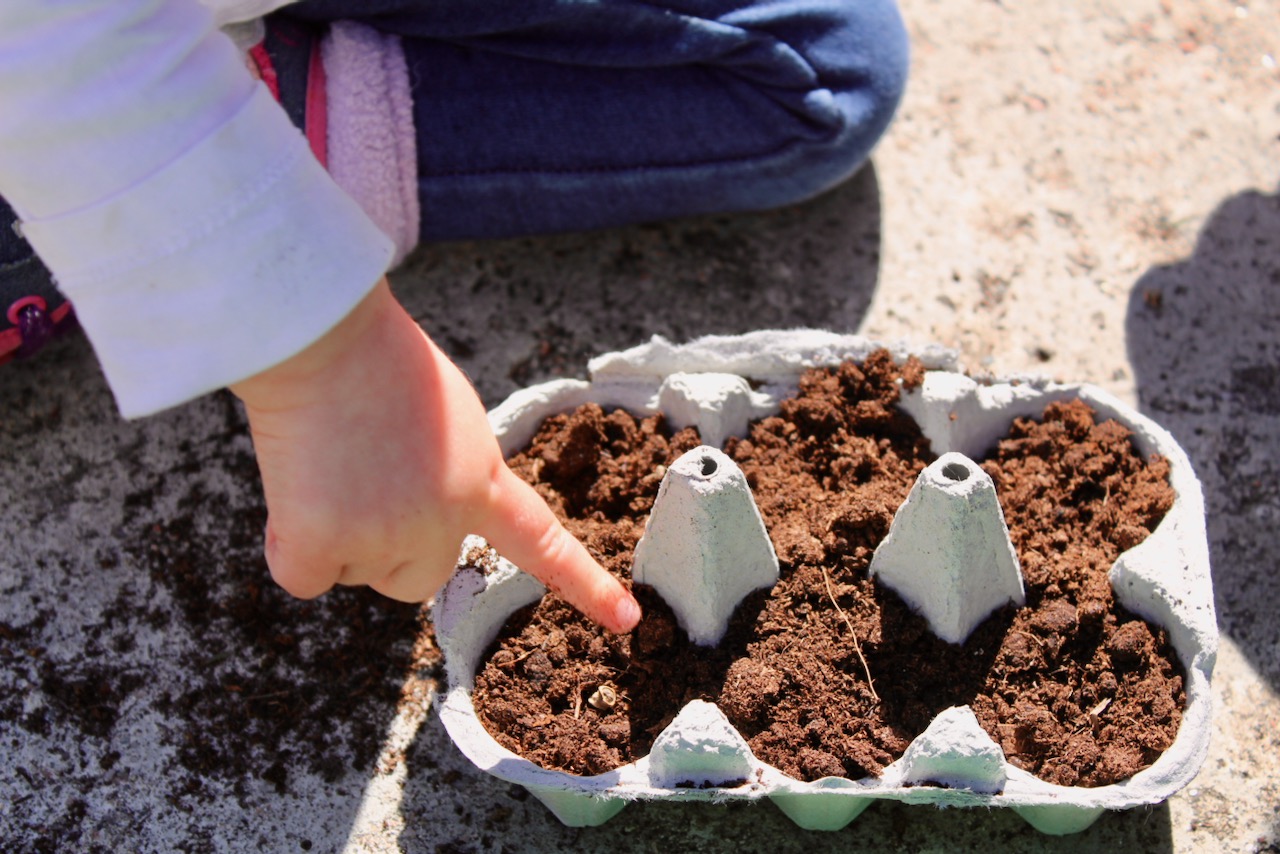 Your beets should germinate within 14 days, and you  might start to see, at the earliest, sprouts from the third day . Make sure you water these at least twice a week so they don’t dry out! When your beetroots begin to sprout you will start to see little purple shoots. 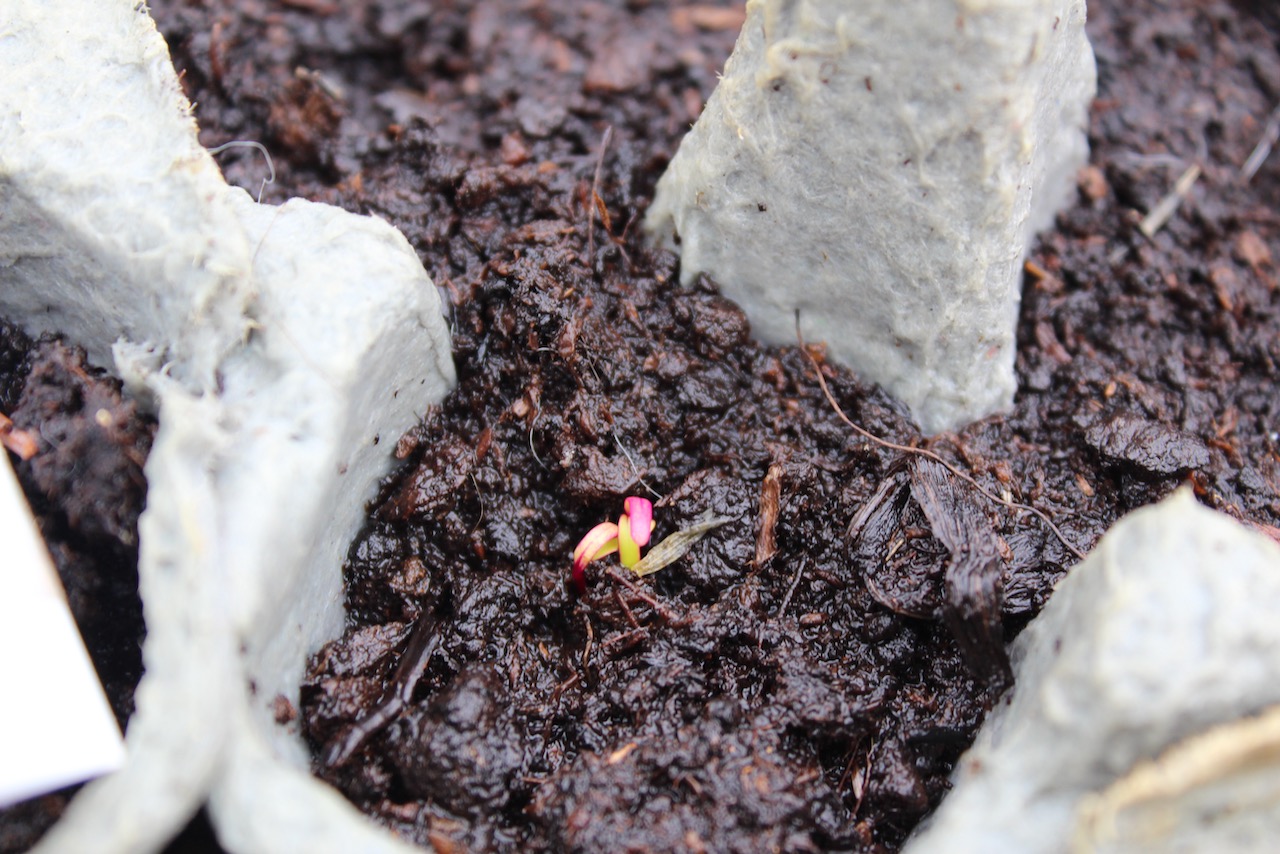 Around then, it’s a good idea to move your beetroots to somewhere with a  more room. For example, if you have a little garden space. Cut up your egg boxes and plant them in a little pre-dug plot. If you don’t have the garden space available, a big box will work just as well! The egg boxes will break down as they’re biodegradable anyway. 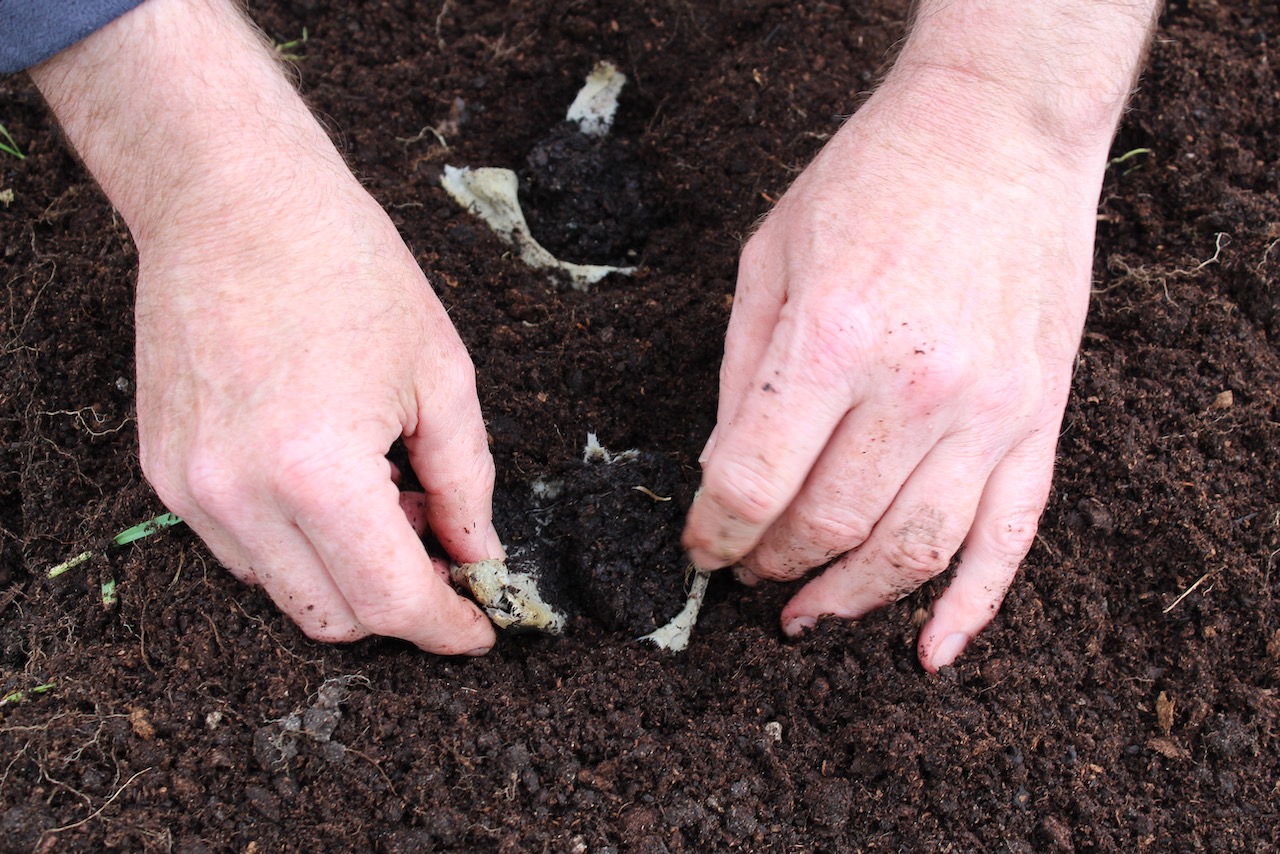 With this done, all you have to do is keep your beetroot watered and to watch them grow over time.

Then when they are ready it is time to cook them and make lollipops.

The Scottish Advisory Panel for Outdoor Education have tried to collate some resources into one place to help you with Outdoor Learning.

Hopefully you will find some useful ideas and fun things to do on the different pages.

The team are always interested in new ways of understanding, so when they found this page we felt it was worth sharing. It is a great graphical way of understanding how  pandemic works, what this mythical R number is everyone is talking about and to help us see a way forwards.

What Happens Next?
COVID-19 Futures, Explained With Playable Simulations