On Wednesday 24th of May we had our Day for Change and it was a huge success!! We raised an even number of £160 which a charity called Nutrition have said that for every pound raised they will double it which means we have raised £320. This means our money will be able to train two nurses to look after malnourished children. Also we can provided four malnourished children with life saving food for five days.

On the day we had an assembly to explain Day for Change and to raise awareness of the malnourished children in Liberia. There was a cake sale at break time and the cakes sold like hot cakes!!!! We wrote Day for Change in chalk on the hall floor and covered it in coins. We paid £1 to dress down or in blue and had a guess how much money in the jar, which Meah won.

Thank you so much for helping us raise this amount and it will make a difference in these young children’s lives. 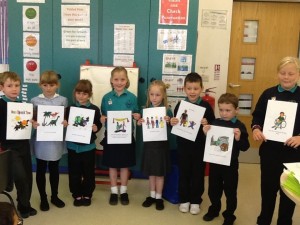 The Rights Respecting Committee were learning about UNICEF’s Rights of the Child today. They had to complete a  Focus Group questionnaire but also had time to colour pictures to go on our wall display. Look out for updated display later in the week. 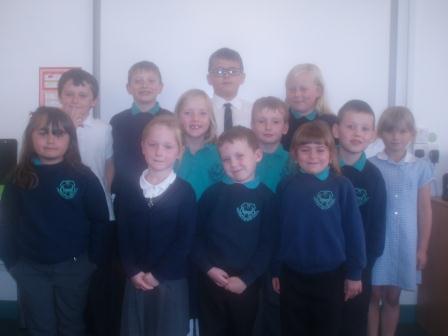 Pupils in Primary 1/2/3 did not take long to settle back into the swing of school life. P2/3 have been helping the new Primary 1’s to learn the class routines and get organised to start learning. Our first topic this term is “Caring World” and children have listened to the story “Oi, Get off our train” by John Burningham. The pupils quickly became interested in the topic and thinking about how we can help to make the world more caring.

We worked together to create a Class Charter to help our classroom become a caring classroom. We then worked collaboratively in pairs to make posters to illustrate the rules.

The purpose of this blog is to enhance communication and provide an insight into the learning and teaching that is taking part within our school! We hope you find the blog useful!