This morning we played outside, mainly on the bikes and on the pirate ship. Afterwards, we sang songs about the number 5, including Five Current Buns, Five Little Speckled Frogs and Five Little Ducks.

In the afternoon, several children shared the iPad, using the timer to know when it was the next person’s turn. We had time in the hall so we did drama. We were pretending to be different mini beasts, including butterflies, centipedes, frogs and bees. As well as thinking about how they’d move, we had to think about the noises they would make.

The sun shone for us today so most of the morning and afternoon was spent outside playing in the garden. More potatoes were found which was a surprise! There was a lot of time spent in the sand tray digging for treasure and the pirate ships, large and small, led to lots of imaginative play.

In the afternoon, most of the children painted a self-portrait so these are now on display ready for all to see. We read stories together in small groups then as a large group, we sang action songs including A Sailor went to Sea and Incy Wincy Spider.

Today the morning children loved our new Pirate theme. We played in a pirate ship and went on a journey to Neverland. We looked for pirate treasure using a map.

In the afternoon, the children enjoyed exploring the garden and finding the different animals and insects which live there using magnifying glasses. Some children planted bulbs in pots they decorated themselves. We sang Incy Wincy Spider and read the story of The Very Hungry Caterpillar.

Today some children used a mirror to study their faces then painted self portraits. These fabulous pictures will be on display for all to see later this week.

There was a lot of singing today! Ducks in the water tray inspired singing Five Little Ducks and the pea pods picked yesterday led us to sing Five Little Peas in a Peapod Pressed. Both of the songs helped us count to five.

The sun was shining today so we spent much of the day playing outside! For snack, the children enjoyed the leek and potato soup that they made yesterday. Delicious. The hospital corner was popular today, with many patients being treated throughout the day.

Well done to our pre – school AM children who are all ready to join P1/2/3 next session.  We wish you all the best in your Primary 1 Adventure!! 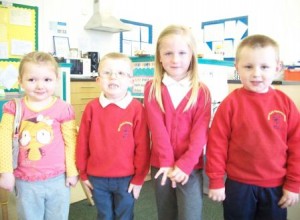 The purpose of this blog is to enhance communication and provide an insight into the learning and teaching that is taking part within our school! We hope you find the blog useful!