We’ve been busy practising the songs for our Nativity. To help to learn the songs at home too you can listen to short clips here:

West Lothian Sumdog Challenge is on!!! P2-7 have the chance to try to be the top scoring Maths class/individuals in West Lothian by logging in to Sumdog and playing games to improve their mental maths skills. Good luck all!! (P4 currently in 3rd place)

NB – Classes need 10 players to complete 100 questions to qualify. Remember it’s all about accuracy rather than speed too!

Primary 3 – 7 had a brilliant morning watching a performance of Jason and the Argonauts with Theatres in Schools.

Safiyyah – I liked when both of them were ‘fighting’ in slow motion.

Harry – I liked it when they opened the boat up. It was exciting!

Sairah – I liked the part when he met the princess, especially when he slapped his hand away when he went to hold it and said ‘not on the first date!!’.

Xavier – I liked when he always talked about Spiderman.

Zoe – I learned that you can push yourself a little bit further.

Mia – I learned that you need to include people.

Poppy – I learned that everything in life isn’t easy to do.

Zahra – I liked the part when he was persevering in going forward rather than going home.

Deeksha – I liked it when he got the gold cape and the crown.

Willow – I liked that the characters never gave up.

Elsa – I liked the part when they were getting the golden cape and there was a dragon.

Primary 4 have been very busy learning about the Vikings and preparing for our upcoming Parent Assembly (8th December).

Primary 7 have been learning how to calculate duration and distances per second using lots of different activities and resources. They can now confidently time an activity using a stop clock or iPad timer and use these results to calculate more answers to problems. 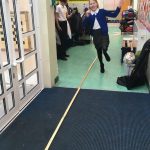 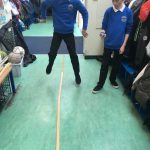 P7 have had a fantastic morning at JYHS learning German and finding out about the culture and landmarks of Berlin. Fantastic teamwork, terrific S1 and S6 leaders and a wonderful learning experience!

The Nursery boys and girls had a great time this morning taking part in a Yoga session about Minecraft. Yoga is a great way to exercise our bodies and minds. You can try some out at www.cosmickids.com or have a look at some of our fabulous work here:

We had a fantastic time with Mrs Poynter today participating in a NYCOS workshop. We played games, sang rhymes and identified rhythms and beats. Check out some of our work here! 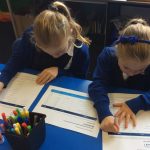 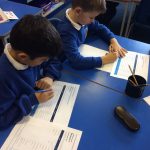 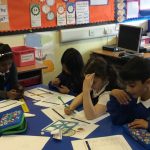 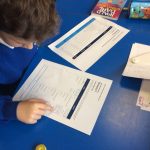 Today we had a visit from Caroleann and Sabina from Lloyds Bank to help us to think about finance and budgeting. We worked in groups to put together a budget using bank statements to give us information about salary and bills. It was hard to calculate how much money they could save but we used brainpower and calculators to help!

Check out our Ocarina practise today!