The West Lothian Sumdog Challenge starts on Friday 2nd June! All pupils are entered and have 1000 questions to complete the challenge, however, please remember all 1000 do not need to be answered for their scores and entries to count. The competitions are based on accuracy rather than completion so it’s better to have 100 accurate answers than 1000 incorrect ones. For each class to qualify at least ten pupils need to answer 100 questions at school, home or both. These questions are set at your child’s level as determined by Sumdog so every pupil has an equal chance of success. Remember to take your time and make sure your answers are correct before clicking them. The contest closes at 8pm on Thursday 8th June.

If you think the photographs are good, wait till you see these ‘action shots’ of us doing gymnastics.

Here’s a ‘sneak preview of what we’ve been up to.

To view these images as a PowerPoint Presentation, simply click on the first one and the screen should expand.  Next hit < or > at the side of the screen to navigate your way around the presentation.

What a wonderful time we had last week, preparing for and presenting our Seashore Assembly ! We worked really hard on personal research tasks, drafting and editing our scripts, learning new songs, selecting instruments to accompany them and adding drama to our performance! It was all made extra special because  our families were in the audience too, thank you to everyone for supporting our hard work and joining in with the fun.

It’s another exciting week this week too as we enjoy our “Health Week” activities.

We loved using super fresh ingredients to create healthy snacks on Monday and found out about what makes a healthy, balanced diet. Thanks to Mrs Green,  for organising the event and to Mrs Jones and Mrs Reid for helping us in the “kitchen.”

We  also learned how to pitch and putt with a golf club and some of us definitely want to try this again!

On Tuesday, P3 had great fun at football training and P2 went on a magical Fairy Walk in the woods! In the afternoon, we made seed bombs with Steve from the Pollination Project and look forward to seeing a host of wild flowers in the school grounds next year, to support our bee population.

Today, we’re busy honing our tennis skills, P2 will be practising gymnastic skills and P3 will be introduced to Dance Ihayami !

Look out for our reviews of  the activities in our next post!

If you are planning on coming along please do let us know as it helps us know how many supplies to order.

Sponsor forms were emailed out a previously but you can also pick one up in school.

Thank you for all reply slips already sent in and also for offers of help on the day. Don’t forget we’re looking for donations of home baking on the day too. 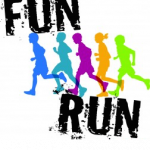 We had a fantastic day learning how to cut, slice, grate, spread and peel lots of different fruits, vegetables and cheeses. We even tried our own washing up! (Mrs Green is keen to make it a homework task to wash our own dishes to improve our washing up skills though!!) We used forks to hold the fruit and vegetables still as we cut them and managed to get really thin slices of apple. We tried to get really long bits of carrot when we peeled them which was tricky at first but then we got the hang of it. We used our creativity to make bright faces on a rice cake or cracker using carrot, cheese, peppers and cucumber.

Well the rain didn’t dampen our spirits for our PolliNation session! We had loads of fun learning more about bees and other animals that like wildflowers. We found out lots of fascinating facts by playing a true or false game then made seed bombs to throw in areas they might grow to provide bees with more wildflowers. We got really dirty but were very happy!

Last Friday, Primary 7 were invited through to the BBC Studios in Glasgow to watch the grand final of ‘Top Class’ hosted by Susan Calman.

Top Class is a competitive knock-out television show in which schools from all over the United Kingdom compete against each other.  They have to answer questions designed to test them to their limits, until, eventually, one school is crowned the champions!  Each team has to face a series of challenging rounds which cover a wide range of subjects. Pupils also have the chance to impress (and gain additional points) during their pet subject round, whilst their teacher is put under pressure in the ‘hot-seat’ during a pop culture round.

Primary 7 were in the audience and we watched the Grand Final with two schools competing.  Since the show has not been aired yet, we’re not allowed to say who the winners were.

When we arrived at the BBC, some of us were searched and some of our bags went through airport style scanners.  We were then led to a room where we waited until we were called by the floor manager.  Once called, we were led to the studio and to our seats.  The floor manager and director gave us signals on when to clap (quicker/louder and slower/quieter) and when to go ‘WOOOOOOOO’ when the mystery round came up.  We were also given time to practise so we looked and sounded good on camera.

During the recording it was surprising what went on.  Hair stylists, make-up artists, script writers and camera operators were busy moving around to ensure the best possible pictures were taken from the best possible angles……. and that the presenter looked her best!  It was a bit like our Sky Academy trip………….with a lot more lights, cameras and actions!

Some of the scenes had to be re-shot because a contestant wasn’t looking directly at the camera or the word wasn’t said clearly.  They even had to re-shoot a sequence because a large fly kept coming into view when they were filming.  In the end, a 25 minute show took 1 hour 20 minutes to record.  This gave us all an appreciation of how effective team working, discussion and co-operation was needed in order to produce a show.  We all really enjoyed the experience and can’t wait to watch ourselves on TV soon.

Remember, to view the above images as a PowerPoint Presentation, simply click on the first one and the screen should expand.  Next hit < or > at the side of the screen to navigate your way around the presentation. 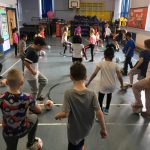 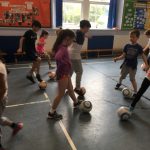 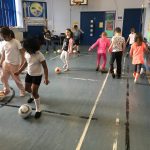 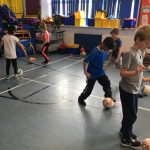 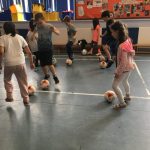 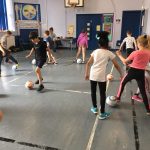 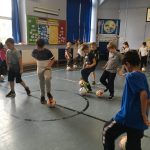 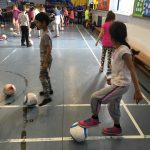 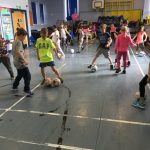 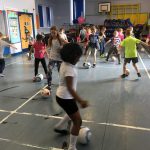 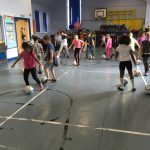 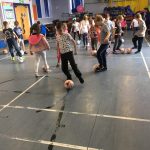 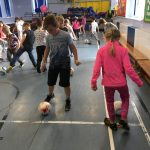 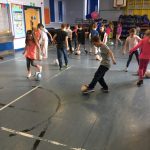 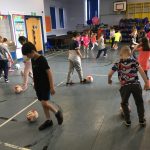 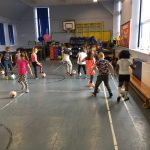 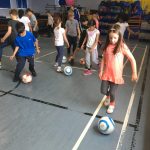 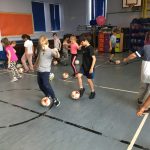 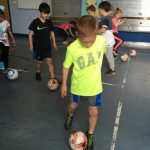 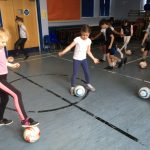 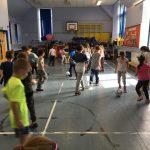 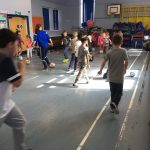 ” It was quite hard dribbling from one foot to the other but we managed to do it!” – Mia

” The partnered work was fun. We were doing follow the leader then swopped  places to practise dribbling and passing.” – Logan

“We learned how to “nutmeg” which means aiming to get the ball through our partner’s legs and it was really good fun!” – Katie

“It was hard toe-tipping the ball and co-ordinating our feet!” – Zoe

” I enjoyed working with other people and helping them remember what to do. It was good team work.” – Poppy

“Traffic-lights was a great game. At red, we had to stop and control the ball with one foot. At amber, we jogged on the spot and toe-tapped the ball. At the green cone, we travelled with the ball, dribbling with both feet.” – Ethan

We have had a busy start to our health week in Primary 6. Yesterday we were practising our golf skills and this morning we had a session at Astro gymnastics. We had the chance to work on lots of different jumps and rolls; including back flips, front handstands, round offs and even back hand springs! 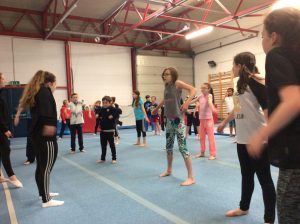 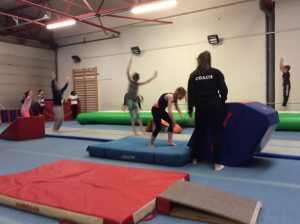 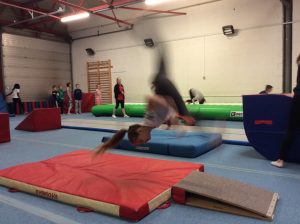 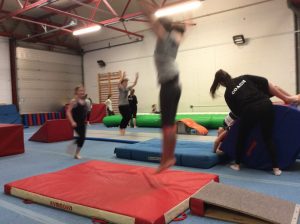 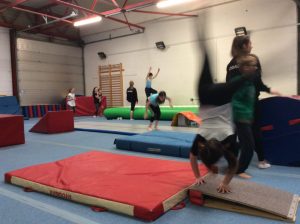