Remote learning – we want to hear from parents, carers and learners

Sustrans Outside In provides fun ideas and inspiration for parents to bring education, health and wellbeing activities into their home.

For parents/carers seeking support & advice to improve
their family’s wellbeing and educational outcomes at
this difficult time, please click the link below:

Updated contact numbers included for Sources of Support if required

Although we have had connectivity and bandwidth problems a-plenty today, the vast majority of children have managed to log in to their assignments and on-line live learning activities. A big ‘Thank you’ to children and parents/carers for your perseverance and commitment while these teething problems are sorted out. As we go forward, we should see less of the problems and more of the successes we are used to.  Rest well … tomorrow is coming!

The BBC are producing lessons during lockdown that you may find useful for home learning.

Here are links to the appropriate webpages:

As directed by the Scottish Government remote learning will begin from Monday 11th January. The following arrangements are in place to ensure continuity of learning for your child during this time:

P1-P3 will receive learning experiences shared through Seesaw, which all children have access to using the Seesaw App or from  web.seesaw.me/parents.

P4-P7 will use Microsoft 0365 Teams, which can be accessed through the children’s Glow account.  Information for parents/carers on how their child uses Teams is available on the following link:  bit.ly/wlglowguide

It is expected that your child accesses Seesaw/Teams daily to engage with the planned teaching and learning experiences. Your child will have a number of tasks assigned to them each day, some of which may be live or recorded lessons. As part of learning and teaching, the children will share their learning, receive feedback and support where required.

To support parents/carers to manage home learning, and ensure a consistent approach across the school, here are specific details of what to expect:

Learning in P1-7 will consist of lessons and activities related to Health and Wellbeing; Numeracy and Mathematics; Literacy and other areas of the curriculum.

Remote learning can be very difficult for families, so please do not hesitate to contact the school if you have any questions or require further information. The school email is wlcarmondean-ps@westlothian.org.uk and the telephone number is 01506 432492.

Our school team will continue to provide all available support to your child and family where we can during this challenging period.

As we can’t produce our traditional Nativity Plays this year, we challenged the whole school to come up with ways to tell the Christmas Story that we could share with parents and friends. Each stage was given only a title and given free reign to produce their part of the story, which would then be stitched together to tell the entire tale.

I think you’ll be impressed – I know I was. Don’t forget to leave us a comment!

Primary 7 have been busy collecting the latest and greatest stories from around Carmondean PS and the world.

The story so far:

Well, Primary 7 were looking at the war poets, particularly Wilfred Owen’s masterpiece ‘dulce et decorum est’ and were inspired to try writing their own poems on the subject of war. The results were truly stunning, so much so that the class held a competition to decide on the best work. Mrs Wylie was inspired to ask some veterans of World War II to judge the competition and, after a lot of debate and heart-searching, the veterans decided that instead of a winner, we needed a first, second and third with the other entries being highly commended. Here, for your delectation, are the winning entries:

No Peace until the Eleventh Hour

Boys under eighteen going to the battlefield to fight for their country.

I am sitting waiting to fight, the fear in me taking over my happy memories.

I will fight, fight for my friends, fight until I take my last breath.

Hearing that there will be no peace until the eleventh hour.

Several months on the battlefield

Only to perish by guns and bombs

Little territory has been claimed

Impaled soldiers dying by the second

Everlasting gunshots over our heads

Racing against time but I think mine is up .

A day on the battlefield feeling tired and wet.

Begging for peace and some new boots.

Cries for help and guns fill my head.

Digging my way out of the toxic clouds.

Figuring out what I did wrong.

Grabbing my last breath before my death.

The sound of planes flying across the battlefield.

A horrific sight, blood spewing from the sodden bodies

With the taste of mud crawling in your mouth.

GET DOWN! GET DOWN! Pleading from the far end.

Explosion after explosion. Caring for others and not themselves.

Standing behind the wagon, head hanging with blood dripping from the nose,

I didn’t panic, I really believed

That I would be devoted to the war.

Oh, I was so wrong; this is the place where panic was conceived,

Everyone feels alienated in this trench.

Our dear Captain, he was betrayed,

No one is laughing, we are all tearful.

We all set up a grave for him,

Crying and ashamed, we are all mournful.

So vile, I am going to be crushed.

Family I need you, I want you.

Remember me forever, life is rushed.

All in, we’re almost there!

Boys come on we’ve got to win!

Come on for our sons and daughters,

Destruction and death, all for peace.

Earth will tremble with our victory today.

Flaming buildings, towns in ruins but it’s over, we have won.

Glory and greatness awaits us boys,

Heroes beyond our lifetimes, true glory my friends.

In just a few more days, they will surrender.

Children back home will thank us always.

Men deserve better than this.

It is always a pleasure to see examples of good work in school, but these two pieces blew me away completely. The children in P7 have been studying the book ‘Wonder’, and one of the tasks was to re-design the book cover. I think you’ll see what I mean with these two examples: 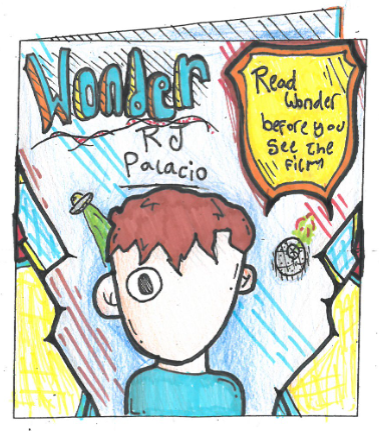 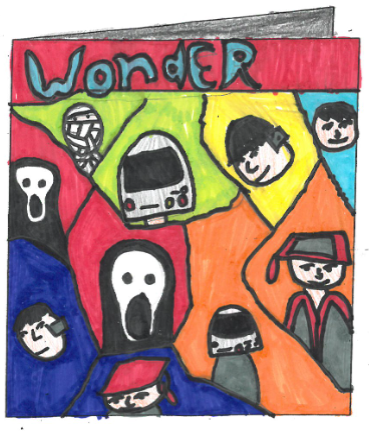 What ‘Wonder’ – ful examples from both children. I look forward to seeing more of their quality work in future.  Well done, boys!

Lovingly created by our Primary 7 Learners. Please leave us a comment.

Your child should have received their ‘Read, Write, Count’ gift pack today. Normally, we would have invited you into school to see the resources gifted by the Scottish Book Trust and you could have heard your child’s teacher reading one of the books. Due to Covid, instead, we have videoed the reading for you to enjoy at home:

Enjoy your Read, Write, Count bag – it is really important to child-development that you read at home with your child.

Your child should have received their ‘Read, Write, Count’ gift pack today. Normally, we would have invited you into school to see the resources gifted by the Scottish Book Trust and you could have heard your child’s teacher reading one of the books. Due to Covid, instead, we have videoed the reading for you to enjoy at home:

Primary 3 Ms Smith reads ‘The Sea Mice and the Stars’

Enjoy your Read, Write, Count bag – it is really important to child-development that you read at home with your child.

Your child should have received their BookBug gift pack today. Normally, we would have invited you into school to see the resources gifted by the Scottish Book Trust and you could have heard your child’s teacher reading one of the books. Due to Covid, instead, we have videoed the reading for you to enjoy at home, the idea being you will carry on the good work with your child:

Ms Christy Reads ‘This is a Dog’

Enjoy your BookBug bag – it is really important to child-development that you read at home with your child.

Each year, we are required to compile and publish our Standards and Quality Report, summarising the progress we have made with our School Improvement Plan the preceding year and quantifying our performance against the Quality Indicators of the self-evaluation Document HGIOS 4 (How Good is Our School 4).  To acces the Standards and Quality Report, please click on the link below.

Primary 7 learners have started their own News Channel and would like you to comment on their first ever public showing. The subject this month continues the theme being addressed in assemblies, Anti-Racism. Please encourage our learners by leaving a comment.

If you know of someone who is vulnerable and may be at risk from fire in their own home, you can request a fire safety check on their behalf. See link below for details:

Link to ‘Make the Call’ Video

In the run up to bonfire night, Police Scotland, West Lothian Council and Scottish Fire & Rescue are keen to keep everyone safe. In previous years we have seen firework-related anti-social behaviour (ASB) and disorder in this area, and we are asking for your help to prevent this occurring again.  This year, we are also facing the added challenge of preventing the spread of COVID 19 within our communities.  As a result organised fireworks displays and bonfires are unlikely to be permitted.

The Scottish Government is continually reviewing its COVID guidance and up to date information on what is and isn’t permissible can be found here https://www.gov.scot/coronavirus-covid-19/

We are offering the following advice to stay safe this fireworks night:

Unauthorised bonfires and firework displays have resulted in serious harm and injury in the past.  Further bonfire safety advice can be found here https://www.firescotland.gov.uk/your-safety/bonfire-safety.aspx

Those who choose to get involved in antisocial behaviour or disorder on or around the 5 November 2020 will be dealt with robustly and may also be subject to prosecution.

Please help us make sure that everyone has a safe and enjoyable bonfire night.

Thank you in advance for your understanding and assistance.

What are we blogging about?