This week P7 went to Sky Academy and had a SPECTACULAR time! 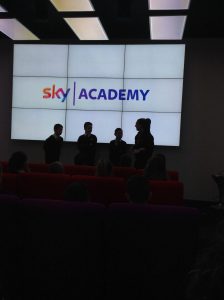 P7 made their own news report with the help of the Sky Academy team.

We have been using our listening, teamwork, co-operation and being a responsible citizen and representing Bankton Primary School.

P7  want to thank all the Sky Academy staff who trusted us with their expensive equipment, such as their £60,000 cameras and also their editing computers.

Special thanks to our helpers,Chris,Camy,Leanne and Alan!!!!! 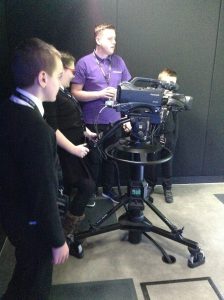 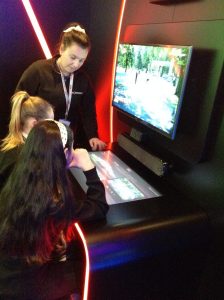 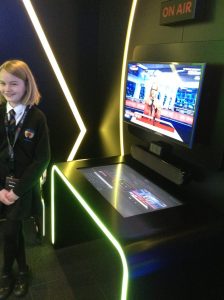 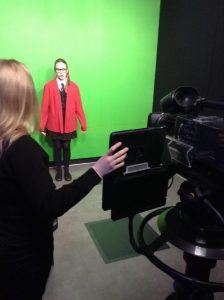 P7 had their own tour around Sky so when they are older they will know choices there are for jobs there. 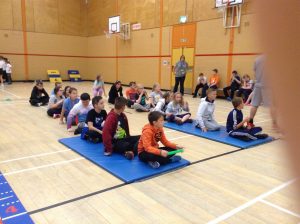 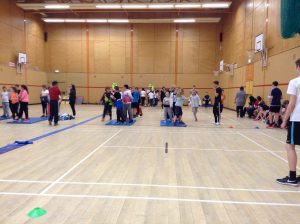 In these pictures we are doing the relay races.We were to run up to a cone then run behind our teams,then back to the front and pass the baton.

Katie says “We came second and third in the final races.”

Deacon says “It was amazing and fun!”

Beth K says “It was entertaining.”

In these pictures below we are doing the standing long jump 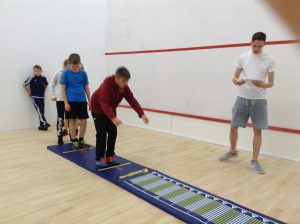 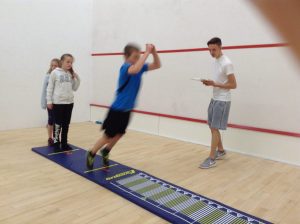 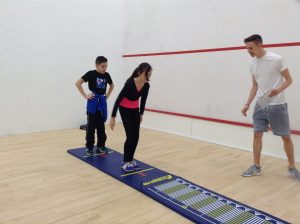 We were to stand behind a line and jump as far as we could and try to get as high a score as we could.

Overall, we had a fantastic day.  It was a good opportunity to for teamwork and communication with the people in our class.

On Tuesday, Primary 7 took a trip to the James Young High School for their Health Conference.  We enjoyed a day of sporting activities, such as Rugby, Tennis, Handball and Dance.  We found it helpful and interesting to find out our tutor groups and had a chance to meet some new friends.  This trip to JYHS also made us more confident about going up to James Young and us moving on. We met the P.E teachers and Mrs. Hatch (The JYHS head teacher) also spoke to us about or move to JYHS. 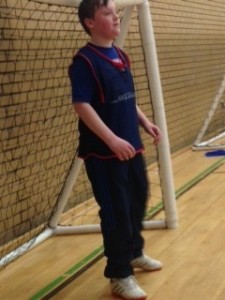 Stewart “It was exciting because we got to meet our tutor group.”

Jack “I made a couple of friends. One of their names was Josh.”

Robbie “My favourite activity was definitely handball, it was really fun.”

Tiger Woods must be extremely worried now that Fraser and Ailsa Muir are developing their golfing skills to medal standard! This very modest brother & sister duo had to be persuaded to share their success by Mrs Ferguson. We are extremely proud of their sporting skills development and hope that this is only the start of a great golfing career in the future.

Our P.4 and P.5 dancers had another triumph last week at Howden Park Centre when their Next Steps Dance Troupe took the first place trophy for amazing Hip Hop moves. They were very proud to share their success at assembly and posed for a photo ‘with attitude’

A very talented P.1 writer came to my office to share her 3 part Pirate Adventure this week – full of wow words she had ‘sounded’ herself in sentences with capital letters and full stops. Move over J.K. Rowling – Lauren is making real progress in her writing!

Article 29: You have a right to an education which helps you develop your skills and talents

P.4 and P.5 pupils learned the skills of knights of the past in the first of a series of fencing after school club sessions. They learned about fast, furious footwork , moving forward and backwards in a straight line and the need to listen carefully to instructions. All enjoyed wearing their fencing head guards and handled their swords with great discipline.

They responded immediately to the command, ‘En garde!’ And the pink cheeks at the end of the lesson showed what a strong, hard workout everyone had had! Roll on next Tuesday.

After reading Meg’s Eggs the nursery children decorated dinosaur eggs of their own.

Can you believe it???  Over the last week several of the eggs have HATCHED!!!

Kian, Ryan, Charlie, Chloe and Lauren woke up to find that they are now the proud mummies and daddies of some very cute baby dinosaurs!

Ryan’s dinosaur even brought a treat for him and Kian. 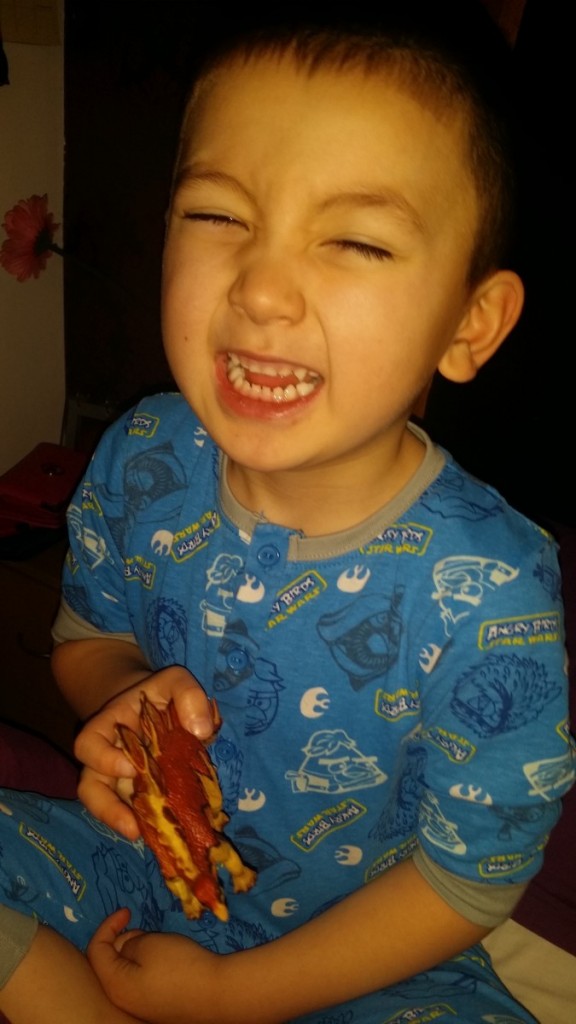 A group of pupils from Bankton represented their school to the highest standard at the West Lothian Heat of the National Burns Federation Competition, held in St. Kentigern’s Academy on Wednesday, 6th March.

Louis Hartl-Hazette played Auld Lang Syne very competently on the trumpet – I’m sure Mrs. Scobie, our brass tutor would have been very proud of you!

Katie Tripney, Kai Wilson and Beth Kinroy performed Burns’ poetry from ‘A parcel of rogues among nations’ to ‘The Joyful Widower’ and ‘Scots Wha Hae’. Our youngest performer, Eric McLeod from P.4 brought some humour with his Scottish poem. All children performed their poem with drama and great attention to the meaning of Scots language. Mrs. Ferguson and I were extremely proud of our Bankton Champs! 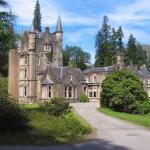 A very busy and eventful day at Benmore for all activity groups! Two of the groups were very successful in their orienteering. Megan Hunter was fast and efficient and could now give Mrs. Herman and Mrs. Reilly some lessons as they got lost momentarily looking for others in their group. The climbers and abseilers were brave. Amber was excellent in both and was particularly helpful to others – helping to adjust their clips and harnesses. Sean Burnett had an unexpected cold ‘dip’ during canoeing but completely recovered after curry and cake! Two groups accepted the cave challenge while another group worked as a great team encouraging each other on the high ropes. Leah, Erin, Emma, Sonny, Shaun Simpson and Ms Kennedy made it to the top of the podium and jumped off (fully harnessed) to catch the trapeze! After an evening scavenger hunt it’s off to bed ….. I’m sure by the time I’ve finished this Blog Post ….. They will all be sound asleep! P.7 – we miss you! 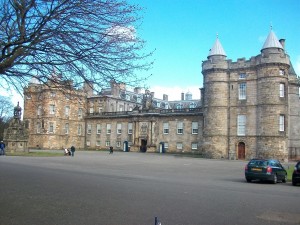 P5swent to Edinburgh to visit Holyrood Palace and The National Museum of Scotland.  We all enjoyed the day.  When we arrived we spotted bullet marks on the old tower, they might be there because the English tried to kidnap Mary Stewart, Queen of Scots from the Palace.  Holyrood Palace is very fancy, the Great Staircase is outstandingly regal.  We also saw a 500 year old crime scene.  In the corner of Mary’s bed chamber we observed the secret staircase that Lord Darnley used in the murder of Riccio.  In the next room and on the staircase we discovered the blood stains from the murder, some people think it is fake!!!  A short time later we entered the dining room which contained about 3000 pieces of silver.  In the gallery, on the pictures, we saw evidence of sword damage to the pictures.  The slash marks were cause by English soldiers who were angry that they did not beat Scotland in a battle.  By P5B.

After Holyrood Palace we went to the museum.  Here is what the children enjoyed.

“I enjoyed looking at the technical section of the museum.”  Jamie.

“I liked putting all of the Tudor clothes on!”  Robbie.

“I enjoyed looking for the information to answer the questions in my workbook, at the museum.”  Rachel.

“I enjoyed looking at the animals, my favourite was the tiger!”  Emma K.

“I liked visiting the space area.  My favourite thing was the meteor.”  Kai.

“At the animal section there was an activity to find out which animal we weighed the same as, I was the Boa Constrictor.”  Alexander.

“I liked looking at the old coins from the time of Mary Queen of Scots.”  Lewis.

It has been another busy week in P6/7. The Christmas post is now underway and P7’s from both classes are enjoying collecting, organising and delivering the Christmas cards to all of the classes in school.

Social dance is coming on very well, with everyone now becoming quite familiar with the steps for a number of the Scottish dances. Mrs Stewart and Mrs Ferguson came along and joined in the practice and Mrs Stewart said that she can’t wait to get her dance card filled. Not long to wait now to put all that practice into action!

P7s have started working in their groups to create travel brochures for different countries who will be taking part in the Commonwealth Games next year. This event is part of the transition project  which was launched just a week ago at James Young High School.

In class, we have been finding out about the structure of the Earth. We have done our research using books and the internet and can’t wait to make our models showing all of the different layers of our planet and the facts we’ve learned.

We have been trying to make sure that we can all get on Glow and everyone who managed to e-mail Mrs Balfour got 50 house points. Some people have still got to try it out.

Congratulations to Mark and Hannah-Beth who were voted this week’s buddies of the week. Congratulations also to our new class champions- Rachel (language) and Jack (maths).