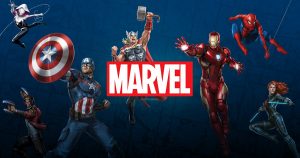 Marvel has revolutionised the way movie franchises are made. By taking a careful approach and using four years to establish their core main characters, Marvel done something that had never been done in cinema before. With their careful planning and consideration, the Marvel movies quickly began to climb up the rankings of the highest grossing films of all time.

As a whole: Star Wars grossed $9 billion across 12 movies, Harry Potter grossed $7.7 billion across seven movies and James Bond made $5.8 billion across 25 movies. In the course 22 movies in just 11 years, the Marvel cinematic universe has overtaken all of the above properties with a combined worldwide gross of $19.9 billion.

Marvel utilises long term storytelling and uses references in their other movies to get fans excited for upcoming movies. They first hinted at the long line of movies to come in the very first movie in the marvel cinematic universe ‘Iron Man’ where Samuel Jackson appeared as Nick Fury. By using phases to group films together, Marvel can recall back to other movies in other phases such as done in ‘Avengers: Infinity War’ and ‘Avengers: Endgame’ where all of our favourite heroes teamed up to combat and defeat their universe’s greatest threat, Thanos. With their careful planning and excellent execution, Marvel has made a truly Marvel-ous franchise.