NASA astronomers have confirmed a 50 year old speculation that there was evidence of water, with large deposits of ice, resting on our moon’s north and south poles. 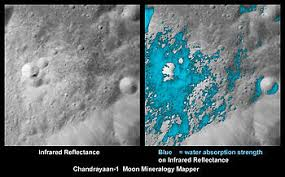 The Chandrayaan 1 was a lunar probe that roamed the moon’s desolate landscape from October 2008 to August 2009. Its main goal was to create a 3 dimensional map of both halves of the moon, but it also gathered further data on the minerals in moon rock. The lunar probe also showcased how advanced the Indian space program was.

New Evidence Has Come To Light

After further analysis of data taken from Chandrayaan 1, astronomers have discovered extensive evidence in favour of there being ice on our moon. There has been speculation on the possibility of ice deposits dwelling in our moon’s craters since the 1960’s, however there hasn’t been any research invested into the matter.

Over the years this speculation has grown more and more likely with more moons from other planets being discovered to have ice on them. The only reason we haven’t found it yet, is because all the ice on the moon we know of so far are on the very top and bottom of the moon, and both sides are permanently in shadow. Both satellites and probes would’ve struggled to see them, especially when most of the ice has accumulated in craters. Only now – thorough analysis of Chandrayaan 1’s data – can we determine that there is indeed ice on our moon.

A Cosmic Shift May Be On The Horizon for Humankind

This is big news for the future of space exploration, as it makes a human colonisation of the moon more viable than ever before. It holds the possibility of bringing forward another moon landing, as there is now a motive for it. It has also excited conspiracy theorists, as this new evidence furthers the possibility of an alien species on our moon. This discovery only begs for further, more detailed analysis which is bound to excite astronomers, futurists, and conspiracy theorists alike.