We have had a great festive term here at Dunrossness.

The Carol Concert was fantastic, the classes all sang beautifully. The mulled apple juice and mince pies were a hit too.

Thank you once again for your support for our fundraising efforts.

In addition to this we also donated £109.64 to Save the Children for our Christmas Jumper Day.

Wishing you all a lovely festive break and look forward to seeing you all next year! 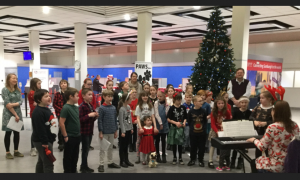 On 11 November, the DPS netball team had their first fixture in the South league of the Shetland Primary Schools’ league at Scalloway.  The team was able to watch the first few matches to check out their opposition before playing the last two games of the day.  The team was GS Becca Williamson, GA Isaiah Christie, WA Hannah Rosie, C Carla Johnson, WD Robbie Henderson/Hayden Thomson, GD Alex Christie and GK Evie Leslie/Koll McConnachie.  First match was against Cunningsburgh.  Dunrossness played really slick netball, linking really well throughout the court.  The final score was 13-0 to Dunrossness.  Straight on to the next game against Sound Blue.  This was always going to be a really tough game, with Sound having some district squad players.  DPS took a half –time lead of 2-0 and spirits were high.  I’m sure the DPS team wished they hadn’t put in so much effort in the first game, as tiredness was setting in during the second half.  Luckily they held on and the game ended 2-1 to DPS.  What a result against really tough opposition!  The coaches were so impressed by their team play and quick passing up the court.

The second fixture in this league was on 2 December, again in Scalloway.  The team for this fixture was Becca Williamson, Callum Morrison, Hannah Rosie, Carla Johnson, Robbie Henderson, Isaiah Christie, Alex Christie and Evie Leslie.  For these games, the team switched around throughout to give more experience and some rest.  They played mostly as GS Becca, GA Isaiah, WA Hannah, C Carla, WD Robbie/Callum, GD Alex, GK Evie/Callum, with Callum also having a go at GA, Robbie a go at C, Carla a go at WD and Isaiah a go at GK.  First up was Whalsay 2, Whalsay’s younger team.  DPS stormed away to a 14-0 victory.  No rest before playing against Whalsay 1, but this didn’t phase our team as they came out 7-0 winners!  This result was completely unexpected from the coaches and the team.  We knew from watching the other matches that the final game against Scalloway would be the toughest one.  Dunrossness used their speed and great defending skills well to finish the first half against Scalloway 4-1.  The second half was a bit harder as Scalloway adjusted their play, but Dunrossness held out to win 6-2.  Again, the coaches were very impressed by the team play, particularly the ability of the players to swap positions and fight for every ball!

The next fixture is 4 February where we’ll play Hamnavoe and Sandwick to finish off the south league.

If anyone is interested in playing netball, please get in touch with the school office.  P6s and P7s train on Wednesdays 3:30-4:15 and P4s and P5s train on Mondays 3:30-4:15.  Both lots of training have finished until the new year, but info will be sent out after the holidays to confirm the start date.  The netball league prioritises P7s, but nobody has to play in the league if they don’t want to.”