Here is a copy of the lunch menu for October – December!

I can hardly believe we have a date set for the school Christmas dinner already!!

Attached is the School Menu for this term.

Here are some quotes from the Cullivoe Bairn’s about the day!

“I think the netball was very good because we won!” – Poppy

“I think the football team did very well!” – Lee

“I liked watching the netball because it was fun watching it.” – Monica

“I liked it at the end when we found out that all the yell teams  won.” – Honey

“I think that the primary football teams were very fair.” – Dean

“I thought that they all played really nicely!” – Katy

“The Unst primary netballers played well but we were better!” – Ruby

“I think that the primary netball did quite well together because they worked as a team!” – Abbie

“I was so proud of the netball lasses on the day! They were fantastic!” – Miss J

“I  enjoyed watching it all.” – Aaron

One day Miss Black came into school and told us that P4-7 were doing a fashion show so we had to plan out what we were going to wear. We had 5 weeks to prepare and get all of our costumes ready. And we all came up with something even though some of our plans changed.

The theme was weather. The next week we started making our costumes.

“It was fun but challenging!” – Honey

“It was quite hard getting all the materials together but we had fun!” – Hunter

” It was fun doing it even though we had to change some of our designs.” – Aaron

It was really hard because I had to change my design.” – Lee

Our old teacher Mrs Hay had a baby boy called Magni Quinn Soren Hay. She came in with Magni and most of us got to hold him and get our picture taken. It was really exciting to meet him and we wish Mrs Hay good luck! Congratulations! We are looking forward to having him at the school in the future! 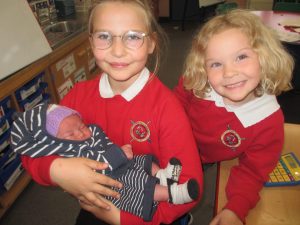 On Tuesday the eighth of May we went to Breckon farm. We all came into school bright and cheery and  all got suited up for our long walk.

First we met James O’Breckon and went to see the cows. One of the white cows was very cheeky and licked our hands. There was a bull ,who was four years old called Jamie. All the cows had really long tongues and no teeth on their top gum. Their food was made of oats, barley and hay. The cows all had different coloured tongues, depending on what colour they were. There was a metal ladder in the corner of the calf and the bull’s pen. You could go behind it for protection in case the cows got aggressive. James and his dad had a gadget that they put on the cows tail which beeped and sent a message to their phones  when the cow was having contractions. The cows had drinking tubes on the walls, the calf pen had a lower one. The tubes only let out water when the cows put their mouths on them.

Next James and his dad, Alex, showed us the way to the sheep shed. When we went in there was three pens, each pen had a sheep and a lamb. six of the lambs in the shed were born the night before, the newest lamb was born at 3 am.  The sheep had tags on their left ears to show what farm they came from. James told us that when the lambs are first born he sprays iodine on their cords so they don’t get infected. If the lambs were born outside on a cold day they put a plastic lambs coats on them to keep them warm and dry.

Almost at the end of the tour we went to see the crops that Alex is growing. Every year he grows cabbages, some for eating and some to feed to the lambs. He also harvest seeds to grow the next year. we all got to plant a cabbage seed of our own. The north side was called Heidi and the south was called Hunter.

We started our day by getting on the bus and going to the pier to meet the Swan. At the pier there was a big ship which was loading old cars to take them away. We went off on the Swan in two groups, one went in the morning and the other one went in the afternoon.

Both groups sailed the Swan from the pier, around an island and back again. The morning group got hot chocolate and the afternoon group got to have their lunch on board!

We learned how to put up the sails (well.. the first group did, the second group had some problems with a knotted up sail!!), tie some different knots, coil ropes and steer the boat. It was really fun and we got to see  seals and we passed the ferry going back to Unst. The ferry beeped its horn at us!

Here are some photos:

Today we have been really enjoying a visit from Chris. He’s an astronomer and has been teaching us about stars, planets, moons and our solar system!

We’ve been using technology to learn more about each planet in our solar system, made scale models of our solar system using playdough, learnt more about the night sky and the star consellations we can see and P4-7 have been doing some work using robotic telescopes!

Here are some pictures of a great day full of learning!

On Wednesday we hosted our first transition day for all of the p.7s. We did lots of activities to get to know each other better. First we played ice breaker bingo, we had to go around everyone and ask them questions. Then we got put into our groups. We had to come up with a team name and a chant to present to everyone else. We then had to create a team flag. By then it was snack time and we all played together. When we came back we had another activity that involved putting pictures of Mid Yell school staff on a poster so that we were familiar with them. After that the teachers revealed the project we would be working on over the next few months. Throughout the day we had visits from Mrs. Tulloch, Mr. Anderson and Ms. Hart who told us more about secondary and about the subjects they teach. We had a fun day!

This afternoon we went to the Voe to collect seaweed which we are going to be using in our garden to help fertilise the soil. It was lovely to have Dot and Albi, from our community, join us on this trip!

We were lucky to get a beautiful sunny day for our trip and we managed to fill over 10 bags of seaweed!

We really enjoyed looking at the different creatures that live on the beach – from seals, to crabs, to insects!

To finish up we had a stone skimming competition. Everyone picked 3 stones to try skimming… Some people had more luck than others!
Our winners were Jasmine, Hunter and Lee who all managed to get 3 skims!