The Anderson Institute opened on 4th August 1862. It was the gift of Arthur Anderson, whose aims were to increase the limited provision of elementary education for poor children and to provide higher education for children whose parents could afford to pay fees. Arthur Anderson bought a site, made arrangements for the building of a school and schoolhouse and because of the failure to raise money from the few people who might have subscribed, he had to endow the school himself. When the school first opened there were only fee paying higher school pupils but within a few months the elementary school opened too.

The two sections of the school continued to operate as one until the end of the century. The school building had three parts: the Headmaster had the central part as his home where he could keep boarders to augment his income, and the two wings were the teaching areas – the north wing for the upper school and the south wing for the lower. In December 1902 the elementary pupils were transferred to the new Central School and the Anderson Institute became concerned only with higher education. There was considerable advantage in that the south wing could provide more classroom space and that space sufficed until the 1920s when the first extension to the building was carried out.

The Headmaster’s accommodation was converted to classrooms and there was an extension on the west side. The frontage of the school remained as it was, but the pupils could, after 1926, go from one part of the school to another without having to go outside. There were two new classrooms out to the west, and the small divided rooms in the wings were made into bigger classrooms. To add to the facilities of the school, the fields of Bellevue were bought to provide outdoor recreation. The school roll during the 1920s and 1930s remained around 130-150 and it was a period of stability and considerable academic success.

During World War II the Institute was taken over to be used as a military hospital and 130 pupils were accommodated in the Central School along with the pupils of that school in overcrowded conditions.

When the war was over and the pupils returned to the Institute in April 1946, there was a sense of space again but that situation was not to last for long. The Education (Scotland) Act of 1945 allowed secondary education to become a reality for many more young people. A report from the Inspectorate indicated that the Institute lacked a gymnasium and facilities for technical and domestic courses, and there was insufficient accommodation for art and music. The education in secondary schools was to be extended not only to more pupils but also to a wider curriculum. At the beginning of 1947 there were 152 pupils but the following session there were 202 of whom 73 were in first year. For a number of years ex naval wooden huts were adapted to provide the extra classrooms required and to fulfil the needs of the new subjects in the curriculum.

The school roll grew gradually, and work on a much needed extension began in January 1962, the year that marked the centenary of the school, when the school roll had risen to 347. Once again the new buildings stretched to the west at the rear of the school. A bridge was made between the old and the new which had a large assembly hall, a separate gymnasium and purpose built classrooms. The pupils who began Class 1 in 1964 when all building was complete finished their six years in 1970 when the school took on its present form.

In 1970 to fulfil the needs of comprehensive education, the Anderson High School was formed from the Anderson Educational Institute and the secondary division of the Lerwick Central School. There was not enough accommodation for the pupils to be together in one building. For a number of years the school was divided between two sites while planning for, and then actual construction, took place. A vast new block of classroom accommodation, followed by a Games Hall, dwarfed the original building which became the English Department, but not even the vastness of the new extension could cope with the increasing roll of the 1970s and hutted accommodation has remained a necessity.

In 1993 a temporary extension linked to the school was built to house the Chemistry and Biology departments. In August 2005, the Additional Support Needs department was opened, off Gressay Loan.

In October 2017 the Anderson High School moved from the original site on the Knab to a new building at Clickimin. 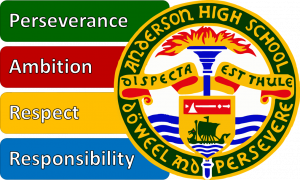