Primary 6B have came back to school enthusiastic and ready to learn after having a lovely October break.

Waiting for Charlie and Murray were letters from the author they had written to in Primary 5.   David Baddiel had written back much to the boys’ excitement.

Charlie said that he was really excited when he saw the letter and he liked David Baddiel’s comment at the end saying that he gets his ideas from his imagination and from his son. 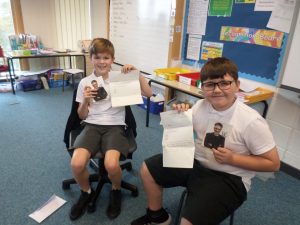