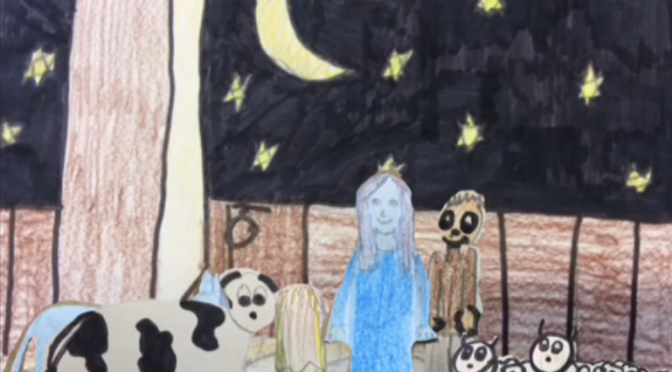 Pupils at Fossoway Primary tackled a whole new collection of skills and abilities by challenging themselves to use the iPad to tell the story of the Nativity in French. Pupils decided to create their own digital puppet show using the Puppet Pals HD app that comes on the devices.

This was a really creative way of providing a stimulus to speak French and develop good ICT and collaboration skills. Pupils decided to create their own puppets by photographing their creations and cutting them out using the app so that they can be moved around and placed within the scene. All of this took place during the mad rush to get to the end of term and prepare the work for a school assembly!

Class teacher Anne Melville said “There were eight groups of children each doing a very short section and then I edited some of them together into groups. Both the animation and the French are a bit dodgy in places but as you say there was a lot of learning both for the children and for me!”

One of the issues she had was embedding the video into a powerpoint and we’ll help out here to get that skill sorted out.

A great effort at putting everything together and as we have said on countless occasions, no one is expecting that teachers go full-on digital in their work with young people but instead begin with exploring the possibilities with digital and just giving it a go. Excellent attitude from everyone at Fossoway.