Another successful P7 prom took place in June, where Portmoak P7s were joined by P7 pupils from across the cluster.

Here are our P7s in all their finery: 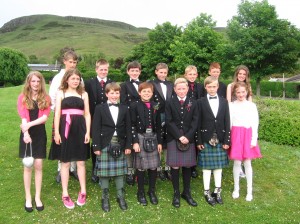 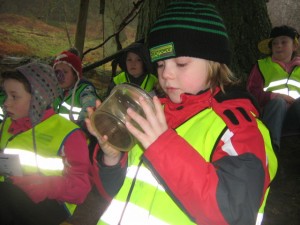 On the 7th of March primary 2/3 visited RSPB Loch Leven as part of their topic ‘Living Things’. We had a great day outdoors with the RSPB team! We were learning about the variety of living things in both the woodlands and the wetlands.  In particular, the class really enjoyed going on a minibeast hunt, pond dipping and learning all about the endangered bird – the Lapwing.  Although the weather was a little miserable we were all wrapped up and had a fantastic day outdoors! 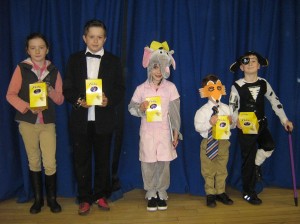 Portmoak Primary welcomed a whole host of book characters into school to celebrate World Book Day in March. The staff were impressed by the imaginative outfits and range of ideas that our pupils came up with and had a tricky job on their hands choosing a winning costume from each class.

The class winners were:

P6/7: Niamh Brown as Amy Fleming from the Heartlands books.

See if you can spot Wally, from the Where’s Wally books in the picture below! 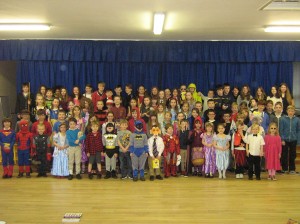 Margaret Wilson (our retired Headteacher) and Alistair Morgan (from the Jolly Beggar’s Burns Club) had their work cut out once again this year when judging the winners for our Scottish Poetry Competition. Very well done to everyone who learned their poem. There was a big difference in the number of children who chose to compete across the classes this year, so we decided to award more certificates to children in classes where there was a lot of competition. The winners for the 2013 are: 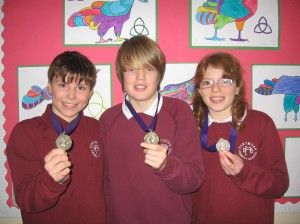 Our wee school was once again well represented at the Kinross-shire event on 12th February, with a total of 11 of the 40 top results (top 10 each of P6 boys/girls and P7 boys/girls) coming from Portmoak. Our results were:

Feedback from staff at the event once again praised the sportsmanship and support for one another shown by Portmoak pupils. Very well done to all who took part.

Pupils coming from 1st-3rd were presented with medals. Pictured: Gregor, Thomas and Rebecca with their medals.

We entered a team of runners for each of the events at the Perth and Kinross event at Scone on 19th February. This event was made up of the top runners from the locality events. Notable results from this were:

It has been panto season over at Portmoak Primary in the last few weeks, as Primary 4-7 put on a rendition of Aladdin. A school pantomime has become a bi-annual event at Portmoak, and is something which is very much looked forward to by everyone in the school community. The choir, led by Mr Young, music teacher, were made up of P4-5s and P6-7 fulfilled all of the acting and backstage roles. Miss Kettles, the P5/6 teacher, was the director. The children played to a sell out crowd on Wednesday and Thursday evening, as well as an afternoon performance on the Tuesday. Family and friends who came to see Aladdin were extremely complementary about the standard of performance from all concerned.

Aladdin was played by Grace Cowie this year and Esme Allen was princess Jasmine. Ewan Cowe made the audience laugh out loud in his reprisal of the Widow Twankey and there were many boos to be heard as Max Spenke portrayed the evil Abenazer.

Louise Gordon, headteacher, said “I am so proud of the standard achieved by our senior pupils at this year’s pantomime. Thank you to the staff for their sterling work towards the pantomime and for all pulling together to ensure it could happen, particular mention should go to Miss Kettles, who was the driving force behind the whole thing. A well deserved holiday is coming up for all involved – well done!” 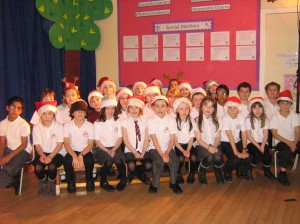 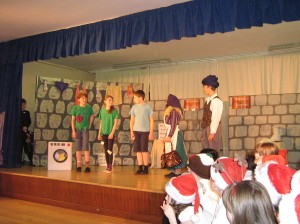 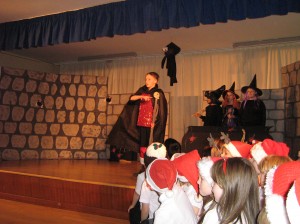 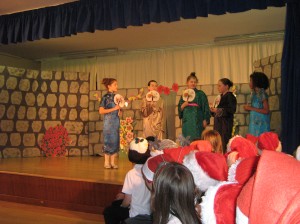 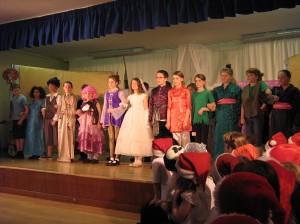 Eight members of Portmoak Pupil Council faced the dragons on Tuesday night to make a bid for books for their school library.

Leon Spenke, Sophie Palin, Rebecca Stevenson, Emma Mitchell, Johnathan Venters, Duncan Ballantyne, Nikki Dahl and Lucy Hudson went along to the Kinross-shire Round Table Dragon’s Den event in the Green Hotel, Kinross, to pitch their cause to the panel of dragons in an event similar to the popular BBC programme. The children explained how the library needs a lot of work and that £1000 from the dragons would help transform the sad and tired books into an exciting new stock of books for the new library. The Pupil Council have surveyed all pupils, from P1-7, about their favourite books and authors and they shared some of their recommendations with the dragons.

Kirstin Lowe, representing Friends of Portmoak, the school’s Parent Council, applied for the event on the children’s behalf and explained that everyone at Portmoak Primary have been fundraising hard for the new library and the small 5 class school, with only 111 children, have raised a fantastic amount of money, over £6,000, since August 2011.

There were 8 organisations in total chosen to attend the event, each bidding for their share of the Round Table’s community fund. It was a nail biting wait to the end of the night to see who was going to walk away with a share of the cash. Louise Gordon, Headteacher, said, “I am so proud of our pupil councillors. They wrote their own sections of the presentation which they then delivered confidently and articulately. The Dragon’s Den event was a wonderful opportunity for them and everyone at Portmoak is delighted with their success. We would all like to say a very big thank you to the Kinross-shire Round Table for their generous donation to our library. The children can’t wait to start ordering their new books!” 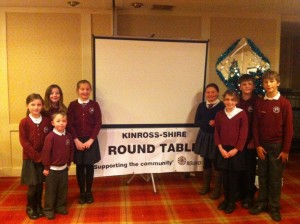 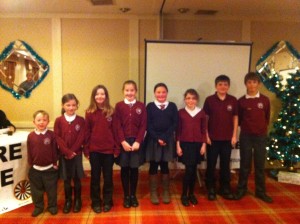 Those of you who have been following Portmoak’s cricket success over the last few years may not be surprised to hear that the 5 class school fielded an all girls cricket team for the first Scottish Girls Under 12 Kwik Cricket Competition on Sunday 26th August. Cricket Scotland hope to make this an annual event, as the day was a great success and much enjoyed by all who attended. The sun came out during the afternoon to make for ideal conditions in Doo’cot Park, Perth. 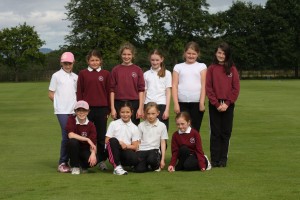 Portmoak girls faced some stiff competition on the day, as there were not many other school teams there, but mainly cricket clubs. In fact, we were the only school from Perth and Kinross who entered a girls team for the competition. There were 6 teams in total on the day, Watsonians Cricket Club, Kinross Cricket Club, Portmoak Primary School, Loretto, Arbroath United Cricket Club and Carlton Cricket Club. Everyone played the other 5 teams in a round robin format. There were several close defeats for the Portmoak team, who won one of their games. The overall winner was Kinross Cricket Club, proving that girls’ cricket is certainly going strong in the Kinross area!

Portmoak’s team were: Megan Brown, Krystyna Muzsynski, Megan Ferguson, Grace Cowie, Esme Allen, Sylvie McKenzie, Rebecca Mitchell, Eve Robertson, Lilly Spenke and Carla Spowart. All of the girls played brilliantly on the day and the whole school are really proud of them for taking on the best teams in Scottish Girls’ under 12 cricket. 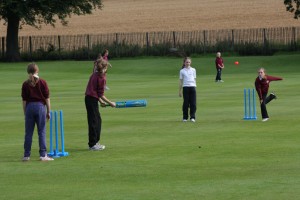 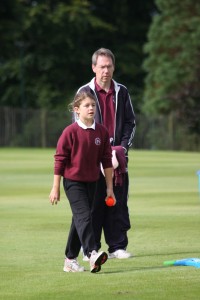 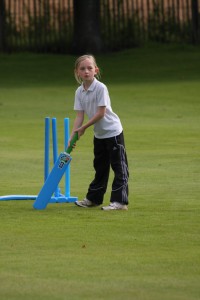 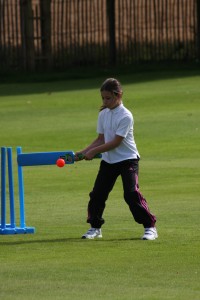 Thank you to all of the family and friends who attended our school sports on Monday 4th June. It was another successful year with Leven lifting the Sports Shield for the first time in recent memory and Lomond taking the Fair Play award for the second year in a row. Thanks too for the donations of home baking and to the ladies who organized the fundraising refreshment stall.

The inter-house Cricket and Football were much enjoyed by all, with Bishop winning the cricket this year and Lomond winning the football. 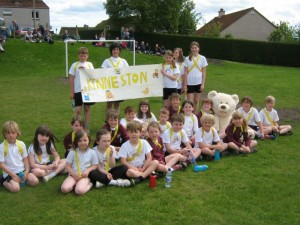 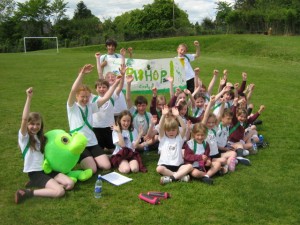 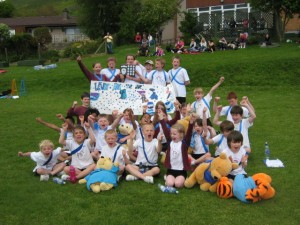 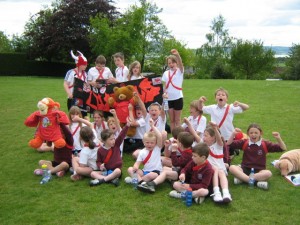 On Thursday 28th June 2012, the Portmoak Festival Committee once more organised a successful school leavers’ prom for the Kinross Cluster. P7 were looking fab on the day with the boys all favouring very smart kilts this year and the girls in gorgeous dresses. The event was held in the Portmoak Festival Marquee, which added a sense of grandeur to the occasion and a good time was had by all. Many thanks again to the Festival Committee for continuing to support this super event. 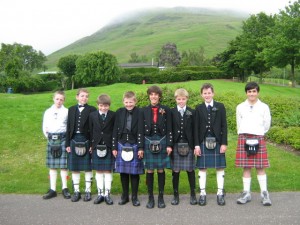 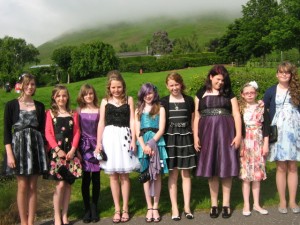 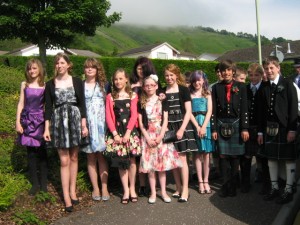 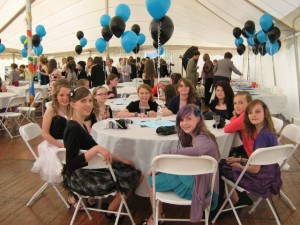 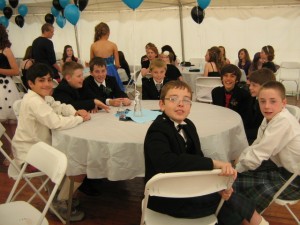