It has been some time since the last post here.  January has been and gone and we are already in February.  A lot of things have been going on in the library as shown below (in no particular order).

Activities: Dungeons & Dragons – The increasingly popular D&D activity on Tuesday after school and Friday afternoons continues.  On Tuesdays, a small group of 5-6 pupils meets to play a game run by myself.  We are using the 5th edition Starter set running The Lost Mines of Phandelver adventure.  It is proving quite taxing for the pupils’ characters at times.  Just a pity we only have 50 minutes to play it in. 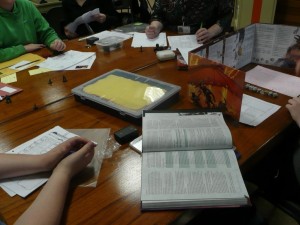 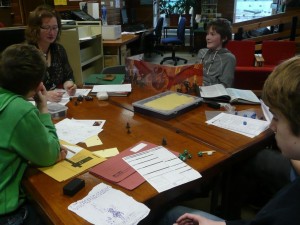 On Friday afternoons, there are three D&D groups run by pupils.  This gives me a chance to play for a change, in a slightly steampunk game designed and run by a second year pupil.  This game also is a bit of a hybrid between 4e and 5e which is working fairly well.  Our characters are running from an army and have now found themselves in a cave system to get through the mountains.  We were last seen to be trying to deal with a horde of goblins and a sleepy troll cuddling a chicken – don’t ask!

Lunchtimes – The library continues to be a busy place with anywhere between half a dozen and 30 pupils visiting, depending on time, over the course of the split lunch.  Computers are well used, mostly for leisure use, but work will always get priority.  Some folks come in to read and / or chat quietly which in most cases is acceptable, but when noise levels rise words will be said.

It is important that food and drink are NOT brought into the library.  This Librarian was rather put out on the weather closure last Friday – tidying a very messy fiction section is tedious enough but to find stale, hard, mouldy bread and empty bottles of milk shake behind the books was beyond a joke. 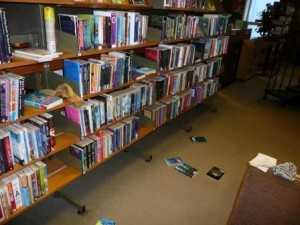 Tidying in progress. The books on the floor indicate how much has been randomly shelved and needing put in the right section, let alone those just dumped at the end of shelves. Please help to keep everything tidy.

More words will be said about this.  Both the Junior and Senior Fiction sections have now bee given a good tidy and I would hope that library users respect this and take responsibility for helping to keep everything tidy and food free. 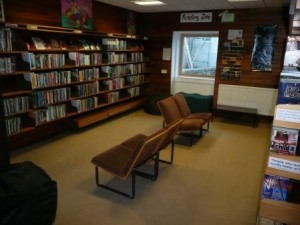 The trading card game, Magic the Gathering, continues to be very popular as a self-directed lunchtime activity and I am not averse to a game or two myself.  MtG is also a popular Friday afternoon activity.  A couple of other table top games have also been tried – Necromunda and another, whose name currently escapes me.  Warhammer occasionally features too. 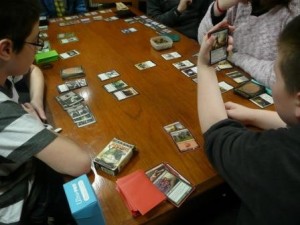 Lessons – January was fairly quiet in terms of class bookings with the English department library periods being the only ones.  In mid-February S2 PSE will have five weeks in here doing Careers Information Literacy Skills prior to their S3 subject choice.  Planning meetings, emails and discussions have already taken place and the tricky logistics appear to have been worked out – time will tell.

Last term, S1 pupils submitted ‘alternative book reviews’ as part of the Library & Information Literacy Skills course.  They could do whatever they wanted, whether it was a poster, mobile, model or game as long as it wasn’t a traditional written review.  Their imagination was the only limit.  A great selection of ideas was produced.  Pupils, in library period, spoke about what they did and about the book.  The work was displayed in the English corridor and now some is in the library. 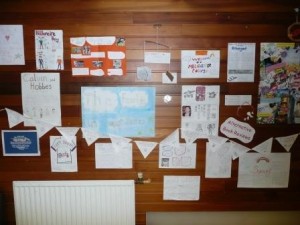 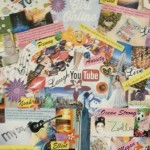 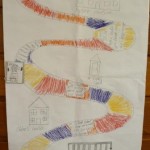 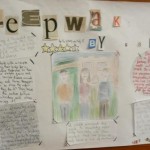 Recently S1 and S2 pupils, during library periods, were given the opportunity to browse catalogues, leaflets and the excellent Teen Titles magazine and make some selections for the library.  This gives them an opportunity to get involved in stock choices.  Budget constraints do mean that not everyone’s suggestions can be acted upon, but at least they can go on a wishlist.

Careers Resources – We are expecting a delivery of new careers books any day now (weather and boats (or planes) permitting).  Back in November / December an offer of free books was flagged up on School Librarians’ Network and I looked into it.  In this economic climate, this was too good an offer to miss so a number of books on different careers were ordered.  Parents or pupils interested in getting their own copies can find a list of resources available here: How2Become.  The website itself could also offer useful careers and choice information.  More information on these books will be provided in due course, when they arrive in school.

Links to careers websites and LiveBinders are available in the LibLinks section of the blog.

Stan Lee Excelsior Award for Graphic Novels & Manga – At the time of writing the eight graphic novels on the 2016 shortlist should be winging their way to Orkney, having been delayed by lack of stock.  This is frustrating as the order was placed just before Christmas and we have now lost a month of reading the books and shadowing this award.  The display is nearly read and just awaiting the addition of the books.  Pupils are invited to come along to a meeting on Thursday so that we can get the shadowing of this award started –  books or no books!  We have also ordered the five books of the Junior Award, even though we are not eligible to shadow that.  They will make a good addition to our growing collection of Graphic Novels. 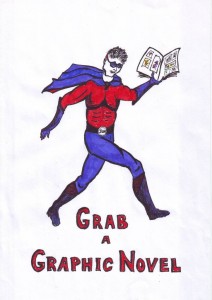 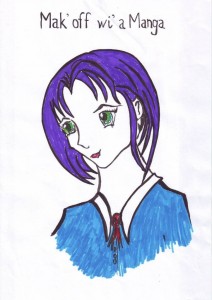 Online Resources – We have continued to subscribe to Complete Issues.  This potentially useful resource  has been under used despite termly reminders to staff and pupils.  The subscription will be reviewed at the next renewal, but please do look at it in the meantime as it is potentially a very good resource for current and moral issues for discursive essay, etc. Further information can be found here.  Username and password is available from the library.