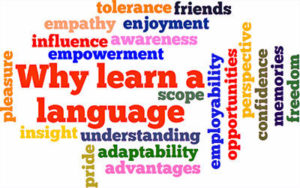 The Modern Languages department teaches pupils from S1 to S6 not only languages but also different cultures. Language and literacy skills are important in your personal, social and working life. You need good language skills for self-expression, thinking and learning.

The modern languages department in St Margaret’s recognises we are a school community enriched by native speakers of many languages, including Polish, Rumanian, Mandarin, Arabic, Hungarian, Malaysian, Italian, French, and Spanish among others.

Our aims in language teaching are to

Learning a new language allows you to connect with different people and their cultures. The ability to use language is at the centre of thinking. You reflect, communicate and develop ideas through language.

Spanish is useful for both business and travel. Around 460 million people worldwide speak Spanish, especially in South American countries such as Mexico and Venezuela. Spain is a beautiful country rich in history and culture, making it a popular holiday destination for British people. And, Spain is also an important trading partner of the UK. Many companies need employees who are fluent in one or more European languages. So, learning Spanish gives you many options for your future career.

The skills you develop in Spanish are useful in many different career areas such as travel and tourism, languages, teaching and in trade and industry.

French is an official language in 29 independent nations. These include: Belgium, Canada, Switzerland and many countries in central and North Africa. It is one of the official languages of the European Union.

It is a valuable second language in many different career areas and, of course, is useful when you are on holiday or travelling in France and other French-speaking countries.