This week in literacy we finished our novel.  We all really enjoyed this book and found it interesting.  We built up some character descriptions for a few of the main characters then we used these to play a game of ‘Guess Who?’

We also wrote an imaginative story on ‘The Day Sports Day Went Wrong’.  We had some very good ideas. including: people floating away during a race, a giant pig attack, a zombie apocalypse, aliens landing on our grass and acid rain! P6/5 definitely have a wild imagination!

SPORTS DAY! All of us participated in sports day which was great.  Some of our favourite events were: basketball, football kick, hockey dribble, standing long jump, shuttlecock throw, speed bounce, bean bag throw and the sprint!  Our competitors did really well in the sprint and ran a really good race! Well done to Eken who came 3rd, Lewis who was runner-up in 2nd place and Ellie who was the Primary 6 CHAMPION! We also had some class members in the winning teams.  Well done to Nathan in the 3rd place team and Justin in the WINNING team!!

We handed in our Personal Projects this week.  Everyone has been working really hard at home and the outcomes were FANTASTIC! We all had the chance to look and read everyone’s projects yesterday, and we found out some VERY interesting facts that we did not know.  For example, did you know that Evan’s Great Gran was born, raised and worked in the New Lanark mills? He also thinks there is some relation between him and David Dale! Interesting, eh?  Did you also know that the wool in New Lanark was also used in Harry Potter?  Emily was also interested to find out you could get married there – very ambitious! 🙂

We have also been planning our very own ‘Ladywell New Lanark Tours’.  We have been working in groups to provide the public with a very special New Lanark tour.  We looked at the map to identify the areas that tourists can visit.  We have then used our knowledge and facts we have learned to write a commentary for the tour, some of us are even preparing our very own Audio Guide! We are very clever in P6/5!

PS. It has been a long wait for you to find out the winners of our scavenger hunt, but the winners were Emily, Ellie, Brooke and Emma finding a Chrysanthemum flower at the entrance.  Well done girls!!

Our week started well as we were off school on Monday 🙂 A few of us visited New Lanark on our day off, which was FAB!

When we came back to school we were back to work straight away!

We have been exploring lots of different 2D and 3D shapes – making nets of shapes and different 3D objects (See pictures below).  We also learned how to use a compass to draw different circles and make a circular patterned picture.  We also explored different triangles!

We had a visitor in class to find out how we got to school everyday.

Some P6’s also got to meet their buddy’s when they were in for their visit.

We have also enjoyed this sunny week by having a few outdoor learning experiences – a scavenger hunt, and a big game of rounders!

The winners of our scavenger hunt will be announced next week – stay tuned to find out more next week! 🙂 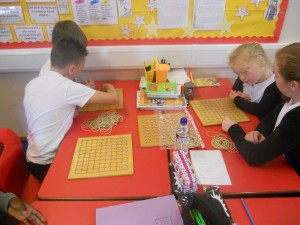 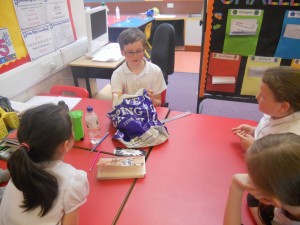 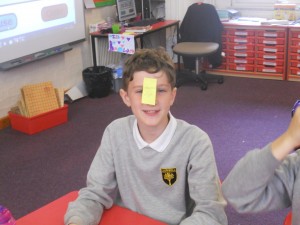 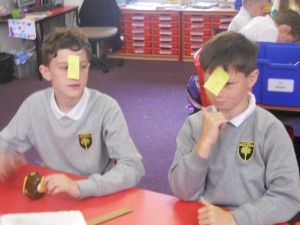 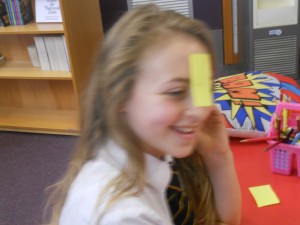 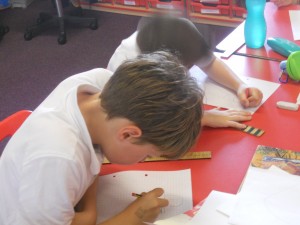 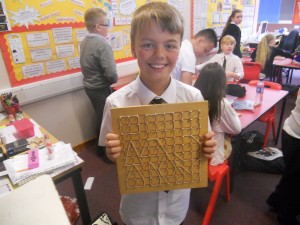 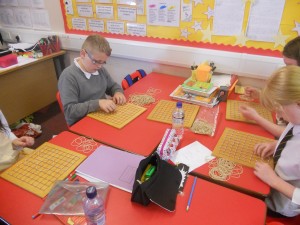 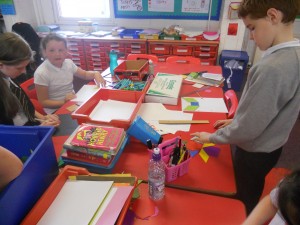 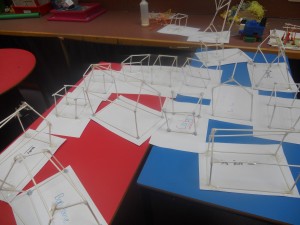 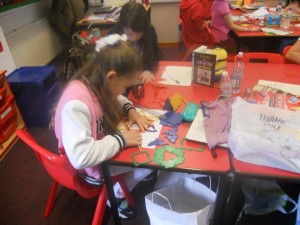 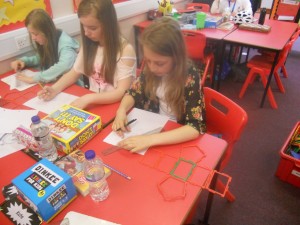 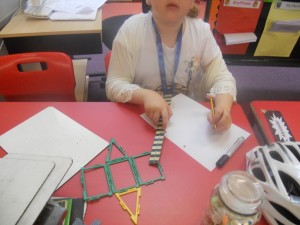 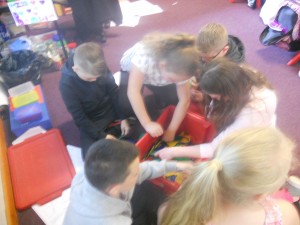 We have been taking part in lots of different activities. At the beginning of the month our class made an assembly all about our Brown Trout and it was EPIC!! We made such a good job of our own assembly that P4/3 asked us to write a song for theirs. Well done to our winner Brooke 🙂

We also started our new topic on New Lanark. We learned that David Dale founded New Lanark in 1786. We also learned that Richard Arkwright was a famous Inventor that created the Water Frame and started the industrial revolution. We became inventors like Richard Arkwright and made models of what we thought the Water Frame would look like (have a look at us in action below).  This was more difficult than it looked and only some of them worked. 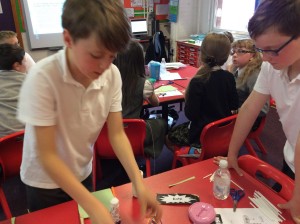 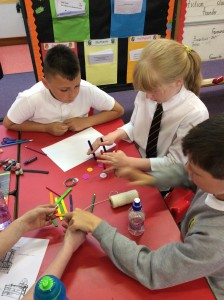 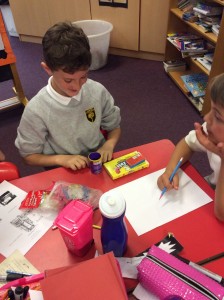 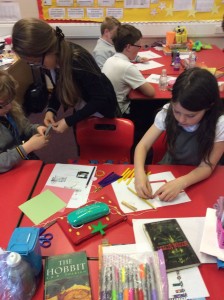 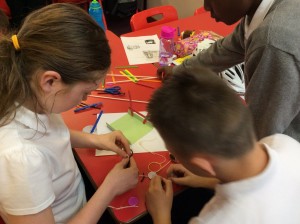 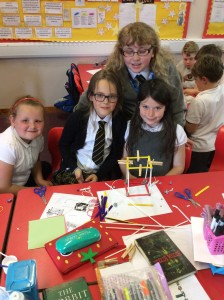 On Wednesday, P6/5 went to Fir Park Football Stadium.  We got the bus to the stadium and when we arrived we met the Motherwell captain Keith Lasley!!  We were welcomed by a nice lady who showed into the stadium.

We were introduced to Ross, a Bodyworks on tour representative, from Glasgow Science Centre.  He showed us many different experiments.  At first, Jennifer had to try and beat the lights by running from one end of the hall to the other, bouncing a ball and returning before the lights went out.  She did so well!

Ross told us about different types of fat and the impact these fats have on your body.  He did an experiment using a bottle, fairy liquid, peroxide and some form of salt.  This was to show the burning feeling you get in your muscles when exercising.

Afterwards, Miss Brown got electrocuted several times to cause cramp in her arm. She then had to write her name to see the difference from writing without cramp to writing with cramp.  Miss Brown did NOT enjoy that at all!!

We were then taken a tour around the ground, through the tunnel and round the park.  We even got to see where the managers sit!

We were taken on to the astroturf to have a kick-about and enjoy the sunshine!

We had a great time!

Have a look at our pictures below 🙂 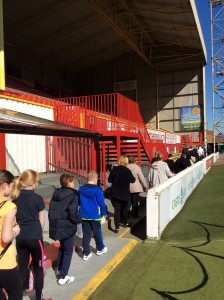 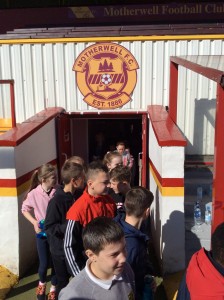 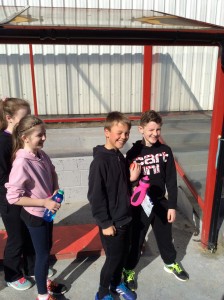 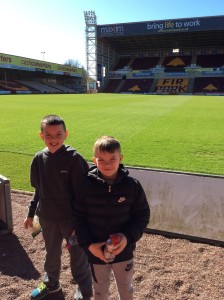 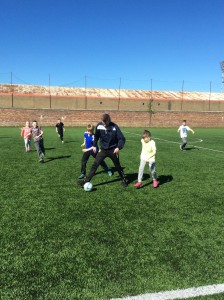 Welcome to blogs.glowscotland.org.uk – North Lanarkshire. This is your first post. Edit or delete it, then start blogging!