Magician Allan taught us some magic words. They were “STOP, LOOK, LISTEN, THINK” – he also taught us the actions using the song ‘The Hokey Cokey!’

There were lots of magic tricks! We made a picture turn from black and white to colourful and we saw Magician Allan take lights out of his reflective jacket – we don’t know how he did it!!

Magician Allan brought along his dog Robbie. Robbie was very frightened because he had almost been hit by a car when he was trying to get an ice cream. Allan and Robbie did a magic trick to remind us to only cross the road when it is clear. They put a needle through a balloon and it didn’t burst!!

The last part of the show we met a lollipop man. Allan had drawn him on a whiteboard but he could move his eyes and speak!

It was a great show and we all became Magician’s Assistants! Here are our favourite parts…

“I couldn’t believe that the lollipop man could move his eyes and speak! I really liked that part!” – Cara

“I liked when Allan took the lights out of his reflective jacket and put them through his ear and out the other side!” – Ellie M.

“I liked meeting Robbie the dog and hearing what he had been up to!” – Kyle

“I couldn’t work out how he did his magic tricks!” – Millie

“I liked when the needle went through the balloon and it did not burst!” – Erin 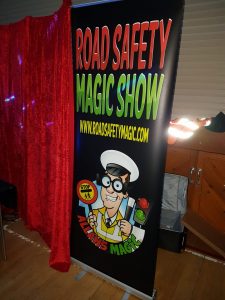 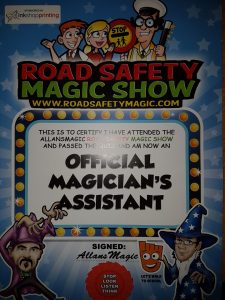