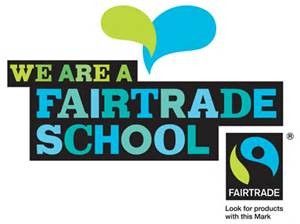 Holy Cross completed the Fairaware and Fairactive award for Fairtrade last year which means we now have full Fairtrade status.

This year we are trying to renew the Fairachiever award that runs out in July.

Last year we baked cakes with Fairtrade chocolate and also made Fairtrade tea and coffee. We had a Fairtrade lunch day and had to bring in a Fairtrade item.

At assembly we talked about farmer Foncho’s bananas. In Holy Cross at Fairtrade fortnight all classes took part in learning about Fairtrade we watched a video about a 12 year old girl who looked after her younger brothers.

The Fairtrade Committee have planned some future events :-