In S3, students are expected to be able to assemble and utilise the equipment necessary to record and manipulate audio.

The equipment you need to be able to use is:

Almost all modern computers are powerful to run recording software. Traditionally, the music industry use Macs as it used to be the case that they had higher specifications or where more suited to handling large audio files. As a result, some popular audio software was made Mac-specific. While the majority of professional studios still use Macs, there are many that now use Windows computers as well. 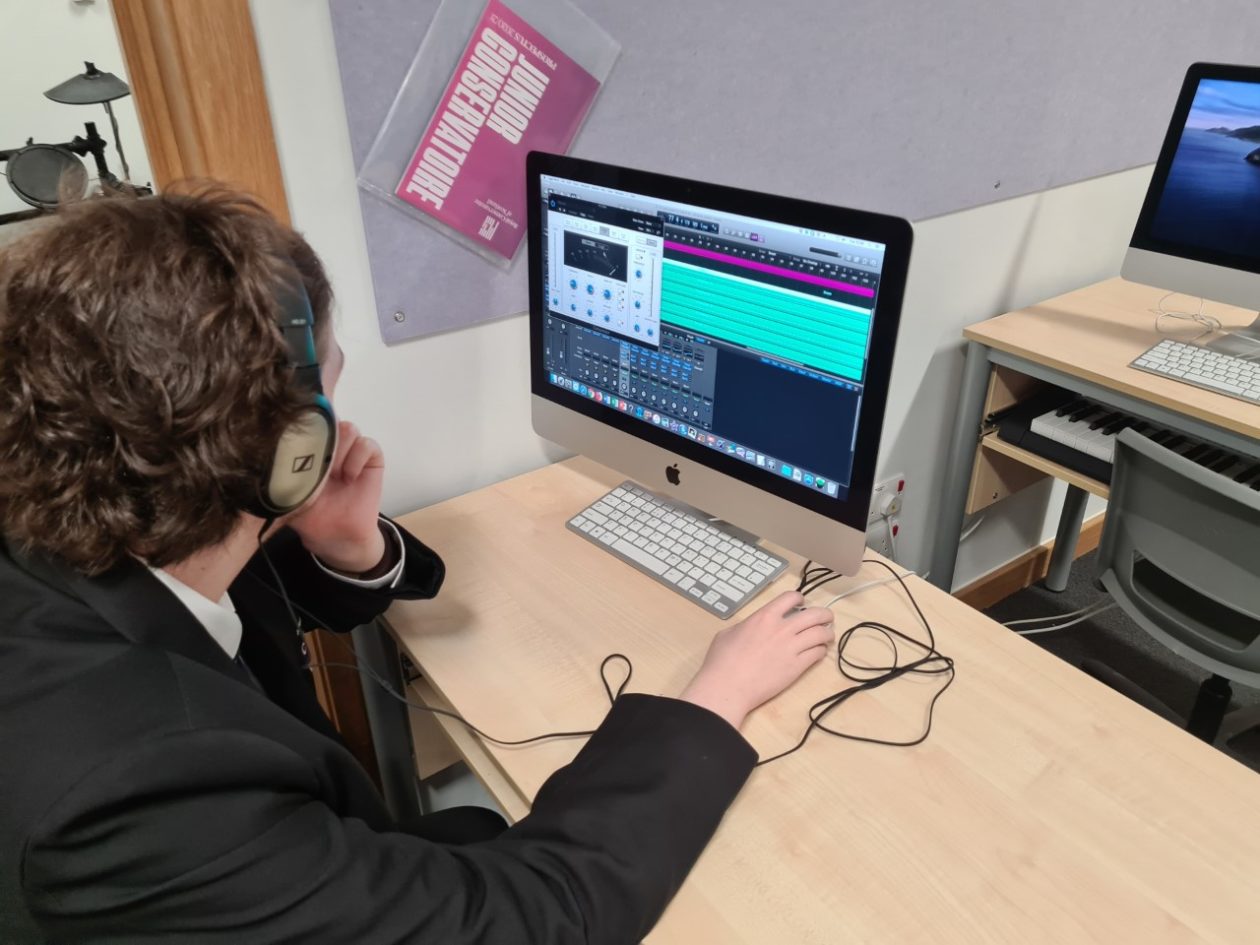 This is the software that allows you to record, edit, mix and master your tracks. In school we use Logic Pro X, a widely used and popular professional software now owned by Apple. Avid Pro-Tools is possibly the most industry standard software; other good examples include Cubase, Fruity Loops and Reaper.

An audio interface lets your hardware (microphones and equipment) talk to your software (DAW/Logic Pro X). It converts the analogue signal which travels from the microphone along the XLR cable, into binary code which the computer can then understand. When setting up to record, your Mics and instruments plug into your interface, which then sends the signal to your computer to record.

A mixing desk combines signals from multiple instruments/sources and combines them into a stereo output. For example, 6 microphones could be used to record a performance. Each mic is plugged into the mixing desk using a XLR cable. The mixing desk then combines the six input signals into just 2 output signals (a left and a right) which are sent to the speakers for the audience to hear. Mixing desks also allow you to adjust the volume, panning, EQ and usually add different effects, such as reverb, so that you can customise the sound. 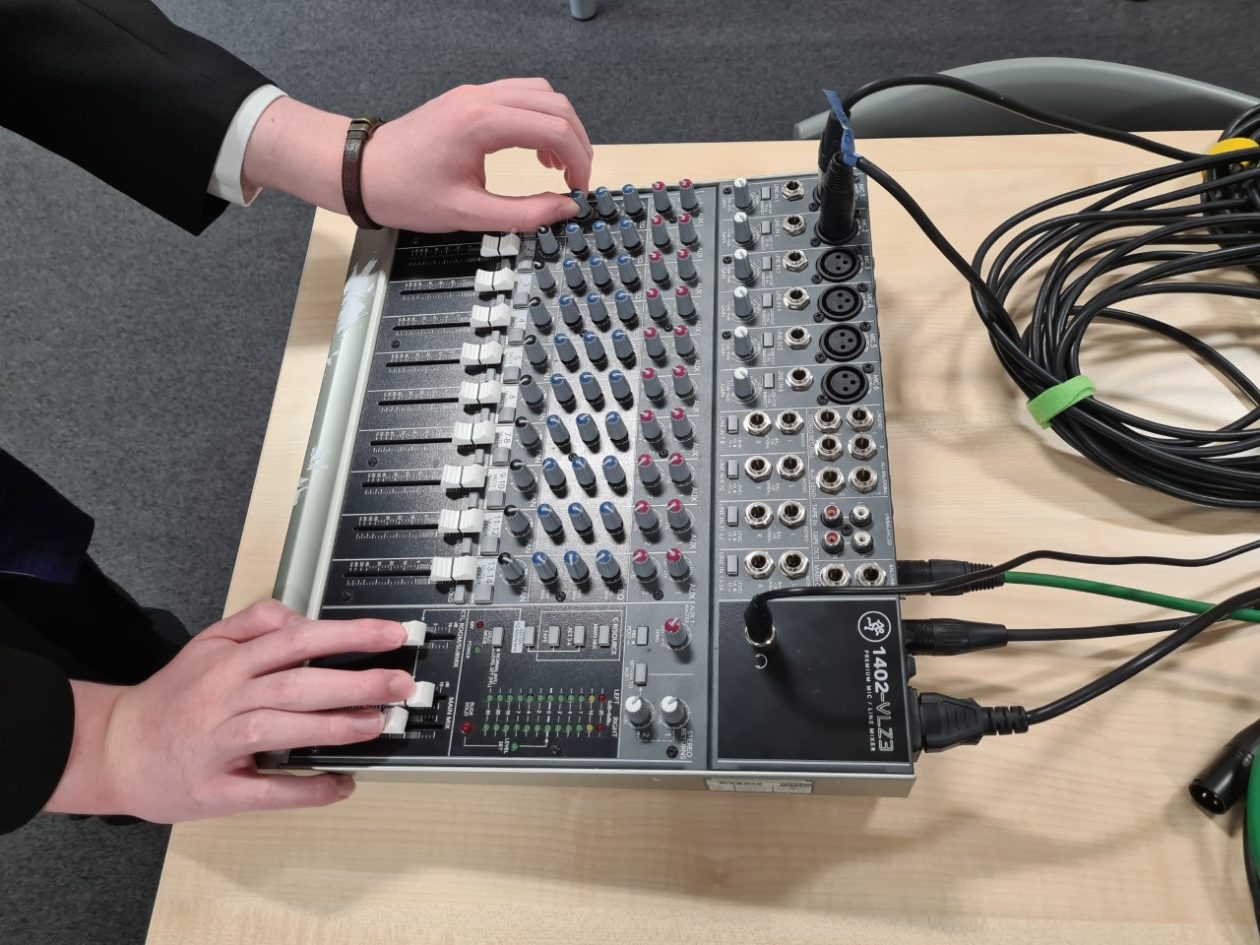 Microphones come in two main types, dynamic and condenser. Dynamic mics are simpler and cheaper, they are better for recording loud performances without causing feedback and are generally more robust and less likely to break. They are great for live performances.

MIDI stands for Musical Instrument Digital Interface. A MIDI keyboard is an incredibly useful tool when writing music on a computer. Unlike a normal classroom keyboard that plays a note when you hit a key, a MIDI keyboard sends an instruction to your computer to play a particular note.  It is then up to you to assign a particular sound to that note. Also, if you change your mind later, you can change it to a different note entirely. Think of a MIDI keyboard as a computer keyboard in the shape of a piano. You can also get them in other shapes and sizes such as drums or even wind instruments.

Allows you to hear your recording in enough detail so that you can edit and apply effects and processes to improve the sound. Unlike speakers/headphones you might use at home, studio monitors/headphones have a very flat EQ response to make the sound as realistic as possible. Normal consumer speakers will tweak the EQ to try and improve the sound slightly, giving you a slightly distorted sense of your recording. 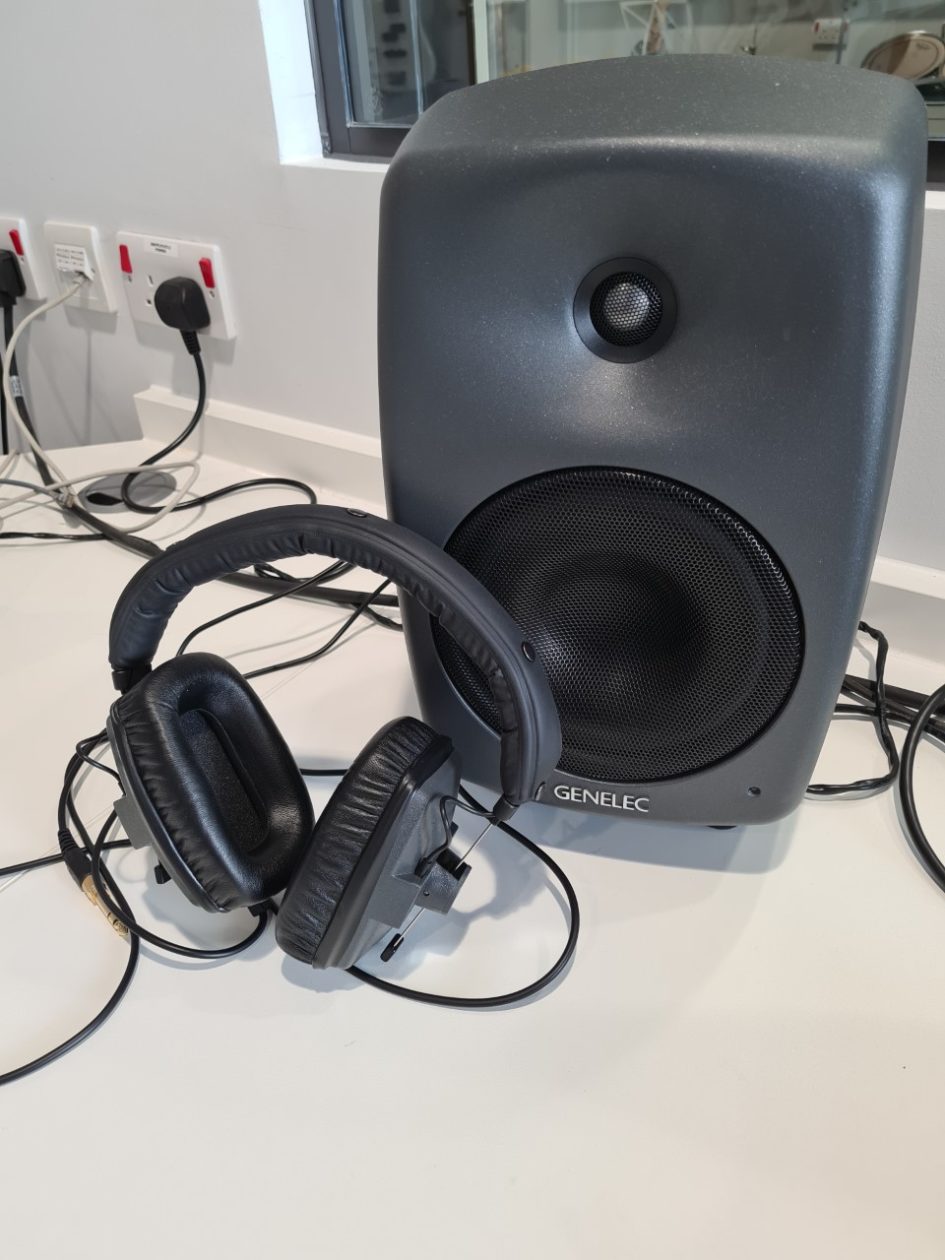 Used to connect instruments or mics to audio interfaces or mixing desks. They are also used to connect speakers. Generally speaking, Jack cables are unbalanced, whereas XLR cables are balanced; meaning they can send signals over long distances without picking up interference. Instruments requiring Jack cables, such as guitars and keyboards, would often use a DI box to make the signal balanced if it needed to travel a long way to the mixing desk. 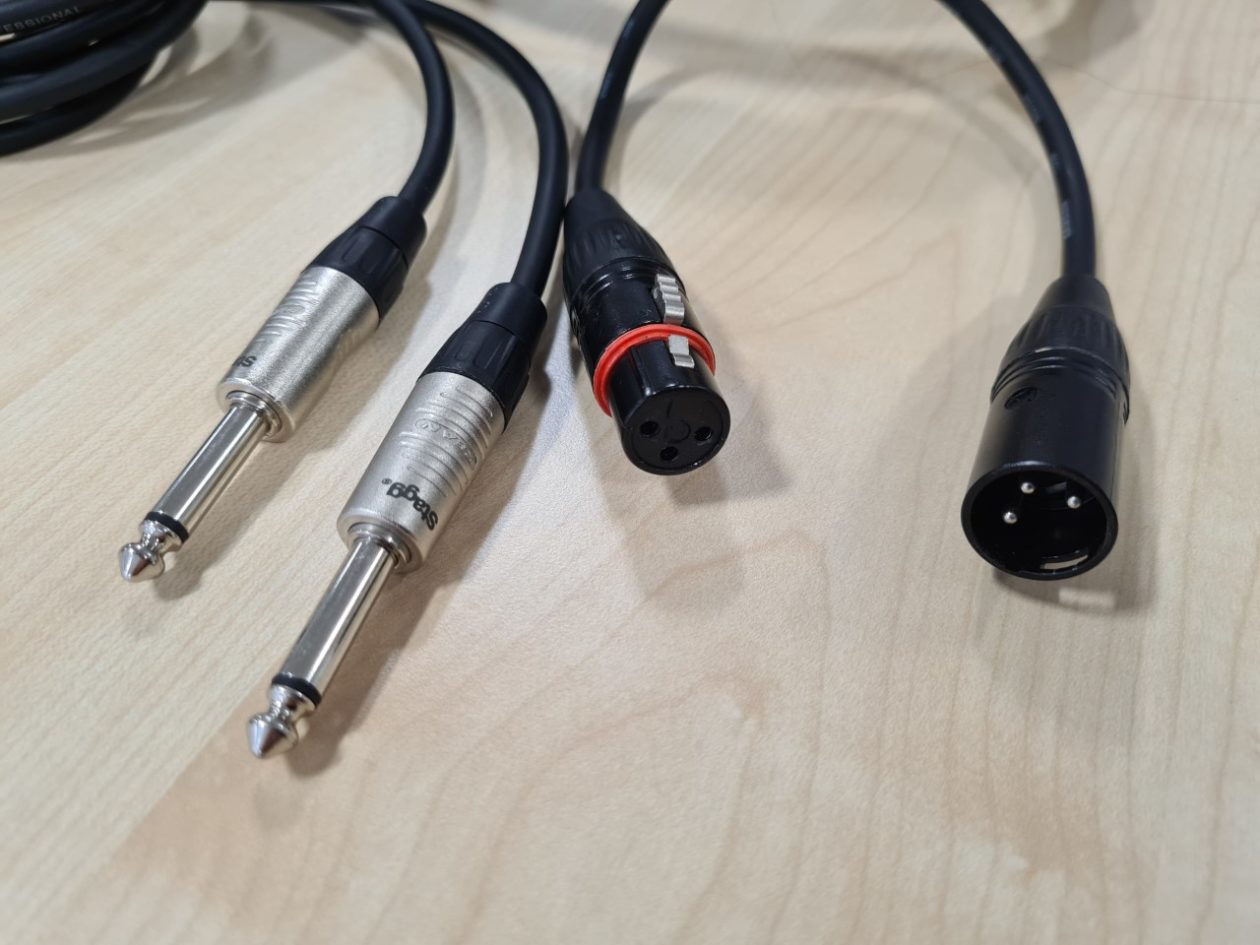 The position of the mic is vital to get a good signal level when recording. Distance from the sound source and angle of the mic effect the sound significantly. A mic stand is a versatile piece of equipment that allows you to play the mic perfectly. This is usually within 30cm of the sound source which is known as ‘close-micing’. 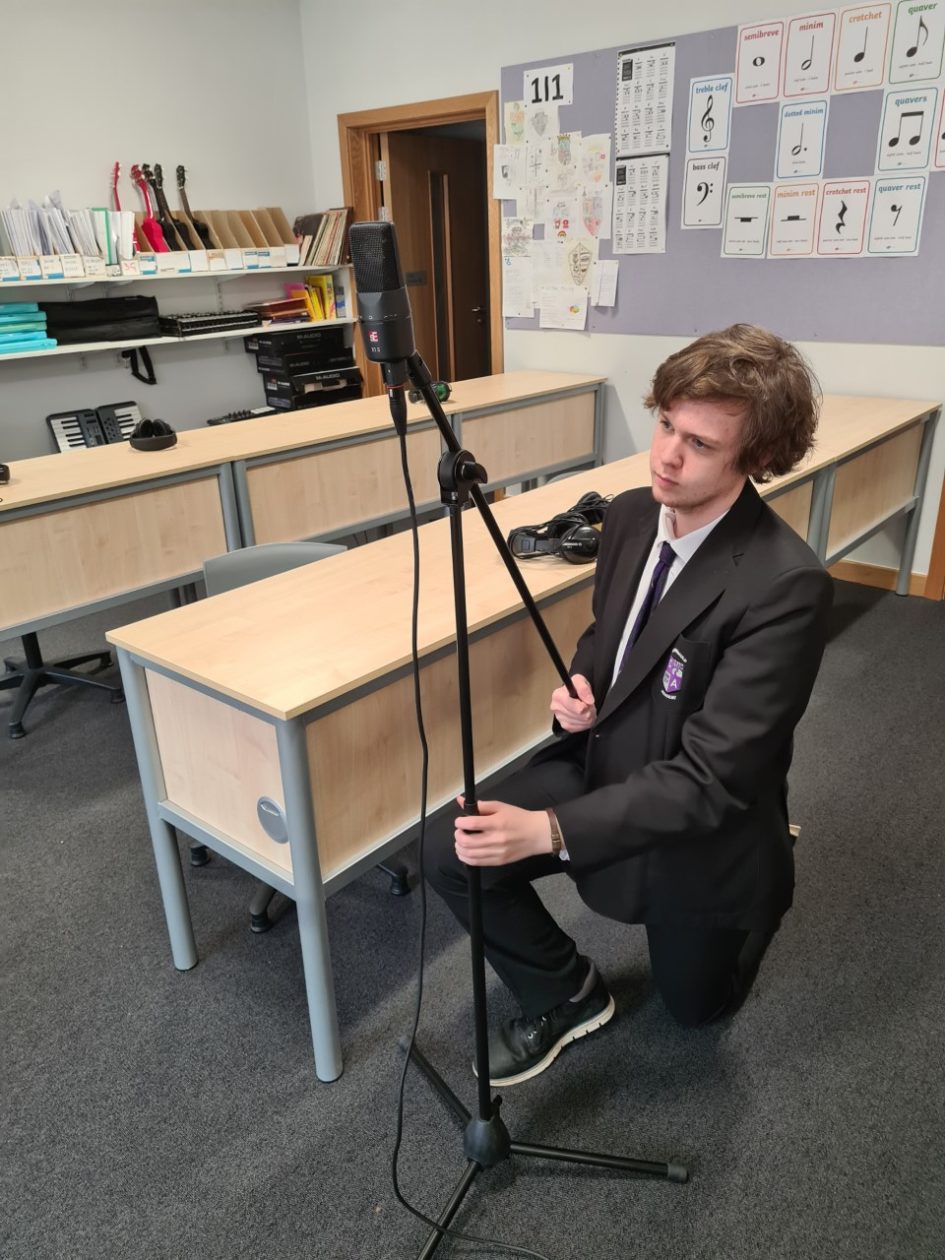 When recording vocalists ,or sometimes wind instruments, the movement of air towards the microphone can cause a ‘pop’ or ‘blast’ sound as the air hits the microphone. This is particularly noticeable when vocalists use ‘p’ or ‘b’ syllables. To reduce the problem, a fine mesh filter is placed in front of the microphone which allows the sound wave to travel through, but breaks up the burst of air, reducing the popping sound. This works in the same way as the fluffy or spongy wind-shields you sometimes see reporters using outdoors. 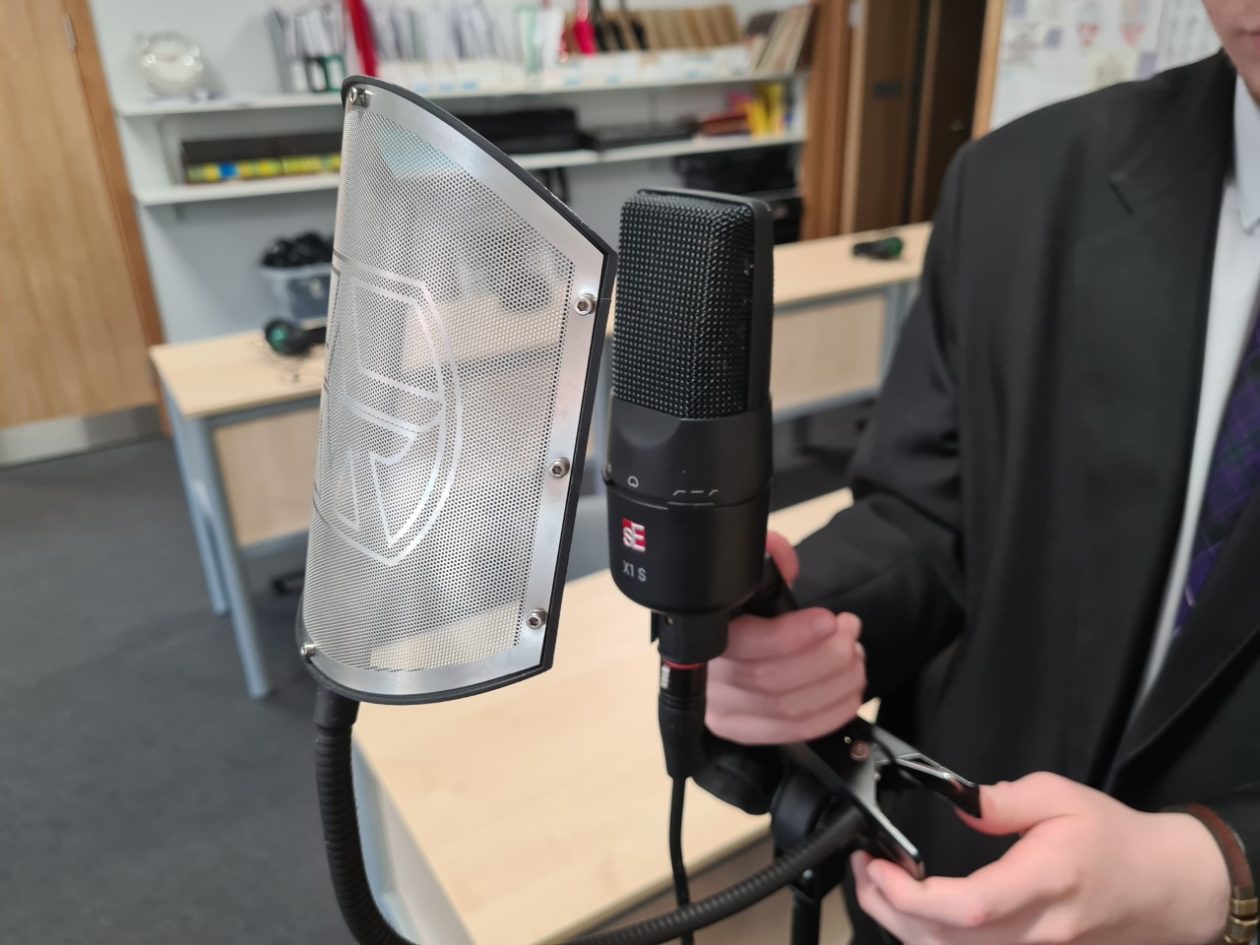