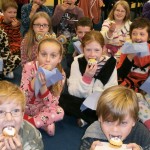 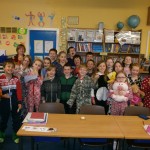 Pupils and staff dressed in pyjamas to raise money for Children in Need and we raised over £400. We were invited to buy some cakes from P5 and we enjoyed the delicious cakes in our class before we even attempted our Maths Problem Solving! It definitely helped us to concentrate and get more problems solved than we usually manage on a Friday morning! In assembly Reverend Slack talked about helping others and praised us for the amount we raised. We love singing the songs in assembly when he plays on his guitar! 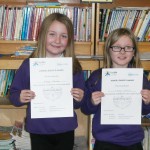 Emmy and Louisa have been training since before the summer to become Junior Leaders and have just passed their Junior Leader assessments with Mrs Armstrong and Sarah Liebnitz. The received their certificates at the Achievers Assembly on November 8th along with the other 14 Junior Leaders. Junior Leaders are trained to help others in the playground, organise games for other pupils and to be responsible for the playground equipment. It is a big responsibility and we are very proud of you girls! 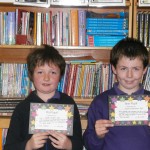 Jack was nominated for trying hard with his work – especially his maths. His friends think he is loyal and they enjoy being with him because he has a good sense of humour.

Fraser was nominated because he is working hard on learning his table facts, he is well-mannered and friendly with everyone. Well done, boys!

Lochardil Primary School claims no credit for any images posted on this site unless otherwise noted. Images on this blog are copyright to their respectful owners. If there is an image appearing on this blog that belongs to you, and you not wish for it appear on this site, please E-mail us with the link to the image, and it will be removed.