When you think of teachers most people have that stereotype of “they don’t do much”, “They play all day” and the most common one “Teachers get lots of holidays!”. These are exactly that…stereotypes! I have occasionally thought about the stereotypes teachers have but I had never, until attending this lecture, thought about other stereotypes from other professions such as Social Workers or Community Learning & Development workers.

As a group we discussed the stereotypes we had heard or even thought ourselves and we tried to dispel those. In reality it boils down to the media and the way in which these professions are portrayed. Google “Social worker” and you are faced with a barrage of news articles about how they have failed such and such a child. We never see the good only the bad. What about those hundreds and thousands of social workers every day who give support to the families that need it. Nobody mentions the social worker who is so involved in her cases that he/she continues to think about it even when at home.

Teachers. Yes, they get long holidays but even though they may not spend time inside of their classroom they are spending their spare time buying new resources for their classrooms, discussing which books or movies their pupils would love to see, worrying about that child who is struggling….It isn’t just a job but a vocation.

CLD…What is CLD? Nobody knows and that is the problem. CLD workers need to be given more limelight. They are a precious stepping stone in between a teacher and a social worker. They provide a lot of frontline help and support for thousands of families and children around the UK but they never seem to get the appreciation they should.

Structural Inequalities… Well what can i say apart from I felt bullied, picked on and not good enough because my group didn’t have the same tools as everyone else. Of course! This was a test. Well it worked! My group did the best with what we could but it didn’t stop us from feeling like we weren’t good enough. No child should ever feel like that but they do. As a student teacher i need to build on the foundations i am given to ensure that none of the children in my classroom ever feels worthless, not good enough or picked on. Equality is hard to achieve as a whole but if I keep it simple and let my pupils use their imagination and start them off on an even footing then I will be happy that they are equals in the classroom even if they aren’t equals at home. I’d love to change the world and make it fairer but I cant.

I am now understanding these other professions better. I’m thinking about how we can all work together to provide a better future for the next generation of adults in Scotland. The media has a lot to answer for! I want to be a big part in providing the best opportunities I can for children when they are in my care. 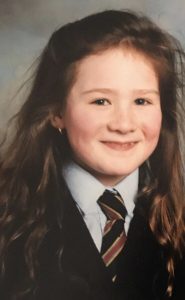 It was 1998 and my ultimate goal was to become a teacher. My Primary 6 teacher at the time was inspirational, developing my skills, teaching, encouraging and enabling me to help others. He had a thirst for life and was always singing songs, reading us adventure stories and I loved going in to school. Since then I have been building on this foundation to improve on my teaching and communication skills. Throughout secondary school I had planned to continue on to uni to study for a degree in Education. I achieved good Standard Grades but as I was studying for my Higher exams my parents separated and it affected my ability to concentrate. I stayed at school but I let my studies dwindle, preferring to spend time with my friends. Then I realised I could make a lot of money without a degree…

I spent 12 years working, bringing up my children and doing the “family” thing. However, something was always in the back of my mind…I still wanted to be a teacher! Was it too late for me? My husband didn’t think so. Following the birth of my second child I was offered redundancy and this was the opportunity to change our life for the better. With my children in full-time education, I went to college and finished my Highers. Look at that… It turns out I do know what I am doing and I can pass exams. As well as attending college four days a week, I helped out in a primary school, one day a week for a whole year. I was allowed to take small reading and comprehension groups and I also got involved in Maths and in P.E. lessons. I continued to work in a pre-school two afternoons each week, which has given me a good overview of the curriculum for all ages from three to twelve.

As a parent I have enjoyed watching my children achieve something new, learn to read, write or count and to continue developing their skills. Watching my own children has given me a great sense of achievement, knowing that I have helped them to achieve it has confirmed that teaching is for me!

My confidence in my own ability is returning! I will use this second chance and I will work hard to achieve my degree and finally achieve 9 year old me’s dream not only for me but for my children!