Today we had a presentation from Dr Ellie Hothersall on how statistics are used within medicine and how important it is to have the basic maths knowledge to be able to work out simple calculations that are very important for a medical professional.
Some of the many things discussed through the lecture included drug doses for children, fluid prescribing, NEWS test which could tell the doctor how well or unwell the patient was, BMI, foetal/bump growth, mortality rates and growth and reduction of diseases. All these things are vital for doctors, nurses and other medical professionals to be able to carry out and all require pretty basic maths skills.
In school, when doing maths, a very general theme that can be seen is that you’ll never need to use this outside of school in the real world. But in reality, many professions do use maths on a day to day basis so it’s important to know the fundamentals so that you are able to do your work without embarrassment or fear that you may do something wrong. For a doctor, for example, when working out what drugs to give to a child you have to take into account their weight so that you do not give them too much or too little of a drug. A mistake in calculations could be potentially fatal, as if someone is given far too much or far too little of a drug their electrolytes can be harmed which causes damage to cells and bodily functions. Even though the calculations are very simple, one small mistake could cause a lot of damage.
This is the same with the NEWS test. This test is completed by doctors or nurses and is used to look at a person’s health when in hospital. Different variables are measured, such as temperature and heart rate, and are plotted on a scale. All the points are then calculated, and a final score is worked out. The more red that is seen on the chart or the higher the score is, the more unwell a patient is.
Statistics can also be used to show Hospital Standardised Mortality Ratio (HSMR) which is a bar graph which shows the mortality rates for different hospitals across a country, in this case, England. However, there are many variables that contribute to mortality rates such as how many patients come into the hospital, the age of the patients that enter the hospital, the reason they are in hospital including others. This means the tests have to be somewhat modified, the mortality rates that are included in the graph have to be altered so that the data that is compared between the different hospitals is as similar as possible. This is done to make the statistics fair, but is it really fair if they are being slightly altered? This is one big problem with statistics as they can often be manipulated to show what the company or product want people to see and other parts of the data can be ignored.
This ties in well the discovering maths module as it relates to Liping Ma and her suggestion that all teaching professionals need to have a profound understanding of fundamental mathematics including basic ideas – the beginning principles of maths taught from a young age. We need to be able to teach pupils the basic ideas of maths appropriately so that they can go onto use these skills in their future professions too.

As a child I wasn’t particularly sporty. However, I did try. In my 6th year of school I did crash Higher PE which was certainly an eye opener to how bad at sport I really was. I was forever put in the good team, instead of the really good team but this didn’t mean to say I didn’t try. It just wasn’t meant for me. For my higher performance I did dance, as this is the one sport – even though I was constantly reminded by the boys in my class that it wasn’t a sport – I really excel in. As part of this I had to analyse and evaluate my performance looking at how I stayed in time with the music and with the others I was dancing with etc. And now I think about it, I was using some maths that I didn’t realise before. Although this is the basics of maths such as counting to 8 to make sure I do each move on the right beat, it still counts and is one of the Basic Ideas talked about by Liping Ma.

In the session yesterday with Richard, we were looking at how maths is used in sport in particular football. It is used in the score, timing so you know the length of the match, formations, points, the league table and I’m sure there could be more. We then went on to look at a table of the first ever premier league season, which is very different to how we see it today. We then had to convert it to show how it would be shown today. This shows how maths evolves and how things can be simplified to make it easier for the consumer/customer to observe and understand. It’s also important to be able to understand many Basic Ideas of maths in order to be able to enjoy the things we do. You wouldn’t think maths had a lot to do with football but if you couldn’t count, read numbers, tell the time etc. you wouldn’t be able to enjoy such simple things in sport as the majority of us can. 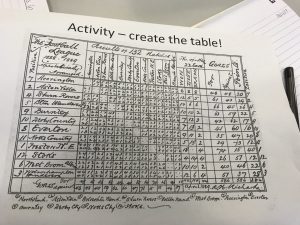 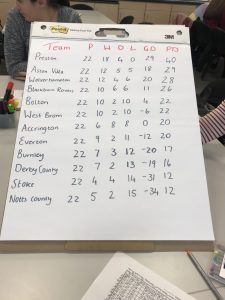 The updated version of the table.

We also created our own/adapted current sports to have new rules/equipment in order to make some of the mathematical features more prominent/important. I think this helped identify why some things are in place in sport e.g. changing a win in football from 2 points to 3 points as it can make for a more exciting game or a more exciting league/title race. It also helped identify what mathematics is actually involved within different sports when you wouldn’t really notice them otherwise.

In last week’s input with Anna we were looking into the relationship between maths and art. We looked at Mondrian, Fibonacci and the Golden Ratio – Phi.

Piet Mondrian was a Dutch artist who focused on Pointillism and Cubist art. His art was very geometric and is seen a lot in modern day art. – https://www.guggenheim.org/artwork/artist/piet-mondrian?gclid=CjwKCAjwssvPBRBBEiwASFoVd_XWXluR5gKRvWAB9ZhvVXuoW08LlVXAJYz3SyyIHQROWYoqqD5VpBoCdMYQAvD_BwE 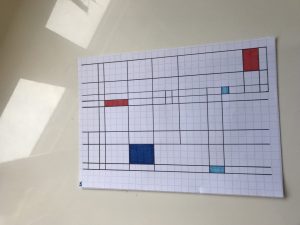 My take on Mondrian’s art.

When creating my Mondrian style art I wasn’t exactly sure how it related to maths as I wasn’t focusing on any maths concepts when doing it. I think this would need to be brought in explicitly so that children were actually learning some key maths concepts for example using the art to look at angles. However, I do think this is a good way to relax the pupils as when doing it I felt very calm and at ease which can enable learning (Hayes, 2010).

Next we went on to look at Fibonacci. This was something I had heard of before as I had done it in school myself. The sequence begins at 0 and 1, naturally, and goes on by adding the two numbers before it. E.g. 0 1 1 2 3 5 8 13 21 34 etc. The numbers of the Fibonacci sequence can be used to draw squares on graph paper in a spiral or circular direction. As you can see on the picture (ignore the blue lines – mistakes made by me along the way) the sequence begins in the centre with 1cm square then to the right another 1cm square is added. This is because in the Fibonacci sequence 0 + 1 = 1. The sequence is then continued, 1 + 1 = 2 so a 2cm square is added and so on. 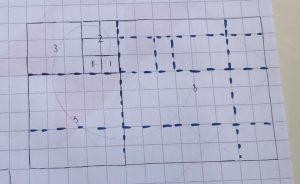 This can then be used to draw a spiral from the middle of the first square and through the centre of every square on the page. This is known as the golden spiral or the golden ratio which can be symbolised by Phi. This video clip explains the spiral and how it’s seen in nature.

Phi denotes a special ratio of line segments. This ratio results when a line is divided in a special way. The lines are seen in the rectangles created on the graph paper. For example, the squares of 1, 1, 2 and 3 beside each other show a rectangle. Pickover (2009) said “we divide a line into two segments so that the ratio of the whole segment to the longer part is the same as the ratio of the longer part to the shorter part”.

The line which can be used in the formula.

The formula can be used with any rectangle in the sequence and the answer will come out to 1.6 every time or very close. This answer is seen by artists to be the number of beauty. This might explain why it’s seen in so many beautiful natural and living things on the planet, or maybe it’s another phenomena with no explanation which makes our planet so wonderful.