Last week in an input with Eddie we explored how to make maths fun in our classrooms.

The activity we did involved looking at tessellation – fitting shapes together to make a pattern with no gaps. We had to cut out the shapes we wanted – from a choice of triangles, squares and pentagons – and design a pattern which involved the shapes fitting together with each other. We were then to stick our patterns onto card and could paint them if we wanted to. 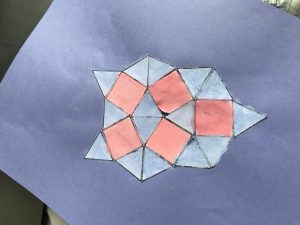 When completing the task the atmosphere in the room was very calm and relaxing, everyone was focused on what they were doing and the basic processes of cutting, sticking and designing a pattern were somewhat therapeutic. I could feel zen in the room, or in myself at least.

So, the objective of the task was to show the importance of making maths activities fun for pupils. I personality wouldn’t use the word fun to describe it, but I have a different outlook of what fun is compared to a child in primary school, although it was enjoyable to complete the task. When I was doing something that I actually took pride in and wanted to finish I wasn’t thinking about how this was actually doing maths – which made me think it’s always important to relate to the maths side of the task and not just a fun arts and crafts activity, but both. It’s necessary to show the links to the mathematical concepts so that pupils are still learning.

I tried to take this on in my own practice and created 6 different angles stations in my formative observation in 1pp1b. Some stations included an angle tarsia, an angle treasure hunt and an angle poster which the pupils had to measure and name the angles on the poster created with bright tape. I could really see the concentration from the pupils when doing something active for a change, as there was a lot of textbook maths in my class. Doing tasks in different ways and allowing pupils to see there is not only one method or one way to do something is very important, bringing change into maths makes it exciting and not the same thing every day. (Boaler, 2009).