I am from and live in a small town called Stevenston in North Ayrshire.  I found this task very interesting as I’ve never really explored where I live to this extent or thought about the different elements in this task.  I took a note of what I thought my answers would be off the top of my head to each element of this task before exploring my town properly as I thought I knew it well.  I was very surprised to realise that I missed a lot of key aspects.  This is what I found when exploring Stevenston noting down the different elements.

With this little overview I feel it makes Stevenston sound quite large however this probably sounds large in my mind due to the fact everyone living here splits it into two halves; top end of Stevenston and the bottom end of Stevenston.  All of these buildings except the factory are incorporated into the streets rather than sitting alone.  If you look at Image 1 the separation is clear, with the center cluster of buildings being the main street where the; doctors, pharmacies, library, dentist, pubs and most takeaways are.  Then down at the bottom right hand side is the factory.  It is clear there is a lot of green space around Stevenston however this makes you wonder, what greenery was destroyed in order to build the housing schemes.  Along the top of image one is the top of Stevenston which leads into the countryside.  A small chunk of this space is used by farmers however the majority is just unused fields therefore a lot of people take their dogs up in the fields or just merely walk up for exercise or leisure.  If you then look at the bottom of image 1 this green space leads onto the beach, which is very popular in the summer time with people travelling from Glasgow etc. to enjoy the sun and sand (when we get any). 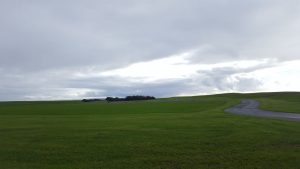 This green space is very popular throughout the year with children, as many children who live down closer to the bottom end of Stevenston play at the park and the green space as it has goal posts set up with a large space which is free for people to walk their dogs etc.  Image 2 is just a fraction of this space which is closer to the beach, as you can see it’s very large and very empty meaning it’s open for people to use as they please.

Many of the buildings in Stevenston are old and haven’t been changed from when they were first built.  For example my primary school over the past couple of year have been focusing on attaching more space onto their newly built section of school which resulted in the old building being knocked down last year, this building was built in 1875 however it suffered a fire which left part of the building standing in 1982 then this building lasted until 2015.

The organisation of roads in stevenston are very basic.  In image 1 I have highlighted the main road in red, this leads from the roundabout at the very start of stevenston after Kilwinning.  It splits quickly into two separate roads – one through the center of Stevenston town and one which by-passes Stevenston taking you straight into Saltcoats.  All the other roads, (apart from the third larger road which isn’t highlighted as it leads to the factory) are very small as they merely lead off into streets.  These roads are far too over crowed, to the point most roads actually only have one road available.  This is due to the fact most/all houses are attached with no driveways or carparks available, or one driveway with the home owning 2 cars.  Road space is very finite in Stevenston, especially when you drive through the streets as shown in Image’s 3 and 4.

In Stevenston the most common forms of transport are cars and buses, this causes a lot of problems such as little to no parking spaces at schools or convince stores and bus seats being very finite during peak times.  Image 5 highlights the fact theres no parking spaces left within the school car park (this is the secondary school) which means lots of parents are parking up along the pavements which in my opinion is very dangerous when the children come out of school as they cross the road and have to walk out from cars.  It also makes a very unfriendly environment as parents get annoyed/hostile when having to drive past these cars or the people in these cars have these feelings due to cars not letting them out onto the road.

As there is a train station in Stevenston there are two trains which pass through here.  One being the train from Largs to Glasgow which is only busy at peak times and even then the train is not full until Kilwinning, then the other train being the one from Glasgow to Largs or Ardrossan which again is only busy until Kilwinning then from there it’s quite quiet.  The trains aren’t very frequent going through Stevenston which means it can be quite inconvenient to the public as many times they will have to get the bus to Kilwinning and then get the train.  Another small issue is the fact there isn’t a service desk in Stevenston therefore many people who have queries or want to buy a weekly ticket etc. will have to do so online or at another stop.

Above I have already listed the fact there are: 4 Primary schools, 1 Secondary school, 2 Community centers and 1 Library.  Most primary schools have the children from the area attending it, children from the top of Stevenston are never saw to be in Ardeer Primary School which is situated at the bottom of Stevenston.  However all pupils from the 3 non-denominational schools are normally seen to move up into the one secondary school however pupils from the Catholic school are normally seen to attend the Catholic secondary school in Ardrossan.  The community centers are used for lots of things such as: birthday parties, kid classes, adult classes, teen organisations, open safe space for children to use and a space in which anyone can use for a number of activities.  The library in Stevenston is used sometime’s by the primary schools and also by members of the public who need to use the computers or printing system, many people still sometimes use to borrow books also.

Stevenston doesn’t have a lot of work to offer however it does have some apprenticeships which are offered by North Ayrshire Council and the ICI which is the Nobel Industries Limited.  This factory is an explosives factory founded by Alfred Nobel and it is quite well known.  This factory brought many jobs in the past to Stevenston.  Other work here includes: a butchers (which sometimes offers apprenticeships), 3 barbers, McDonalds, The Red Squirrel, KFC, B & Q and B &M.  This is where most of the work in Stevenston comes from therefore it is obvious why most people work outwith this town.

There are no recreation spaces in Stevenston however right between Stevenston and Saltcoats is the KA Leisure Center which contains a swimming pool, a gym and an ice rink.

Stevenston is surrounded by the countryside and also has the coast running along the bottom therefore we’re quite lucky, we have no busy roads running through our town and no major pollution (other than the use of cars).  No recent housing schemes have been built nor is there any real need for one therefore at the moment our country side seems safe!

Stevenston has a small population density of 155 people per square Km.

Our air quality is very good at a low level 1.